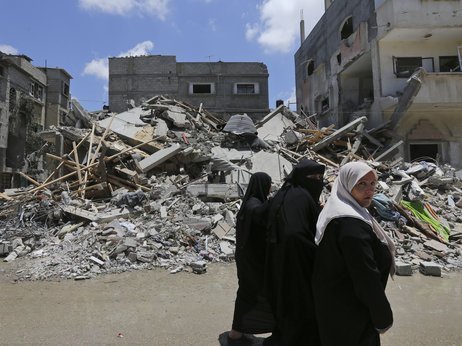 Palestinians walk by the rubble of a house destroyed by an overnight Israeli missile strike on Monday.

Egypt has proposed a ceasefire between Israel and Gaza that would take effect Tuesday.

Egypt’s foreign ministry has called for Israel and Palestinians in Gaza to de-escalate their conflict by 2 a.m. Eastern Time (9 a.m. in Israel). A full ceasefire would go into effect within 12 hours.

“The proposal, which was published on the eve of US Secretary of State John Kerry’s expected visit to Cairo, states that Israel would end all ‘hostilities’ in the Gaza Strip from the land, air and sea and would refrain from launching a ground offensive that targets civilians,” the Jerusalem Post reports.

Israeli Prime Minister Benjamin “Netanyahu supports the Egyptian proposal for ceasefire in Gaza and will ask the cabinet [to] accept it,” tweets Barak Ravid, diplomatic correspondent for the Israeli newspaper Haaretz, citing an “Israeli official.” But not all Israeli leaders are on board.

Hamas leader Ismail Haniyeh, in a televised address Monday, did not reveal how the organization, which governs the Gaza Strip, stands on Egypt’s proposal.

He did say that Hamas is “open to all initiatives to end Israeli aggression,” according to The Guardian, which is live-blogging reaction to the proposal.

If the two sides do agree to a ceasefire on Tuesday, it would be an unconditional truce. Within 48 hours of the ceasefire, both Israeli and Palestinian officials would travel to Cairo.

There, they would hold talks with neutral mediators, but not with each other.

Egypt mediated a truce between Israel and Hamas in 2012.