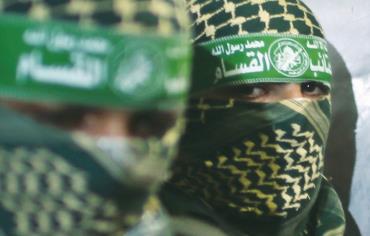 Hamas members are seen close up during a press conference in the Gaza Strip last week. Photo: REUTERS

One day after an Egyptian-brokered cease-fire accepted by Israel, but rejected by Hamas, fell through, the terrorist organization proposed a 10-year end to hostilities in return for its conditions being met by Israel, Channel 2 reported Wednesday.

Hamas’s conditions were the release of re-arrested Palestinian prisoners who were let go in the Schalit deal, the opening of Gaza-Israel border crossings in order to allow citizens and goods to pass through, and international supervision of the Gazan seaport in place of the current Israeli blockade.

Bishara, who fled Israel in 2007 after he was accused of aiding Hezbollah during the Second Lebanon War, estimated that the escalation would end within the next two days. He also accused Israel of agreeing to Tuesday’s short-lived cease-fire in order to legitimize further air strikes on Gaza after Hamas rejected the plan.

He said that Palestinian factions had been in talks with international authorities who would have accepted the terms Hamas has set forth, but the Egyptian initiative, which favored Israel and ignored the goals of the “Palestinian resistance,” brought all negotiations to a halt.

Bishara, who currently lives in Qatar, contended that Egypt’s shared interests with Israel and conflict of interest with Hamas prevented it from being an effective negotiator.

Instead, Bishara recommended that Turkey and Qatar, along with the US and other Western powers, lead the negotiations between Hamas and Israel.

On Tuesday, Hamas spokesman Sami Abu Zuhri said that the Islamist group had not received an official cease-fire proposal, and he repeated its position that demands it has made must be met before it lays down its weapons.

Hamas’s armed wing, the Kassam Brigades, rejected the reported text of the truce deal, saying: “Our battle with the enemy continues and will increase in ferocity and intensity.”