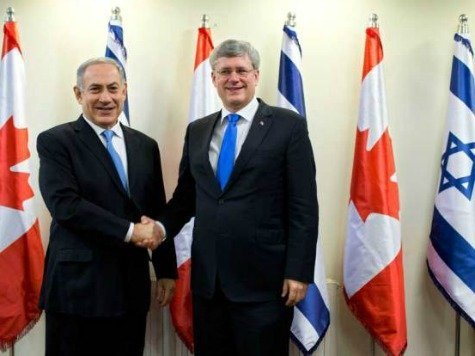 In a stunning rebuke of President Obama’s tepid calls for Israel to show “restraint” in response to daily rocket fire on Israeli civilian targets by Hamas terror redoubts in Gaza, Canadian Prime Minister Stephen Harper, long considered Israel’s best friend and strongest defender, all but condemned President Obama by name for what he regards as Washington’s irresolute support for Israel during its time of grave crisis.

In perhaps his most strongly worded statement to date, Prime Minister Harper proclaimed that self defense is “not merely an Israeli right” to be exercised only in the abstract, but an “Israeli obligation” that must be defended by all Western nations.

“Failure by the international community to condemn these reprehensible actions will encourage these terrorists to continue their appalling actions,’’ Harper said in a rare Sunday statement. “Canada calls on its allies and partners to recognize that these terrorist acts [by Hamas] are unacceptable and that solidarity with Israel is the best way of stopping the conflict.”

Forget about the U.S.-Israel relationship being the bulwark of Israeli security, say some. Israel’s best friend and staunchest defender is no longer found in Washington, but rather in Ottawa.

Ending the war does not require Israeli “restraint,” implies Harper. It demands the world declare that sole responsibility for the terror of violence belongs with the terrorists. It is Hamas, claims Harper, that is entirely responsible for the current Israel-Hamas war. “It is evident,” Harper asserts, “that Hamas is deliberately using human shields to further terror in the region,’’ and he takes several swipes at the United Nations and the “international community” for calling for Israeli restraint in the face of escalating rocket fire aimed at murdering and maiming Israeli civilians.

“Canada mourns the death and suffering of innocent civilians in Gaza. Responsibility rests solely with Hamas and its allies, who launched and continue to feed this crisis,’’ he said.

Harper rejects outright calls coming from both the White House and the UN that Israel agree to a negotiated ceasefire with Hamas. Not only should Israel not agree to a ceasefire, says Harper, Israel should continue her offensive until the Iranian-backed terror group is “massively degraded,” if not eliminated entirely. “Indiscriminate rocket attacks from Gaza on Israel are terrorist acts, for which there is no justification.”

Next to Israeli Prime Minister Benjamin Netanyahu himself, Canadian Prime Minister Stephen Harper has clearly emerged as Israel’s strongest and most unapologetic defender.

Speaking for Prime Minister Harper and Canada’s government, Foreign Minister Baird vocalizes things that Israel supporters no longer even fantasize about hearing from Washington, such as, “There is no moral equivalency between a democratic state and a terrorist organization” and that “Hamas militants hiding within its civilian population is abominable.”

Even more encouraging to Israel supporters may be that Prime Minister Harper’s full-throated support of Israel might be creating an all-party, transnational consensus on Canada’s Middle East policy. Although Canada’s two main opposition parties have adopted positions more in line with those taken by other Western nations, neither Labour nor the even farther-left New Democratic Party has publicly challenged the government’s position. And that may mark a sea change in the country’s Middle East position, which is less and less a conservative position and increasingly an all-party consensus.