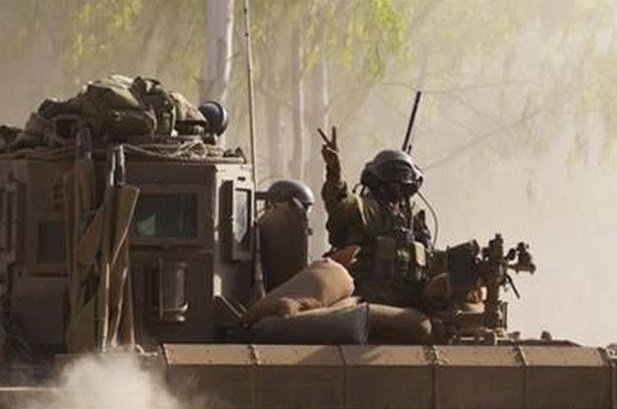 The Prime Minister’s Office has issued a statement that says the IDF has embarked on a ground assault into Gaza against Hamas’s tunnels.

The operation is deemed as “limited” and will probably not go further than two or three kilometers into Gaza’s territory. This is deemed to be deep enough in enemy land to find the openings into Hamas’s attack tunnels, like the one that was used in Thursday morning’s infiltration into Israel by 13 terrorists.

Large forces from the IDF’s infantry, armor, artillery, engineering and intelligence corps are operating in several zones within Gaza after breaching the security fence that separates it from Israel, in coordination with the Israel Security Agency (ISA, or Shin Bet) and with support from the air and naval forces. The zones are in Gaza’s northern, central and southern sections. The Diplomacy and Security Cabinet has authorized the IDF to widen the operation further at its discretion. 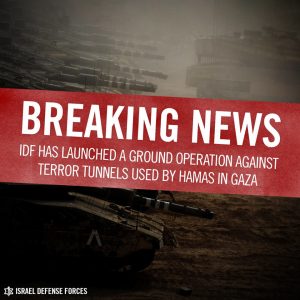 Egypt, meanwhile, has issued a statement saying that Hamas is to blame for the possible deaths of hundreds of Gazan civilians. The statement appears to have purposely been issued simultaneously with the statement from the Israeli Prime Minister’s Office.

Channel 2’s reporters said earlier that the IDF has unleashed a blistering artillery barrage against northern Gaza. They hinted that this type of barrage often precedes a ground invasion.

Also taking part in the shelling were tanks and naval gunboats.

More than 60 Hamas missiles rained down on Israel throughout Thursday, in one of the more intense days of missile fire since Operation Protective Edge was launched.

Hamas appeared more defiant than ever despite attempts to coax it into a ceasefire. As Israel declared a unilateral “humanitarian ceasefire,” 13 Hamas terrorists infiltrated Israel by tunnel but were discovered and may have escaped back to Gaza through the tunnel.

A man was critically wounded in Ashkelon when got out of his car to run for shelter during a Hamas missile attack and was hit by another car, a television news report said.

According to Channel 2, he was taken to hospital in critical condition Thursday night. 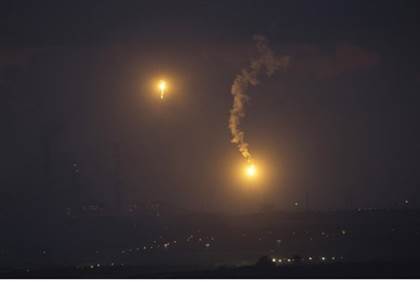 Dror Hanin, 38, a married father of three from Beit Aryeh in the Shomron, was killed Tuesday by a Hamas mortar shell as he gave out gift bags to soldiers at the Erez Crossing near Gaza. He was the first Israeli fatality in the course of Operation Protective Edge, which has been going on for ten days.