Twenty-year-old St.-Sgt. Eitan Barak from Herzliya was killed in Gaza on Friday morning; wrote on Whatsapp to his friend before entering. 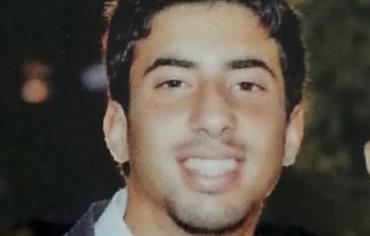 St.-Sgt. Eitan Barak, the first IDF soldier killed in Operation Protective Edge, engaged in a quick exchange with a friend via WhatsApp on his cellphone, just before entering the Gaza Strip on Thursday night.

“Hope to return in one piece and stick it to them,” the Nahal Brigade soldier wrote. 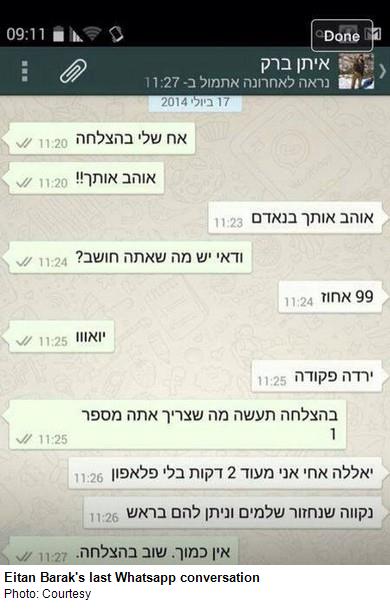 The army is investigating whether he was killed by a mortar shell fired by the IDF or by Hamas gunmen. Three other soldiers were wounded in the incident.

The following is a translation of their eerie exchange on WhatsApp, posted by his friend on Facebook:

Barak, 20, who was promoted posthumously from the rank of sergeant, is survived by his parents and older sister. An excellent student who matriculated two years ago from Tichon Hadash in Herzliya, he loved water sports and fought hard to be in a combat unit in the IDF.

He will be laid to rest at the Herzliya Cemetery at 5 p.m. on Sunday.

Sgt. Adar Barsano, who was also 20 and came from Nahariya, also spoke to a friend just before being sent with his Nahal comrades to the Gaza border, where he was killed on Saturday morning while repelling a Hamas terrorist infiltration together with Maj.

(res.) Amotz Greenberg, 45, from Hod Hasharon. Two other soldiers were wounded and admitted to Soroka Hospital in Beersheba.

Barsano reportedly killed one of the group of gunmen before being hit by one of their bullets.

“I’m going to Gaza,” Barsano had told his friend on Thursday. “Don’t worry about me.”

“He left for Gaza and left us with an empty space that can never be filled,” his friend said. “He was one of a kind, and he had a heart of gold.”

Barsano matriculated from the Amal school in Nahariya, and is survived by his parents, a 17-year-old brother, and a 12-year-old sister. His father works as a firefighter in Nahariya.

“He had been serving in the army for two years,” a friend said. “He was a real hero and died like a hero. His family is devastated. How did we get to a situation in which parents and grandparents are burying a child?” A lawyer by profession, Greenberg worked as head of the investigations departm ent at the Israel Securities Authority. Among other things, he led the recent investigation of alleged IDB share manipulation.

“Amotz was one of the pillars of the ISA for many years,” Hauser said. “We are all mourning and crying together with his wife and children.”

He grew up on Kibbutz Yotvata and lived in Hod Hasharon with his wife, Sagit, and three children.

“Amotz was at his prime,” Hauser said. “We have lost a dear friend, a loving family man, salt of the earth, who was killed while protecting Israel.