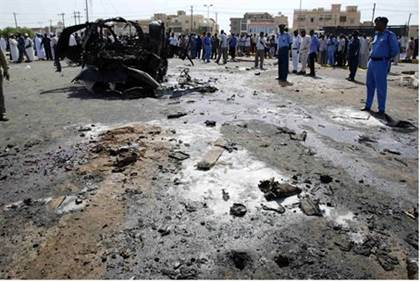 A weekend report said that Israel destroyed a warehouse in Sudan that contained Iranian missiles, destined for Gaza.

A report in London-based Arabic language newspaper Al-Arab  Monday said that Israeli planes over the weekend destroyed a warehouse in Sudan that was holding a large number of long-range Iranian missiles. The missiles belonged to Hamas, and were to be used against Israel after they were smuggled into Gaza.

According to the report, eyewitnesses said they saw a “huge explosion” after planes flew over the building. Six people were injured in the attack, witnesses said. The resulting blaze required the services of large numbers of firefighters, they added.

Sudanese officials confirmed that there was an explosion, but denied any connection to weapons or missiles. The officials did not accuse Israel of the attack, but did say that it was carried out by “foreign forces.

There has been no independent confirmation of the story, which did not appear in any other publication. Israel has not commented on the story.

In October of 2012, Sudan claimed that Israeli airstrikes caused an explosion and fire at a military factory south of the capital, Khartoum, killing two people.