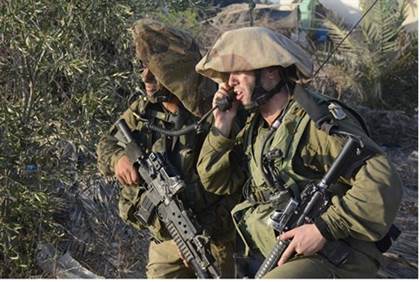 The IDF’s initial investigation regarding Hamas’s latest infiltration attempt from Gaza proved shocking Monday, after it revealed that Hamas has been blending into the Israeli side of the border – by replacing their clothing with replicas of IDF uniforms.

The terrorists who attempted to infiltrate an Israeli kibbutz earlier Monday changed their headgear for IDF helmets, according to the report, as well as other similar-looking gear.

As a result, it said, forces on the ground did not recognize for several minutes that the “unit” within sight was actually a terror cell.

The revelation was only uncovered after a commanding officer asked his unit at the scene to identify the other unit, and a second glimpse revealed that they were carrying Kalashnikov assault rifles instead of IDF-issued guns.
The terrorists then opened heavy fire at the IDF soldiers, who eliminated nine terrorists; the remainder fled, likely back to Gaza.

Southern Command Leader, Sammy Tourjeman said during an afternoon press conference that the tunnels are a tangible threat.

← MAJOR NEWS OUT OF ISRAEL: Report says IDF destroyed Iranian missiles in Sudan meant for Hamas
Singing ‘One Day’ from a Bomb Shelter…POWERFUL →