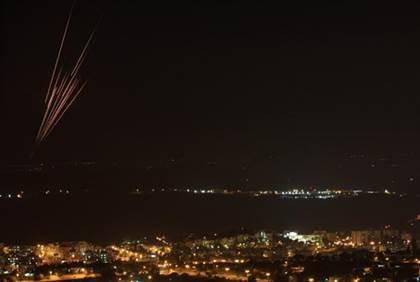 Gaza terrorists fired a sudden barrage of rockets at Israeli cities at around 9 p.m. Tuesday.

Rocket sirens were heard in the coastal cities of Holon, Bat Yam, and in Modiin, located inland between Jerusalem and Tel Aviv. Sirens sounded in Samaria, as well.

Terrorists also targeted Israeli towns near Gaza, as they had done on several previous occasions throughout the day.

No injuries or damage were reported in the attack. The Iron Dome defense system shot down two incoming rockets.

Earlier in the day Gaza terrorists fired on the Tel Aviv region. Shrapnel from one rocket hit a courtyard in the town of Yahud near Ben Gurion International Airport, causing damage. The Yahud attack prompted several international airlines to suspend their flights to and from Israel.

A short time later, terrorists fired on the southern cities of Ashdod and Ashkelon.

The frequency of rocket attacks has dropped since the beginning of Operation Protective Edge in Gaza. IDF commanders say troops have successfully destroyed over 1,700 terror targets, including rockets, launchers, and launch sites.