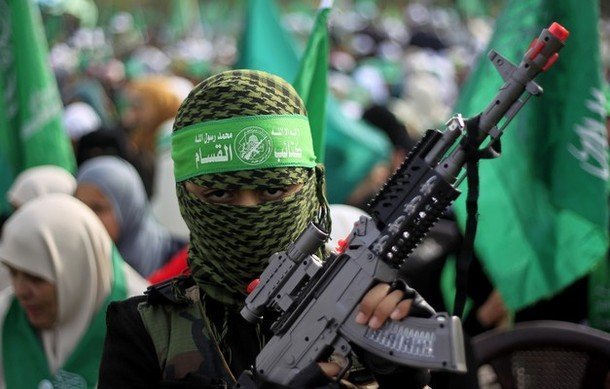 A Palestinian boy dressed as a member of the Ezzedine al-Qassam Brigades, the armed wing of Hamas, holds a toy gun as he attends celebrations for the 24th anniversary of its foundation in Gaza City on December 14, 2011. AFP PHOTO/MAHMUD HAMS (Photo credit should read MAHMUD HAMS/AFP/Getty Images)

TEL AVIV – Amid international calls for a cease-fire, the Iranian-backed Hezbollah organization is already implementing plans to rearm Hamas in the Gaza Strip with more missiles following any truce, according to informed Middle Eastern defense officials.

Israel, meanwhile, continues its aerial offensive aimed at minimizing Hamas’ rocketing capabilities as the Arab League and the European Union join other international calls for a truce. Among them are Secretary of State John Kerry, who has offered to broker a cease-fire.

Diplomatic sources in Jerusalem say Israel is willing to discuss a 48-hour respite in the military campaign targeting Hamas’ terrorist infrastructure while a longer-term truce is negotiated.

The sources said it is Hamas that has rejected the truce, believing it can still achieve a mass-casualty event inside Israel so that it can emerge from the week-long confrontation declaring a “victory.”

To that effect, Hamas attempted Monday to escalate its attacks with bombardments of southern Israeli communities and foiled attempts to send drones into Israel.

One drone was shot down with a U.S.-supplied Patriot missile as it flew over the southern city of Ashdod. Video footage of the explosion indicates the unmanned aircraft was carrying a large payload of explosives that could have been used to carry out a devastating attack.

Hamas claims it successfully flew two more drones over Israeli territory Monday, one armed with missiles. It claims one unarmed drone flew over the Tel Aviv headquarters of the Israel Defense Forces.

IDF said it was not aware of any drone activity over Tel Aviv.

Hamas says all drones deployed Monday were models of the Ababil-1, an Iranian-made drone.

Egyptian military sources told WND the Hamas claim of flying a drone over Tel Aviv is being taken seriously.

Hamas, the Egyptian sources said, laid out its conditions for a long-term truce, including the reopening of Egypt-Gaza crossings and the release of more than 60 Hamas officials arrested by Israel in the West Bank in response to the kidnapping and murder of three Israeli teens.

The operational room, commissioned at the direction of Iran, is in Lebanon. It is coordinating with Hamas command and control in the Gaza Strip, the defense officials said.

In another alarming development, the defense officials said the Iranian-backed Islamic Jihad terrorist organization is not answering to Hamas and is shooting rockets into Israel at times without the approval of Hamas leaders. The move could complicate any cease-fire achieved between Israel and Hamas, and it gives Iran more discretion over the Gazan Palestinian arena.

The reopening of an operational room between Hezbollah and Hamas signifies the rapprochement of cooperation between Iran and Hamas in the current crisis in Gaza. In the last two years, Iran has tempered its relationship with Hamas because it failed to aid in any significant way the regime of Iran’s ally, Syrian President Bashar al-Assad, which has been facing a Sunni-led militant insurgency.

On the ground, the strengthening of Hamas-Iran ties could have two major implications for Israel.

First, Israel could face coordinated rocket attacks from both Hamas in Gaza and Hezbollah in Lebanon. On Friday, one Katyusha rocket was fired into northern Israel, prompting fears of the opening of a second front against Israel. On Monday, two more rockets were reportedly launched from Lebanon.

← This Is So Bad It’s Funny!
IDF soldiers back from Gaza enjoy some R&R with singing and dancing →