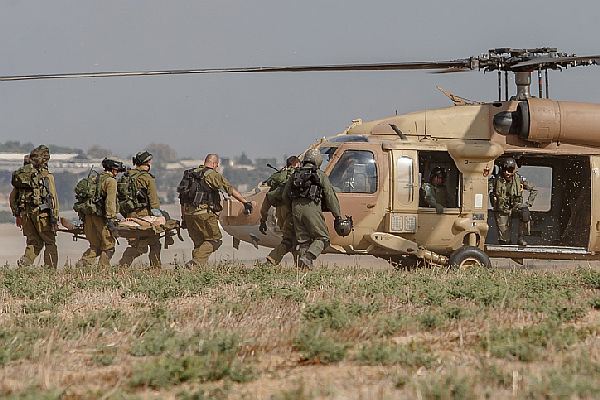 An injured Israeli soldier is evacuated by helicopter from near the Israeli border with Gaza Strip on July 21, 2014, following heavy fights between Israeli soldiers to Palestinian militants. The Israeli army Spokesperson’s Unit said two terror cells infiltrated into Israeli territory Monday morning through a tunnel in the northern Gaza Strip. Observation units identified the terrorists; Israeli Air Force planes attacked and hit the first cell. Israeli army forces deployed to the area killed some 10 terrorists from the second cell. Photo by FLASH90

Shiloh Hadad’s escape from the targeted APC was an open miracle. He was the only one to make it out unscathed.

IDF soldier Shiloh Hadad is the lone survivor of the Golani 13, a combat team of fierce Israeli warriors who saved two kibbutzim from a massacre by Hamas terrorists just after dawn on Monday.

All 10 Hamas terrorists were killed in the battle.

This is his story, as told to his parents, who were rewarded with a 15-minute visit and a hug to reassure them their son was still alive after hearing the news that seven of his comrades had died in the battle to protect Kibbutzim Erez and Nir Am, both located along the Gaza border.

Hadad was the eighth man in the APC (armored personnel carrier) that responded to a report of terrorists swarming from two tunnels at dawn’s light between the two kibbutzim.

His APC was ambushed by the terrorists – all wearing IDF uniforms, complete right down to the shoes. It was for that reason that Israeli Air Force pilots, who identified them from above, were reluctant to fire.

Instead, ground forces engaged the guerrillas, who fired a rocket-propelled grenade (RPG) at the forces, killing seven in a heavy firefight that left two others seriously wounded. They also fired an anti-tank missile at the APC, setting it afire.

Hadad was left in the APC — a fluke that had saved his life in the battle to that point — but what kept him alive was his gut instinct to get out of the vehicle, somehow, at the very last second — just before the terrorists fired an anti-tank missile at it and set it ablaze.

After the battle, when parents were informed the APC had been ambushed, Shiloh’s parents learned their son was in the Golani unit that had fought the battle, its APC a flaming wreck.

But as soon as he could, Shiloh called his parents to let them know he was okay, telling them, “You do not understand what has just happened to me.” They immediately set out to find him. It took hours to track him down.

“They wouldn’t let him go once they had their arms around him,” his aunt, Batsheva, told Hebrew-language media. “They held him 10, 15 minutes. But then after telling them what he went through, and how he was feeling, he said, ‘I have to go back in to the front, back to my friends.’ And he was gone.”

His aunt added that it was not clear how Hadad had managed to remain alive. “After that, he managed to escape but it is not clear how, and they had no time to talk.” Apparently the APC was struck by the anti-tank missile literally seconds after he exited the vehicle, she said. His lightning decision to leave the APC when he did is what saved his life — a miracle.

“The fog of war still hangs over the incident, but it is likely that after the operation is over we will find out more details through the investigation into the incident,” she said. “But one thing is certain: Shiloh is a Golani warrior. He went through a really serious battle, but he insisted on going right back to Gaza.”

Five other IDF soldiers, all members of the Golani Brigade, also died in battle Monday fighting against Hamas terrorists in Gaza.