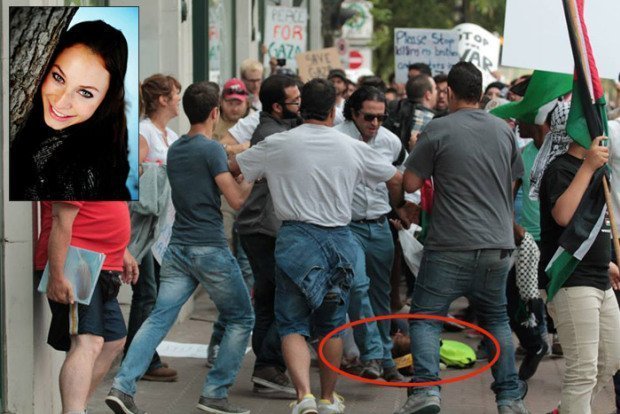 “Free,free Palestine”. 22-year old Calgary native Samantha Hamilton (insert) lies unconscious on the ground after being brutally beaten by six “pro-Palestine” thugs. A “pro-Gaza” demonstration turned into a lynching of a small group of Canadian Jews holding a token demonstration on the other side of the street.

The Middle-East is a depressing place. Today the Levant serves as a cautionary tale in how quickly societies can tear themselves to pieces when the only dominant ideologies are extremist ones.

A lesson, apparently, which many Western societies seem to be losing sight of. Against the backdrop of the current conflict in Gaza, the past few weeks have seen synagogues attacked in Paris, and openly anti-Semitic demonstrations in Germany. And an attempted lynching of Jews in Calgary, Canada.

Yes, Canada. When Syrians went out to demonstrate for change in 2011, everyone had their own idea of the kind of society they wanted Syria to emulate. For me personally, that society was Canada.

But on Friday 18th of July, Canadian values were blatantly and contemptuously disregarded as a demonstration of a thousand “pro-Gaza” demonstrators turned into a brutal and vicious assault on a group of ten pro-Israel Calgarians, who at the time were holding a token counter-protest.

The account of the violence inflicted on the small group is sickening. A middle-aged woman who had been recovering from surgery was repeatedly punched.

A young man had the Israeli flag he was holding tied around his neck noose-like, and dragged along the streets.

A young woman was set upon by no less than six thugs and beaten unconscious. Another young man had the shirt ripped off his back, was bitten and beaten into a concussion.

All because the mob of “pro-Gaza” rioters found the open expression of an opposing view deeply offensive. And apparently, the only answer to such “offense” was to physically and barbarically assault those deemed to have inflicted the offense. To treat the Jews in Calgary like one would treat a Jew in Gaza.

ISIS may not be in Canada yet, but their mindset is very much alive there.

Let’s be very clear about what happened in Calgary that day; a small group of Jewish and non-Jewish activists got together to express their opinion on an issue, and were in no way interfering with the much larger “pro-Palestine” demonstration expressing an opposing view.

But Calgary amply demonstrated that one doesn’t have to wave the ISIS flag or pledge bai’a to its Caliphate to share the group’s vicious and extremist mentality. On that day, it wasn’t just a small group of Jews who were assaulted; it was the very core and definition of the values of Canadian society that were so blatantly and viciously violated.

It is those values that define societies, that differentiate a country that everyone aspires to live in, from the failing crap-holes that make up much of the Middle East and which people cannot flee fast enough. There is a reason why Europe and North America are the favored destinations for most Arab expats and asylum seekers.

The apathy of Calgary’s police was just as shocking as the assaults themselves. No arrests were made in the aftermath of the brutal violence. Indeed, one of the Jewish victims of the barbaric violence was admonished by a Calgary police officer, who told him “when you’re wearing that [the Israeli flag] what do you expect is going to happen here?”

And so it begins. The capitulation of every liberal society has always begun by justifying the actions of extremists. What did the young Calgarian expect to happen.

← Jewish Businesses In Paris Are Being Looted And Destroyed By Protesters Over Israel Gaza Offensive
People are Supporting Israel From All Over the World, and From Some Unlikely Places Too →