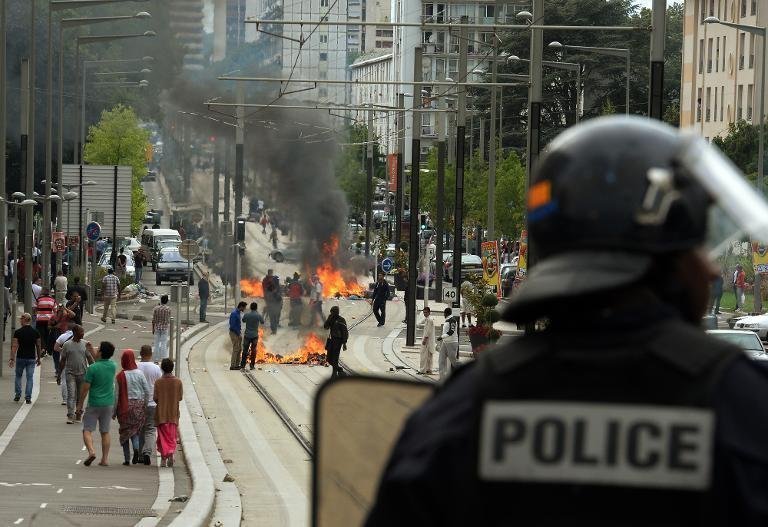 A French riot police officer looks at burning barricades along the tramway line in Sarcelles, a suburb north of Paris, on July 20, 2014.
(AFP Photo/Pierre Andrieu)

France’s interior minister Monday slammed “intolerable” acts of anti-Semitism after a rally against Israel’s Gaza offensive descended into violence pitting an angry pro-Palestinian crowd against local Jewish businesses.
Sunday’s demonstration in the north Paris suburb of Sarcelles was the third to deteriorate in a week, as shops were looted and riot police lobbed tear gas and rubber bullets at the crowd.

The rally had been banned amid concern the Jewish community would be targeted after protesters last weekend tried to storm two synagogues in Paris.

“When you head for the synagogue, when you burn a corner shop because it is Jewish-owned, you are committing an anti-Semitic act,” Bernard Cazeneuve told reporters outside the Sarcelles synagogue.

In the Paris suburb sometimes nicknamed “little Jerusalem” for its large community of Sephardic Jews, the rally descended into chaos when dozens of youth — some masked — set fire to bins and lit firecrackers and smoke bombs.

Eighteen people were arrested after looters wrecked shops, including a kosher foodstore and a funeral home as protesters shouted: “Fuck Israel!”. 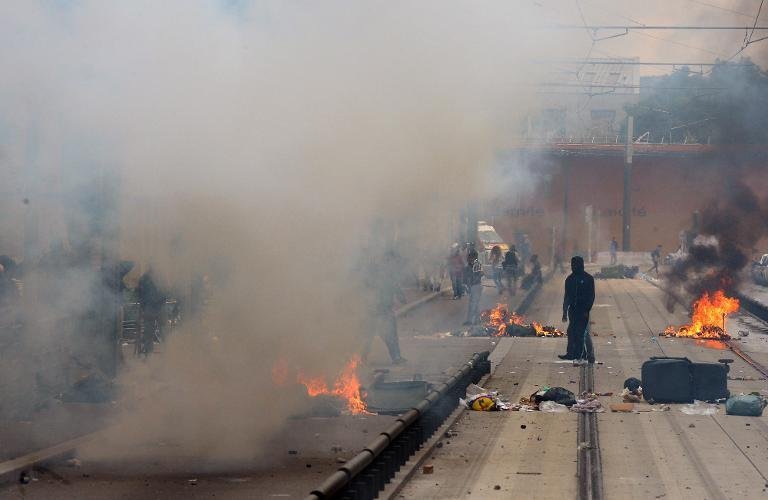 Youth stand among burning detritus along the tramway line in Sarcelles, a suburb north of Paris, on July 20, 2014. (AFP Photo/Pierre Andrieu)

“We have never seen such an outpouring of hatred and violence in Sarcelles,” said the mayor Francois Pupponi. “This morning people are stunned, and the Jewish community is afraid.”

The violence in Sarcelles mirrored that of another banned rally Saturday in Paris, where a protest spiraled out of control, leading to clashes with riot police and dozens of arrests.

The blistering Gaza offensive has deeply polarized opinion in a country that counts the largest Muslim population in western Europe and a huge Jewish community.

Cazeneuve said it was “intolerable for synagogues or stores to be targeted just because they are run by Jews.”

“Nothing can justify such violence.”

← In Canada: Statement by Ambassador Guillermo Rishchynski, Permanent Representative of Canada to the United Nations, to the Security Council Open Debate on the situation in The Middle East
ISIS May Not Have Reached Canada, but the ISIS Mentality Has →