Op-ed: The Israeli national mood is now a mixture of anguish at the toll of IDF dead, anger at aspects of the international response, and confidence in the troops and (atypically) the political leadership 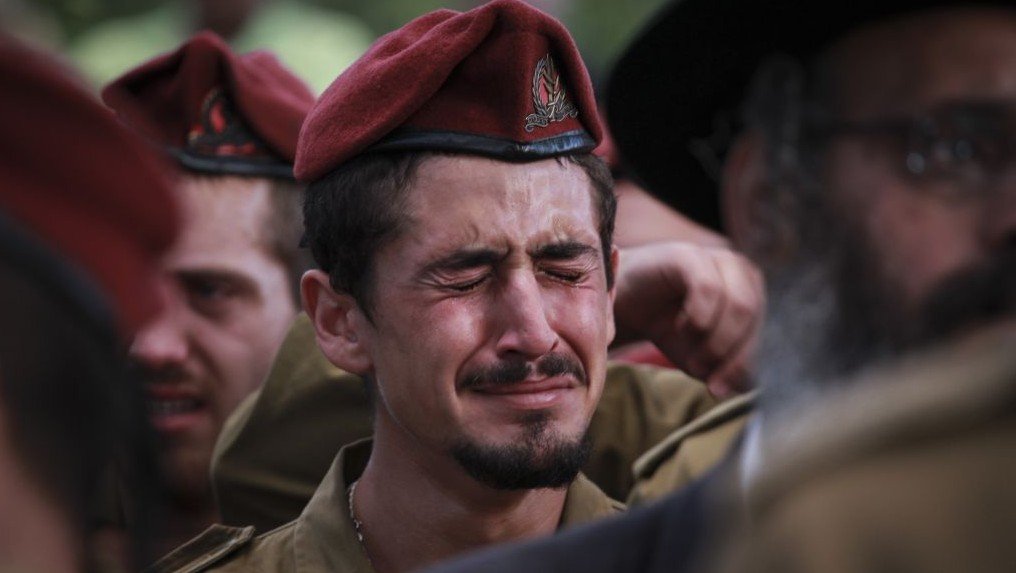 IDF soldiers mourning at the funeral of Sergeant Benaya Rubel, at the Holon Military Cemetery on July 20, 2014. The 20 year old paratrooper was killed by Hamas gunmen in Gaza on the second day of Operation Protective Edge. (Photo credit: Hadas Parush/Flash90)

Israel’s mood at the start of this war with Hamas was one of confident assurance. We wouldn’t be deterred by the rocket threat, and Hamas would be contained.

That’s utterly changed. The rockets turned out to be the least of our concerns. And the national mood now is a mixture of anguish at the growing toll of IDF dead, anger at the feckless response of parts of the international community — notably the US — and confidence in the troops and (atypically) the political leadership.

To lose the lives of 30 Israelis to terrorism is, appallingly, nothing new in a country that survived the suicide bombing onslaught of the second intifada. As the former Shin Bet intelligence chief Avi Dichter pointed out on Tuesday, 30 Israelis were killed in a single Hamas suicide bombing at the Park Hotel in Netanya on Passover Eve March 27, 2002. That was the worst, but still only one of dozens upon dozens of bombings that battered Israel’s buses, restaurants and shopping malls a decade ago.

But to lose 30 soldiers battling vicious Islamic extremists in Gaza produces anguish of a different nature. Our soldiers are our future. They’re the youngsters among us, who have been required because of Israel’s unique geographic and geostrategic peril to place themselves on the front line for years of service before their young lives have really begun. We feel guilty that we’ve pitched them into war. We, the safe civilians, draw our strength from the sky-high level of their determination and motivation to protect us. We wish it were us, the grownups, who were on the front line. We’d have much preferred for the rockets, targeting all of us, to have been the chief threat. 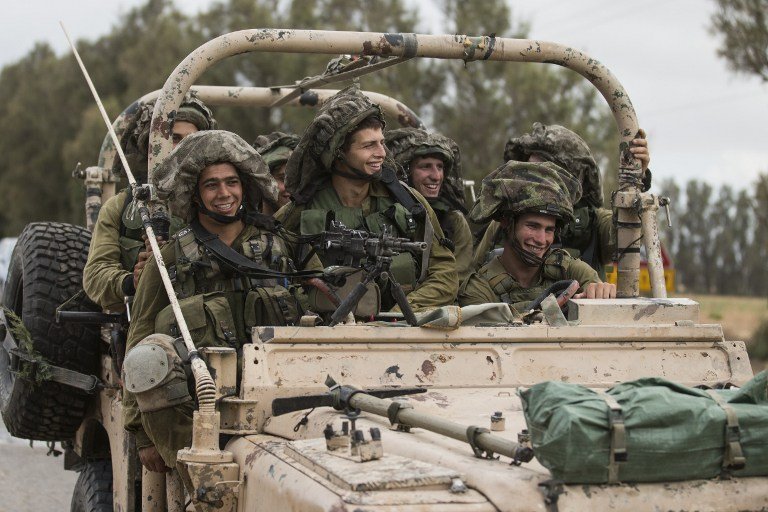 But coping with the rocket threat has proved relatively straightforward. Hamas anticipated that Tel Aviv would lie “in ruins” by now, Prime Minister Benjamin Netanyahu observed on Sunday. The accuracy of that assessment was underlined Tuesday when, atypically, the Iron Dome missile defense system failed, a rocket scored a direct hit in Yehud near the airport (sparking the end of most foreign airline flights to Israel), and the devastation was considerable. But for the most part, and without downplaying the trauma of being under constant attack, especially in the south, or the ongoing risk — the rockets are still being fired in their dozens — our Iron Dome shield has worked.

We feel guilty that we’ve pitched our young soldiers into war. We, the safe civilians, draw our strength from the sky-high level of their determination and motivation to protect us

The prime danger, the second half of the terror strategy that has required us to send our troops into Gaza, has turned out to be Hamas’s cross-border tunneling, the scale of which was not publicly known until the last few days. Labor Party leader Isaac Herzog spoke Tuesday of the “unimaginable” mega-terror attack Hamas is believed to have been planning — sending hundreds of terrorists swarming through those tunnels to massacre Israelis in the Gaza-envelope kibbutzim and moshavim. Netanyahu said Sunday that the intended Hamas attacks on kibbutz kindergartens, homes and dining halls would have been “catastrophic.”

Five times in recent days, trying to use those tunnels before the army finds them, well-armed terror gangs have made their way through — entering them from beneath homes in the Gaza neighborhoods a few hundred yards from the border, and emerging inside Israel. An estimated 20 Hamas gunmen have been killed in the subsequent confrontations; so have six IDF soldiers. Kibbutzim and moshavim close to Gaza have been placed on shutdown for long hours while the army made sure there were no more killers on the loose. Troop deployments on the Israeli side have been significantly bolstered.

But those are defensive measures. The real battle is taking place in those Gaza border neighborhoods — Shejaiya, Beit Lahiya, Beit Hanoun and others — where thousands of Israeli solders are searching, house to house, for the tunnel entrances. Dozens of openings have been found — multiple entrances to the underground passages that also have multiple exits on the Israeli side. Time after time, Hamas gunmen have sought to surprise the Israeli soldiers by rising out of the earth from these openings, and firing. They’ve been largely unsuccessful. Ten Hamas gunmen were shot dead attempting the feat from one tunnel opening inside a mosque on Sunday, military sources said — just one of numerous such incidents.

Israel says some 210 Hamas fighters have been killed; more than 20 have been captured and are providing intelligence on the tunnels.

But Israel is paying a heavy price. Soldiers have been killed in booby-trapped buildings. Six, maybe seven died when their armored personnel carrier was hit by an anti-tank missile in Shejaiya. They are fighting off kidnap attempts. They report being charged by Gaza children as young as 13 wearing suicide-bomber belts laden with explosives. The losses are mounting. “We’re in a war,” said Col. Uri Gordin, commander of the Nahal Brigade, on Tuesday. 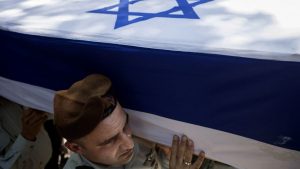 Israeli soldiers carry the coffin of Maj. Tzafrir Bar-Or, 32, one of 13 soldiers who were killed in several separate incidents in Shejaiya on Sunday, at the military cemetery in Holon, Monday, July 21, 2014. . (Photo credit: AP/Dan Balilty)

Hamas is using every dirty trick in the book. Everybody now knows what Israel has said for years — that Gaza’s terrorist government hides its rockets in schools, fires from next to mosques, buries its ammunition under homes, sets up its command and control centers in hospitals. We all now also know that when its rockets are found in schools run by UNRWA (the United Nations Relief and Works Agency), UNRWA gives them back to Hamas (and the US keeps on funding UNRWA).

Most despicably, Hamas warned civilians in Shejaiya not to heed Israeli pleas to leave the area — from where over 150 rockets have been fired, and numerous tunnels dug — ahead of the bitter fighting that has raged there since Saturday night; hence the awful scale of civilian casualties. The Hamas fighters, meanwhile, were lying in wait underground, preparing to ambush the Israeli ground forces.

Hamas is still resisting calls for a ceasefire. Why would it stop, when its popularity is high among Gaza residents for its “resistance” to hated Israel, and when it cares not a whit for the fate of those self-same Gazans? A hundred dead Israelis, even at the price of thousands of dead Gazans, would constitute victory in its eyes. Why stop, when it is being urged on by tens of thousands of demonstrators around the world — some suffering a surfeit of passion and a deficit of common sense, some consumed by hatred for Israel? 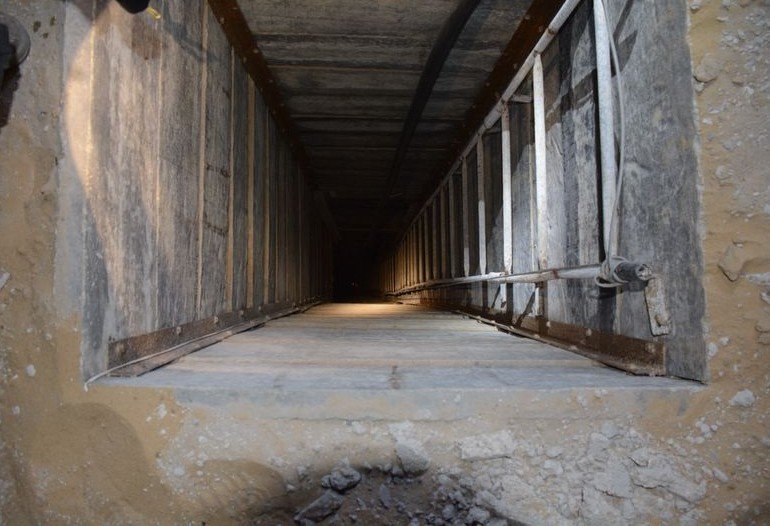 Most people here, however, feel that Israel cannot countenance a ceasefire either — unless it can be assured that Hamas would be unable to rearm, reorganize, rebuild those tunnels, research and develop rockets that can outwit Iron Dome, and dream up who knows what other strategies for killing us. And who can give us that assurance?

Israel certainly wants to put a stop to the loss of life — but the goal that Netanyahu set at the outset of this war, ensuring sustained quiet, can only be achieved through the long-term weakening of Hamas or its ouster. If there is no viable political solution, that means Israeli military action – bolstered by our fortunately burgeoning security partnership with Abdel-Fattah el-Sissi’s Egypt, preventing the influx of weaponry and materials into the Strip. (One fervently hopes there’s a great deal of Jerusalem-Cairo coordination going on right now.) Israel needs Gaza demilitarized, and the UN, US, EU et al are no more capable of ensuring that than the international community was capable of disarming Hezbollah in south Lebanon.

Israelis don’t doubt that the army can prevail in Gaza — to degrade Hamas’s capacity to harm us in the near term, maybe even the medium term. If the ground offensive proceeds for another week or two — the government and the generals say, and most Israelis believe — Hamas’s fighting force, its tunnels, its rocket capabilities will be devastated. At a terrible cost. And with nothing to prevent Hamas’s prompt revival.

Some in the international community appear to be internalizing that Israel is, as Netanyahu put it, fighting “for its home” against a terrorist government in the quasi-state next door that will go to any lengths to advance its strategic goal of destroying Israel — a goal that it shares with Hezbollah to the north, Iran to the east, and every other vicious Islamist terrorist group in the region. Extraordinarily on Tuesday night, the European Union foreign ministers issued a statement calling for the disarming of Hamas and Islamic Jihad and also decried Hamas’s “calls on the civilian population of Gaza to provide themselves as human shields.” 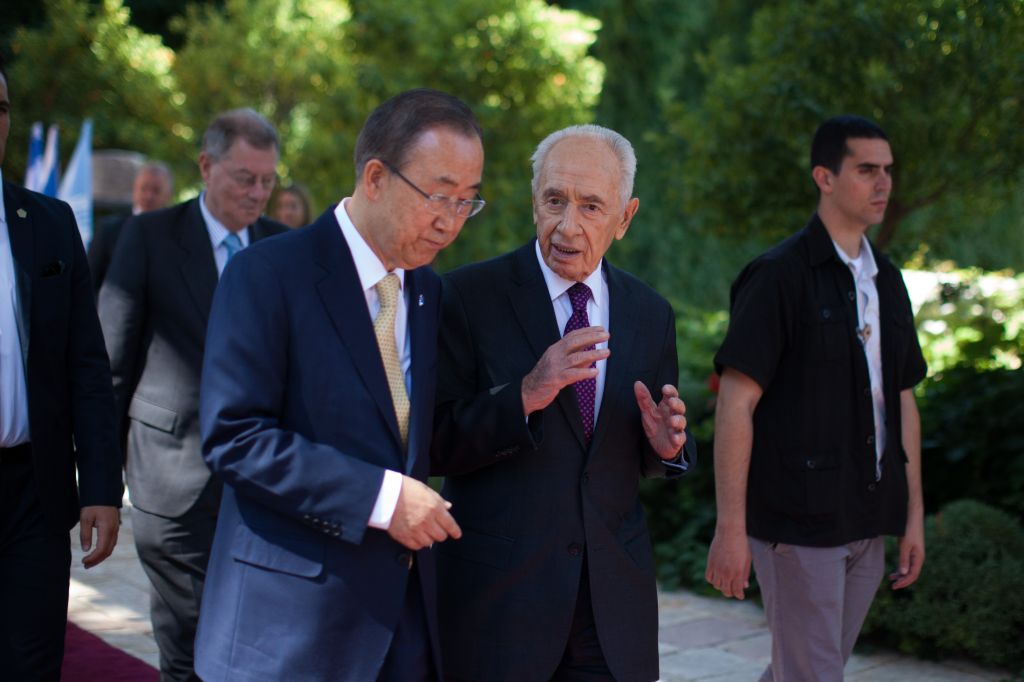 It’s a sad day when the EU — possibly shaken by the sight of all those militant Muslims leading the anti-Israel protests on its streets — appears to better understand what we’re up against than does the US government, which initially toyed with ceasefire ideas drafted by Qatar — the oil-rich emirate that funds much of Hamas’s weapons production, has promised to finance the reconstruction of Gaza from the devastation Hamas is bringing down upon the Strip, and which President Shimon Peres charged on Wednesday has been helping turn Gaza into “a center of death.” Qatar incites against the West via Al-Jazeera, and uses that satellite toxin to back the Muslim Brotherhood in its various iterations — in Egypt, where it helped bring Muhammad Morsi to power, and emphatically in Gaza, in the form of Hamas. Qatar backs Hamas’s demand to lift what the emirate on Wednesday termed the “suffocating siege” of Gaza — the Israeli-Egyptian security blockade that is the only defense Israel has against yet more murderous weaponry being employed against us. And the US calls Qatar a “valuable partner.”

It’s a sad day when, while the EU continues to regard Israel as safe for European citizens, the State Department issues a travel warning for US citizens against non-essential trips to Israel.

It’s a sad day, too, when the best that the administration can manage is to tell us we have “the right to self-defense,” rather than leading a global diplomatic offensive that champions Israel’s obligation to protect itself, and that musters any and every means to help its sole dependable Middle Eastern ally in that mission.

And it’s just a farcical day when we watch the US lead the abandonment of Israel by foreign airlines — a capitulation to terrorism that is simply not justified by the asserted security risk. This is the same United States leadership that is angry with us for failing to place our faith in high-tech security guarantees that, Secretary of State John Kerry swore blind, would assure our safety if we were to follow our withdrawal from Gaza with a similar full departure from the West Bank. Rather than simply cutting Israel off from American civilian flights, why have the US authorities not at least redirected flights to neighboring Jordan, where surely American security procedures could ensure the safe transfer of passengers on a short bus journey to Israel?