The IDF on Wednesday uncovered a new tunnel shaft in Gaza, leading to an underground passage that contained IDF uniforms, maps, and weapons.

Meanwhile, a Givati infantry unit fired on a terrorist cell that surfaced from a tunnel. One terrorist has been shot. 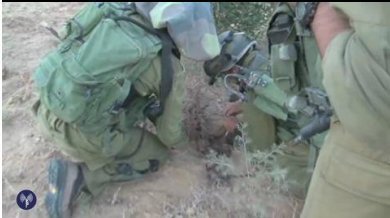 Elsewhere in Gaza, an Amored Corps force fired on two terror cells that were about to fire an anti-tank missile at the army. The cell was hit, the army said. Overnight between Wednesday and Thurday, a Golani infantry force came under anti-tank fire. Soldiers returned fire, and directed an air strike at the cell that fired the missile. The cell was hit.

Hamas has used positions in the Al-Wafa Hospital in Gaza to fire automatic weapons and anti-tank missiles on soldiers, and the IDF fired back in recent minutes, the army said Wednesday.

“The hospital was used for activating war rooms and command and control centers by Hamas and Palestinian Islamic Jihad,” the army said.

The IDF Coordinator of Government Activities in the Territories has issued repeated and direct warnings to the hospital’s manager, and to other Palestinians involved in running the hospital, the army said.

“Firing on our soldiers has grown in recent hours and endangered forces. As a result, the IDF has decided to strike terrorists operating in the hospital complex,” it added.

Meanwhile, the 401st Armored Brigade and units under its command have attacked over 150 targets since the start of the offensive against Hamas, and killed over 20 terrorists.

Units of the brigade destroyed a car bomb by firing an accurate tank shell, and uncovered many weapons used by the enemy, the army said.

Merkava 4 Tanks operating inside Gaza are protected by the Trophy anti-missile system, and as a result, are able to move deep inside enemy territory and destroy targets from a distance, while dealing with the threat of anti-tank missiles, and providing cover for infantry soldiers.

On Tuesday, the brigade’s commander, Col. Sa’ar Tzur, oversaw a brigade-wide operation involving tanks, infantry, and air support to seize areas in Gaza. Terrorists fired shells and RPGs at the army during the operation, which responded with a large wave of return fire from tanks and infantry soldiers.

A terrorist cell was also found approaching the forces, and was destroyed from the air.

← A Picture Of The IDF That The World Will NEVER EVER Show You
Shas Leader: Israel Doesn’t Need Army Since Ultra-Orthodox Prayers Protect It →