I don’t know if I’m about to offend some people, or if some might think differently about me after this. I don’t care. I feel that this message needs to be spread, and take from it what you will.

I received the following message from three people today:

“Fwd:FWD: FWD: URGENT! Please share with as much people as possible. The Rav hamekoubal Nissim Shalom declared that his grandfather ZT”L appeared to him in a dream and revealed to him that the Machiach is at his door, and ordered him to let as many jewish people as possible know about it as well as many people as possible. The Rav insisted upon the fact that whoever will send this message will be saved from the suffering which are supposed to occur with the coming of Machiach. The Rav asked to send this message to at least 12 people, a number corresponding to the number of the tribes of Israel. It is a very favorable moment now in heaven , and to those who might be skeptical and not believe in the words of the Rav should know that the Rav would never make such a declaration without serious reasons to do so because it is forbidden to give false hopes to the Jewish people. From the Rav Yoel Benharoushe. Thank you to forward to all your contacts.”

First of all, I just shared this blog post with 12 Facebook Groups/Twitter feeds. Does that count as more people got to see it? 🙂

Visiting Facebook, I saw the below picture which made me laugh. 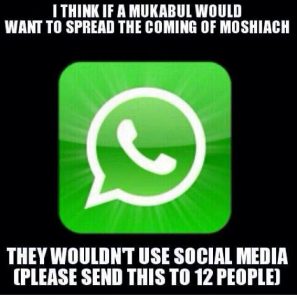 This falls under Step 2 of my 7 steps on how anyone can be a Mekubal.

Whether this is real or not, I get it: try to notify as many people as possible. I think that in that respect it’s working!

Now on a more serious note: The Lubavitcher Rebbe ZT”L (I’m not Lubavitch, in case anyone asks – I just love the quote I’m about to paraphrase) said when he was alive that the generation of Moshiach is here as everything is in place – we just need to deserve him. I also heard (somewhere) that in each generation there is a Moshiach that is ready to redeem us as long as we are deserving.

There is also the notion (heretical?) that Moshiach is always coming and therefore there will never be a time when he has arrived, that every Moshiach that does come is false and every one before was false. See the following clip by former intellectual Yeshayahu Leibowitz Z”L:

Reb Leibowitz was someone that was always Frum even though his views were deemed controversial and open-minded. Personally I identify with him more than a lot of others as he was all about getting closer to Gd and doing Torah and Mitzvot should be Lishmah (for its own sake).

On the above video, it’s one that I had on me for a while and can now finally put to good use 🙂