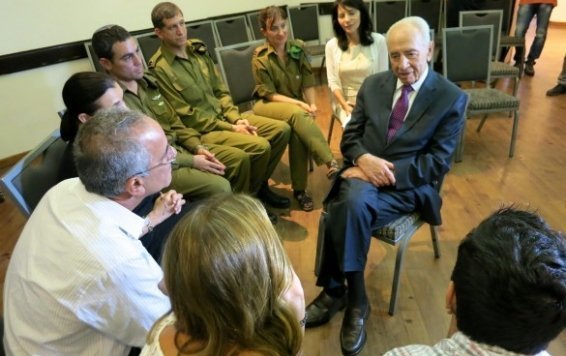 “Thank you for bringing up such a child,” Israeli President Shimon Peres told the Steinbergs at their mourning shiva.

by Simone Wilson
2 days ago

The mother, father, sister and brother of 24-year-old Woodland Hills native and fallen IDF soldier Max Steinberg, though heartbroken and jet-lagged, said they were warmed by the incredible turnout at his funeral on Mt. Herzl today.

“I probably couldn’t stand here and talk without breaking down, without… all this love and all these people,” Steinberg’s mom, Evie, said into a semicircle of news mics after the Jerusalem ceremony. “It’s so overwhelming and so incredible.”

Israeli media estimates put funeral attendance between 20,000 and 35,000 people. It was hard to tell for sure: Heads in army caps andkippas stretched as far as anyone could see, back up into the hills of the cemetery. It was at this very site, on a Birthright trip in 2012, that Steinberg noticed the grave of American lone soldier Michael Levin and began considering a career in the IDF. 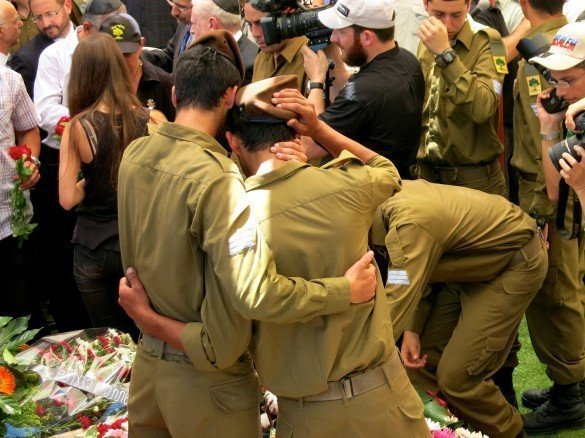 Steinberg was one of seven members of the IDF’s elite Golani brigade killed last weekend when their tank ran over an explosive that had been planted in the streets of Shujaya, in east Gaza City. It was July 20, the third night of Israel’s current ground operation to wipe out terrorist infrastructure in the Gaza strip, and the deadliest night of the conflict for both sides: About 60 Palestinians and 13 Israeli soldiers were killed.

This morning, around 11:30 a.m., Steinberg’s coffin was silently lowered into the ground at Mt. Herzl and covered in soil by his fellow Golani soldiers. Each of Steinberg’s family members then said their final words to him, fighting back tears.

“As I look around right now, I am in awe,” said his sister Paige, 20. “I never thought I’d be here with so many people who understand how brave you are.”

There were many soldiers in the crowd, most wiping tears from their cheeks, who knew Steinberg from army training and service. “He was a fighter that never stopped giving… an energizer bunny,” said Eric Weiss, a 21-year-old lone soldier from Maryland.

Nissan Moshaev, 19, an Israeli soldier in Golani (pictured below, left), said only: “He’s the man.” 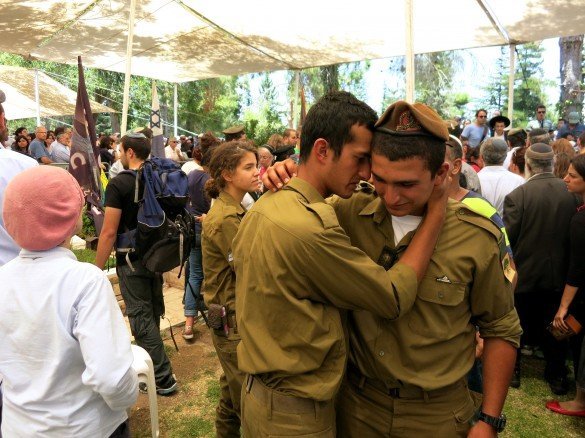 Steinberg’s younger brother and sister, Jake and Paige, both mentioned how much he had loved Bob Marley while speaking at the funeral. “Live for yourself, and you will live in vain. Live for others, and you will live again,” Jake said, quoting his brother’s hero. An Israeli friend who spoke, too, ended his speech with: “Max, you are a lion of Zion.”

At the end of the ceremony, dozens of organizations brought up wreaths wrapped in flowers and messages to lay on Steinberg’s grave.

Even those in the crowd who had never met Steinberg told the Journal afterward that they felt like they had. “The lone soldiers are the least lonely,” said Jerusalem resident Avital Schenkollewski, 24, who had come with a friend. “We want to be so close to them. [Steinberg] gave everything for us, so it’s the least we can do to be here.” 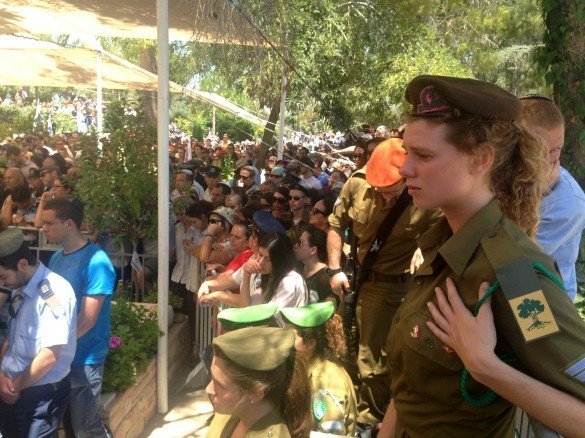 First, U.S. Secretary of State John Kerry (pictured below), currently on a Middle East tour to encourage a cease fire between Gaza and Israel, stopped by the hotel shiva to pay his respects to the Steinberg family. He immediately expressed his awe at the lengths their eldest son had gone to for Israel: “It’s just a huge statement about a young guy finding a place that he was so passionate about, and giving his all, putting himself on the line,” he said. “It’s an amazing story.”

Kerry entered and exited the room swiftly, surrounded by men in black and refusing to take any questions from press. But he spent a significant chunk of time — considering his tight and urgent schedule — chatting with Evie and Stuart about their son, and with Paige and Jake about their relationship with their brother and their own plans in life. 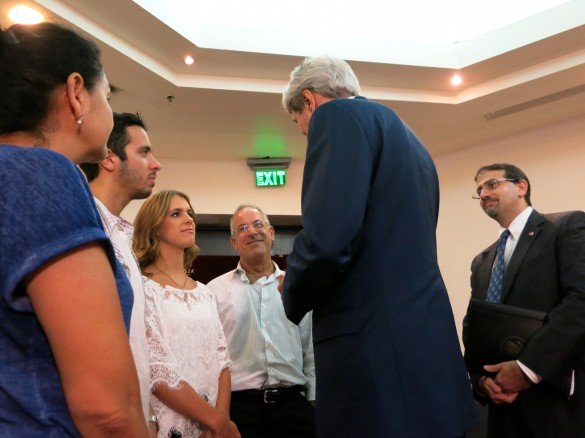 “I am so honored to be here. I am in awe of your son, truly,” Kerry told the family. “And I think you know, I served in the military, and I have great respect for anybody who… especially puts themself willingly in harm’s way. And as an American, we’re so proud of the affection that he felt, just the love he felt, and the roots he found in this country.”

U.S. ambassador to Israel Shapiro (pictured above, right), who spoke at the funeral and accompanied Kerry to the Crowne Plaza Hotel, took that sentiment a step further. “There’s no greater manifestation of the bond between our countries than an American citizen putting himself in harm’s way to defend Israel,” he said at the shiva.

The family also told Kerry how stubborn Steinberg had been from the start about joining the Golani brigade, despite his initial rejection based on insufficient Hebrew skills. (At the funeral, Stuart remembered his son saying: “If it’s not Golani, it’s jail or it’s home.”)

“He was in the Golani unit?” Kerry asked. “Tough guy. Did you know he had that in him?” 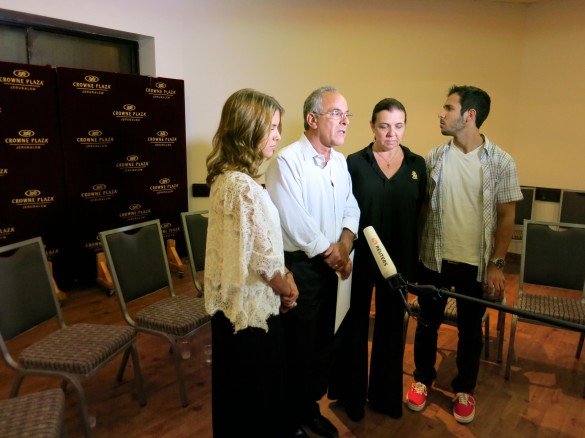 Israeli President Shimon Peres, with only two days left in his term, likewise visited the shiva and spoke at length, so softly he was almost whispering, about Steinberg’s “depth, seriousness, devotion and courage,” as well as the history of Middle East conflict, in particular Israeli relations with Gaza.

“I come to thank you for raising a boy like him,” he said.

Later in the conversation, Peres told Steinberg’s family: “His brigade saved the lives of others, maybe thousands of people. … We found tunnels that lead straight under the border to the kibbutzim, the most peace-loving people that we have.”