Rivers was at LAX Thursday afternoon when our photog mentioned Israel and Palestine … and that’s all she wrote.

You gotta see it. It comes from the heart and the gut. 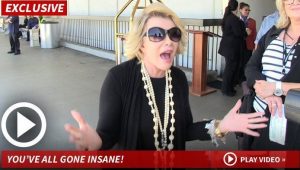 ← Israel’s War with Gaza: Double Standard and Cruelty
Hamas In Underwear After Israel Kicks Their Asses →