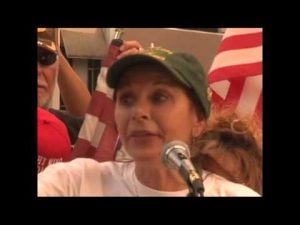 Joyce Kaufman has a Jewish father and Puerto Rican mother. Her Puerto Ricanness is brilliantly put on display.

** Note: before we came in, Canaanites lived there. Avraham moved when God told him “Lech Lecha.” -RH **

2. Its historic right. History supports it totally and completely. Not negotiable. That land belonged to Israel from the time before the Roman Empire. Jews still lived under Roman Rule. Also, 700 years ago the Turks took over and ruled until World War 1, when the land was conquered by the founding fathers of the United States, the British. The British were very grateful to a Jewish chemist names Weizmann, who found a way to manufacture nitroglycerin from materials that existed in England and to the Jewish people that bankrolled all of that research and so they promised to give the Jews back their homeland. And that’s exactly how it went down. It’s supported by historical evidence. Here’s a quote by Mark Twain on his tour of Palestine in 1867,

“A desolate country whose soil is rich enough, but is given over wholly to weeds… a silent mournful expanse…. a desolation…. we never saw a human being on the whole route…. hardly a tree or shrub anywhere. Even the olive tree and the cactus, those fast friends of a worthless soil, had almost deserted the country.”
(The Innocents Abroad, p. 361-362)”

Where was this great Palestinian nation? It didn’t exist. Palestine was named by the Romans. Transportation was by camel. There were no orange groves, no vineyards to be seen. Go look at that place today. It’s a garden in the middle of a desert. God made it flourish and bloom when it was given back to the people. So history supports it.

3. The practical value of the Israelis living there today. Israel today is a modern marvel of agriculture. There’s no place else on Earth where a desert turned into a orchard. If the Arab nations were smart they would go to the Israelis and ask them, “what do we do with our deserts?” because they didn’t do squat.

4. The grounds of humanitarian concerns. I want you to listen to me because this may be the most important thing you hear today. Six million Jews were slaughtered in the last century. People who could have been aunts and uncles, mothers and fathers of the people here today, because the Jews had no place to go. So if you want a homeland for people that were historically hit by Pogroms and the Holocaust, you make sure Israel stays intact. That’s what the humanitarians all talk about. Let’s keep a homeland for the Jews, we wee what happens when there is none.

6. It’s a roadblock to terrorism. She went to Israel on a six-day tour and saw how terror is combated in Israel. Were it not for the things they designed, the protocols they formulated, we would have even more problems here that you see today. Israel has cutting-edge technology. The only problem with America today is that we have an administration that doesn’t want to use it. The administration feels that if they go against the foe of the great Satan, America, they will looks the favor of the Worlds’ opinion. Guess what? They hate us anyway. Not interested in courting public opinion or what people have to say about the United States. No apologies for the United States of America or Israel anymore. With Katyusha rockets being fired, does the world care that kids run into bomb shelters every 20 minutes? No! They never care what happens to the Jews, so she’ll be darned if she cares what they think about her.

7. Most important reason: God said so. Not ashamed to say it. Genesis 13, 14-17: God said to Abraham, “lift up now with your eyes and look where you are northward, and southward, and eastward and westward for all the land which you see to you I will give it and to your seed forever. Arise, walk through the length of the land and the breadth of it for I will give it to thee.” That’s God talking. And if God says it, that settles it!