Update: US and Israeli officials have rushed to dismiss the recording as a”fabrication”.

Update: PM Binyamin Netanyahu on his Twitter channel announced that it was fake and condemned those low enough to spread the rumor. I personally agree, and told everyone that asked, that this was Arutz Sheva (Channel 7 News in Israel), not the Onion. Now I don’t know what’s credible anymore. ~RH

US president markedly unfriendly, interrupted prime minister as he attempted to push unfavorable truce on Israel. 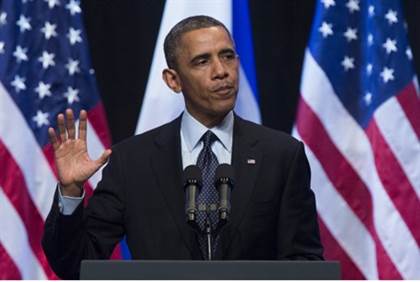 Damning evidence has emerged of US President Barack Obama’s dismissal of Israel’s position in favor of supporting the position of Hamas and its allies during ceasefire talks.

A “senior US official” leaked an audio recording of a telephone conversation between Obama and Prime Minister Binyamin Netanyahu to Channel One. In it the 35-minute conversation, which took place on Sunday, the US President appears downright hostile at points, and even cuts off Netanyahu in the middle of his protestations over a one-sided truce proposal which would have seen Hamas receive all its key demands, but that Israel ultimately rejected.

The following is an excerpt of the conversation, published in Hebrew by Channel One:

Obama: I demand that Israel agrees to an immediate, unilateral ceasefire and halt all offensive activities – particularly airstrikes.

Netanyahu: What will Israel receive in return for a ceasefire?

Obama: I believe that Hamas will stop firing rockets – silence will be met with silence.

Netanyahu: Hamas violated all five previous ceasefires, it is a terrorist organization which is dedicated to the destruction of Israel.

Obama: I repeat and expect Israel to unilaterally stop all its military activity. The pictures of destruction from Gaza distance the world from Israel’s position.

Obama: Within a week of the end of Israel’s military activities, Qatar and Turkey will begin negotiations with Hamas on the basis of the 2012 understanding [following the end of Operation Pillar of Defense – ed.], including Israel’s commitment to removing the siege and restrictions on Gaza,

Netanyahu: Qatar and Turkey are the biggest supporters of Hamas. It is impossible to rely on them to be fair mediators.

Obama: I trust Qatar and Turkey, and Israel is in no position to choose its mediators.

Netanyahu: I object, because Hamas is able to continue and to fire rockets and to use tunnels for terror attacks…

Obama – interrupts Netanyahu mid-sentence: The ball is in Israel’s court – it is obligated to end all military activities.

The Channel One journalist who received the tape emphasized that at other points during the conversation there were more “positive” word exchanged between the two, such as Obama repeating America’s commitment to Israel’s security.

But those words will ring hollow to Israelis, considering that the proposal put together by John Kerry, Qatar and Turkey did not address a single one of Israel’s demands and – as alluded to by Obama himself – relied on little more than the goodwill of Hamas to stop firing rockets. This, despite the group (which the US itself lists as a terrorist organization) being unabashedly committed to the destruction of the State of Israel and the genocide of all Israeli Jews.

For his part, earlier on Tuesday John Kerry claimed that Prime Minister Netanyahu had in fact approached him to ask him to help hammer out a ceasefire deal, after previous truce proposals were rejected by Hamas.

If that was indeed the case what resulted could hardly have been what Netanyahu had in mind: a joint initiative with two states overtly hostile towards Israel, concluding in a draft proposal which would have granted Hamas all of its key conditions – including the opening of air and sea ports and the total lifting on Israel’s security blockade – but which addressed Israel’s “security concerns” in only the vaguest possible terms.

Update: US and Israeli officials have rushed to dismiss the recording as a”fabrication”.

Update: PM Binyamin Netanyahu on his Twitter channel announced that it was fake and condemned those low enough to spread the rumor. I personally agree, and told everyone that asked, that this was Arutz Sheva (Channel 7 News in Israel), not the Onion. Now I don’t know what’s credible anymore. ~RH 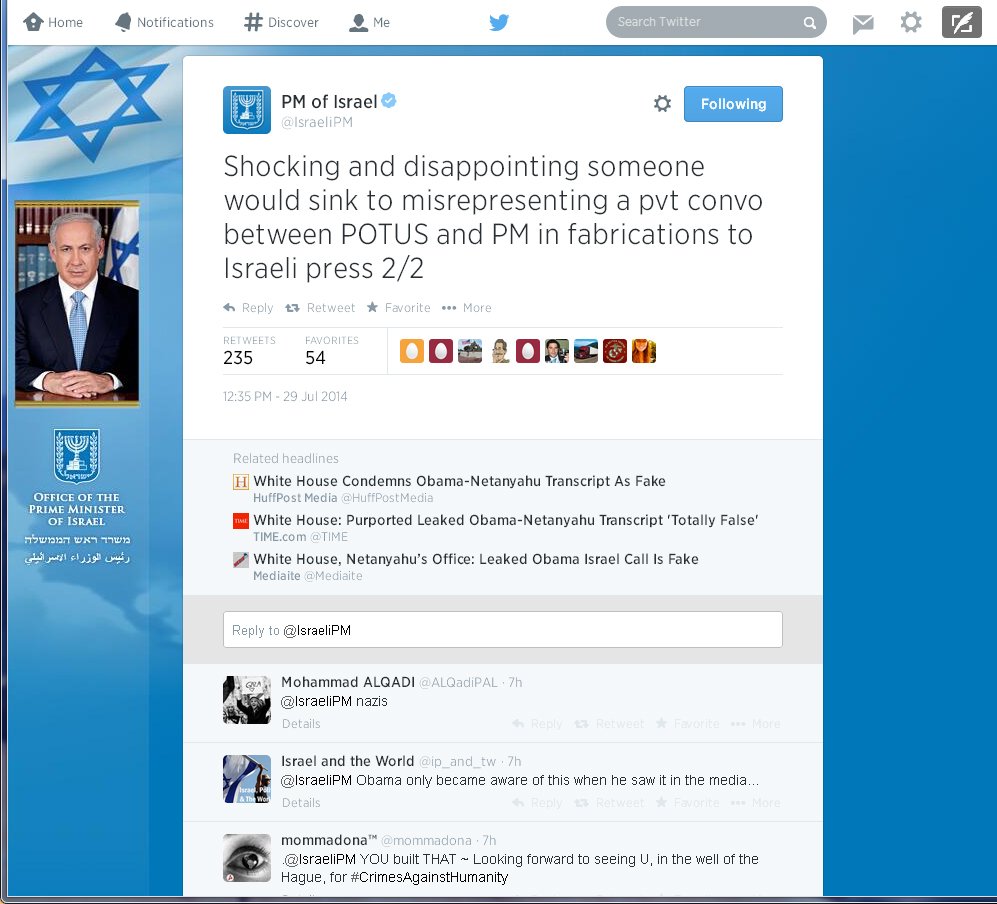