Maverick Likud MK spells out his solution for the Gaza terror problem.

MK Moshe Feiglin (Likud) spelled out his formula for solving the Gaza terror problem, in an event at Beit Shemesh Wednesday.

Feiglin does not believe in going after rocket launchers or tunnels. Gaza should be retaken in whole, he said, by directly attacking the Hamas leadership and striving for victory, and doing so according to Jewish law, without sacrificing soldiers in order to save members of the local population, which voted Hamas into power.

Once this is accomplished, the terrorists who fight Israel must be destroyed, he said, and the remaining population should be encouraged to leave through monetary compensation. Surveys show that 80% of Gazans would like to leave the Mediterranean coastal strip and move elsewhere in the world. The minority that decides to stay will be allowed to stay and gradually receive a status similar to the Arabs of eastern Jerusalem.

MK Feiglin was recently appointed to be a member of the Knesset’s Foreign Affairs and Security Committee. 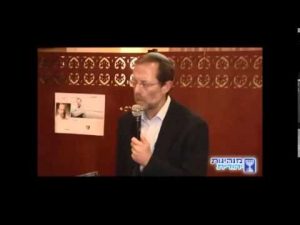