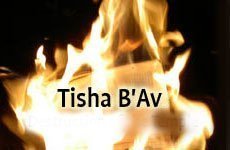 What Happened on the Ninth of Av?

Other grave misfortunes throughout Jewish history occurred on the Ninth of Av, including:

Aspects of Mourning: The Afternoon Before Tisha B’Av

During the afternoon prior to Tisha B’Av, it is customary to eat a full meal in preparation for the fast.

At the end of the afternoon, we eat the Seudah Hamaf-seket – a meal consisting only of bread, water, and a hard-boiled egg.

The egg has two symbols: The round shape reminds us of a sign of the cycle of life. Also, the egg is the only food which gets harder the more it is cooked – a symbol of the Jewish people’s ability to withstand persecution.

Food eaten at the Seudah Hamaf-seket is dipped in ashes, symbolic of mourning. The meal should preferably be eaten alone, while seated on the ground in mourner’s fashion.

When the afternoon prior to Tisha B’Av occurs on Shabbat, there is no Seudah Hamaf-seket with eggs and ashes. Rather, the regular Shabbat “third meal” is eaten, albeit without guests and fanfare.

Upon sundown, the laws of Tisha B’Av commence – consisting of the following expressions of mourning:

1. No eating or drinking until nightfall the following evening.

3. Other mourning practices include:

4. Following Tisha B’Av, all normal activities may be resumed, except for the following which are delayed until midday of the 10th of Av, because the burning of the Temple continued through the 10th of Av:

Get Aish.com’s Free Email Updates and Be Inspired.

When Tisha B’Av Falls on Shabbat

For a full treatment of this topic, see: When Tisha B’Av falls on Shabbat or Sunday. Here is a brief overview of the special conditions that apply:

with thanks to Rabbi Moshe Lazerus

← During Israel’s Unilateral Cease-fire, Dozens of Rockets Fired from Gaza
On So Many “Human Rights Activists” →