An outing in Ashkelon on the first night of quiet, with a bar tab picked up by an American-Israeli who won’t let terror win 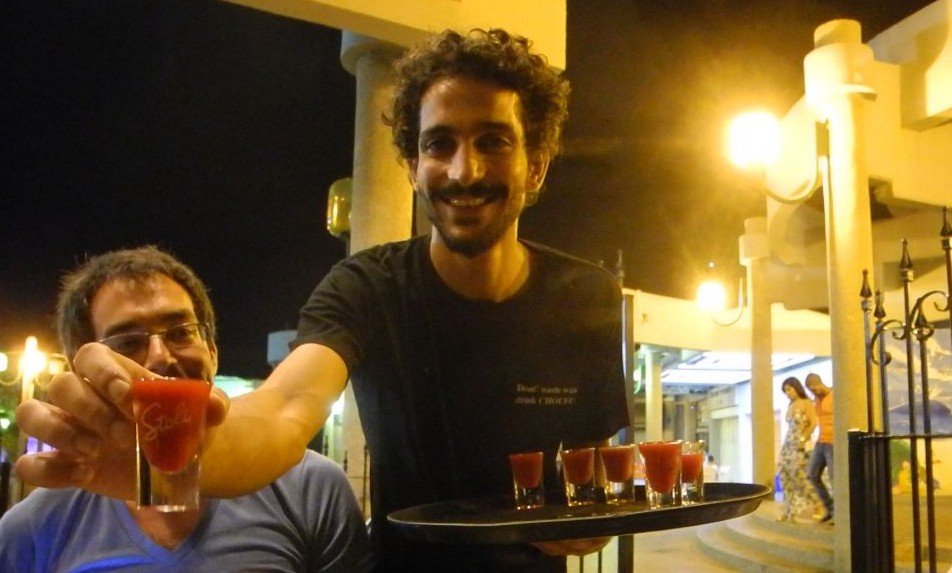 Ido Ozeri, one of the owners of Archies bar and restaurant in Ashkelon, passes out shots courtesy of a bar tab from American-Israeli Yigal Rechtman on Tuesday, the first night of the ceasefire. (photo credit: Melanie Lidman/Times of Israel)

ASHKELON, southern Israel — At 7:37 p.m. on Tuesday evening, the sun slipped below the horizon at Delilah Beach in Ashkelon, orange and purple hues reflected in the clouds above a calm sea. My “Red Alert” cell phone app hadn’t moved since 7:59 a.m., and the 72-hour ceasefire had held almost 12 hours.

As the evening turned to darkness on the first quiet day in nearly six weeks, it felt like the entire city of Ashkelon let out a big sigh of relief.

Archie’s, a restaurant and pub with a seaside view next to Delilah Beach, opened on May 25 of this year, just a few weeks before the three Israeli teenagers were kidnapped.

“We had an amazing beginning of the summer; we heard all the different languages of tourists: Finnish and German and French and Russian and English and Hebrew. It was just the start of the tourism season and we couldn’t believe how big tourism was here in Ashkelon,” said Ido Ozeri, 27, one of the bar owners.

“It seemed like a promising summer. But all of this changed in just one day. It became like Sodom and Gomorrah here with all the sirens and rockets. We went from a pastoral quiet sea view to literally terrorists coming out of the water.” 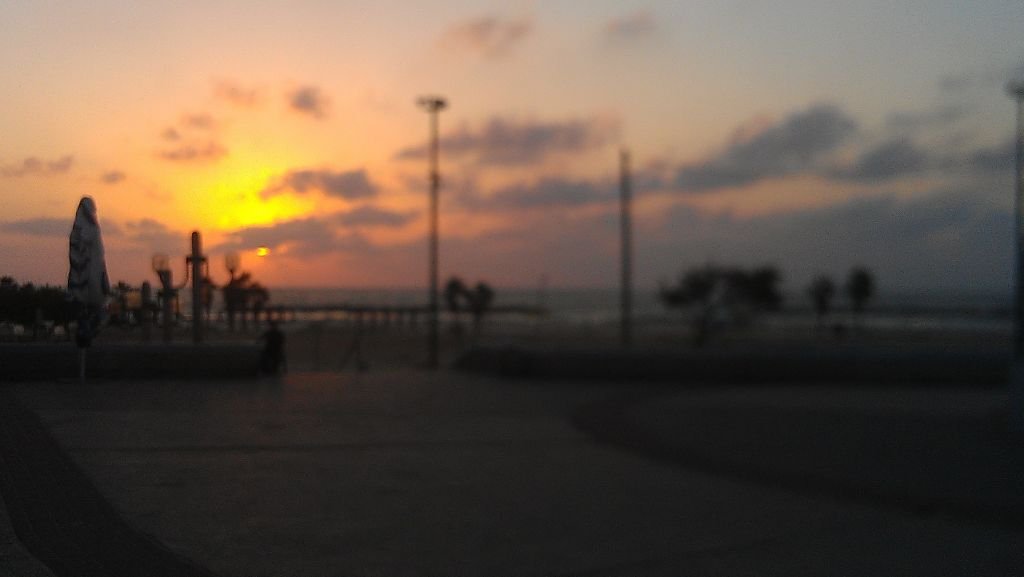 The sun sets over Delilah Beach in Ashkelon on Tuesday. (photo credit: Melanie Lidman/Times of Israel)

At the beginning of Operation Protective Edge, as five Hamas commandos tried to storm the beach near Kibbutz Zikim, 10 kilometers south, Ozeri was working a shift when a group of policemen ran toward the bar from the direction of the beach. “You have to close immediately,” the policemen said. They shut down all the bars and restaurants on the beach for the night.

Archie’s stayed open for most of the operation, but had barely any customers. Ozeri said he has no idea how to calculate the loss since the bar doesn’t have a previous season to compare to, which could hinder the process of getting compensation from the government. “The long-term damage could reach millions of shekels,” he said. “And the worst part is [war] could break out again at any moment.”

Israeli journalist Noga Tarnopolsky, who writes for the Global Post, visited Archie’s in the beginning of the operation and wrote a story about the bar and other businesses in Ashkelon struggling to survive during a summer of constant rockets.
One of her readers, an Israeli-American working in New York, read the story and was inspired to throw a party at Archie’s for Ashkelon residents, to express solidarity with the residents from the south and help a struggling business.

Yigal Rechtman is a forensic accountant originally from Kibbutz Tzora near Beit Shemesh. He recalled visiting Israel from the United States in the summer of 2001, at the height of the Second Intifada, and being cooped up with his children in his parents’ home because they felt like they couldn’t go out to restaurants or cafes. He returned with his family to New York on September 10, 2001, just a day before the World Trade Center attack. After 9/11, New Yorkers also launched campaigns to help out downtown restaurants and bars, which were struggling to attract customers in the aftermath of the terror attacks and amid concerns about air quality in downtown Manhattan.

“If you stay holed up in your house, in some respect, they have won whether or not they hit you with a rocket, because you’re a prisoner in your own house,” Rechtman said on Tuesday. 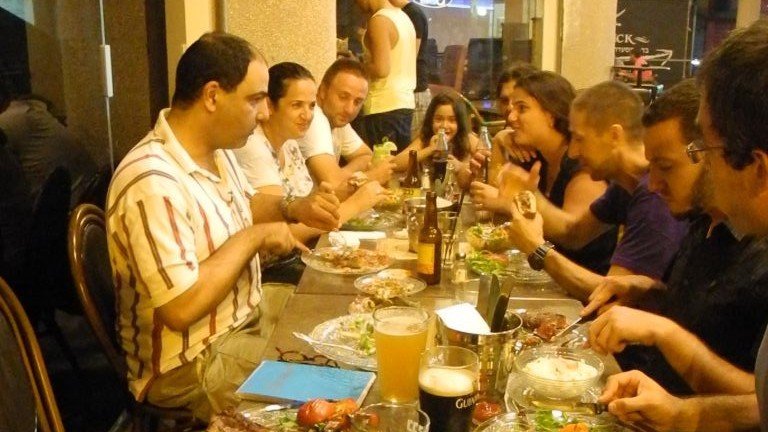 Yigal Rechtman, left, and a full table at Archies bar and restaurant in Ashkelon on Tuesday night. (photo credit: Melanie Lidman/Times of Israel)

So Tarnopolsky put Rechtman in touch with Ozeri. Rechtman called and said he wanted to pay for a party for Archie’s customers. Ozeri thought it was a joke.

“I thought, let’s find a way to give people an incentive [to get out of the house],” said Rechtman. “There’s a military battle with its own risks and tactics, and there’s a civilian war – not a civil war – where civilians want to help. This is really sending a message, it’s a big f- you to the terrorists.”

Rechtman donated $1,000 for an open bar tab for the night. The party was called for Tuesday evening regardless of the political situation, to give Ashkelon residents some free beers despite the rockets and help Archie’s attract customers.

But when the ceasefire came into effect, and stayed relevant for 12 hours, the party took on an altogether different vibe, one of celebration, gratitude, even liberation from fear and worry. Ozeri publicized Rechtman’s open bar tab on the Archie’s Facebook page, but most people came because it was time to loosen up after six weeks of functioning in emergency mode.

Customers poured into the bar starting around 9 p.m. – teenage girls barely over 18 wearing short shorts, soldiers still in uniform with dust on their boots, families, older couples, everyone sitting outside for the first time without glancing around to ascertain the closest protected space in case of a Red Alert siren. A puppy that the bar had adopted during the operation ran between peoples’ feet, begging for scraps. The bartenders argued whether his name was “Tzuk” or “Eitan,” since “Tzuk Eitan” is the Hebrew name of Operation Protective Edge.

Ozeri wove between the tables filled with customers, laughing and talking, offering trays of free shots: whiskey and arak and a special from the bar made with fresh strawberries and vodka. Beers, at least for the first hour, were on the house.

It was a welcome change. After six weeks of feeling like my entire body was tense and coiled, waiting for the next tragedy, jumping every time the cellphone rang, hunched over the computer obsessively checking the news or social media, Tuesday night was the first time I sat out under the stars on a perfect Israeli summer night and let everything go – the stress, the heartbreak, the uncertainty.

Who knows what the ceasefire will bring, or if the quiet will last beyond this night. For now, the alcohol was flowing, people were finally relaxing, and the bar was as full as Ozeri hoped it would be when he opened 10 weeks ago, which feels like a lifetime.

“I’m a big beer fan,” Rechtman said, as he raised a glass of Negev Pale Ale. “Archie’s is a vehicle to send a message: We’re alive, we’re well, and we’re going to have another beer.”

← Massive miracle out of Israel, this is just incredible you have never seen anything like this
Here is the Hamas Victory in a Nutshell →