‘Yated Neeman’ editorial speaks out fiercely against sense of closeness, solidarity felt by large sections of haredi society toward IDF during Gaza operation. 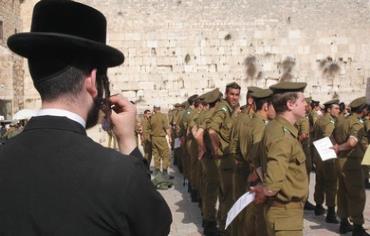 During the four weeks of Operation Protective Edge, the haredi community’s attitude toward the IDF softened considerably, with many expressing their support for the soldiers in Gaza. But on Thursday, an editorial in the largest-selling haredi daily newspaper, Yated Ne’eman, spoke out fiercely against that sense of closeness and solidarity with the army.

There were numerous supportive initiatives from the haredi world during the conflict: Yeshiva students would “adopt” soldiers to pray for by name, the haredi leadership called to recite prayers in synagogues for the well-being of the Jewish people, and several initiatives provided food and provisions for soldiers.

Some married yeshiva students even (anonymously) declared the war a Torah-mandated conflict and said they were seeking to enlist in the IDF, calling on others to do so as well.

However, the Thursday editorial said that while the solidarity during the war was fitting and appropriate, this should not have any impact on how the haredi community related to the IDF and secular society in the long term.

“This must ring a spiritual ‘red-alert’ warning,” the paper warned.

“This confusion must not penetrate inward,” it continued, and spoke out against what it described as attempts to recruit haredi boys into the army during the operation.

“The unceasing efforts to change us became even greater during the war. The attempt to cynically exploit the emergency situation by digging spiritual terror tunnels must be rejected and expelled,” the editorial stated. It cited the haredi conscription law that passed in March as evidence of attempts to change haredi society.

“At this time when they are trying to coerce us, we must seal every crack and strengthen the weak who are more likely to be tempted,” the article read. “We must raise the walls…. Contact and connection between the haredi camp and the secular is treif [non-kosher], especially at a time like this.”

Shahar Ilan, the deputy director of the Hiddush religious freedom lobby group, said that the article was a reaction by the haredi leadership to sentiment within the community that it felt had gotten out of hand.

He said there was a clear change in the way the haredi community had reacted to Operation Protective Edge compared to previous conflicts, and he ascribed these changes largely to the increasingly pervasive presence of the Internet in the community and ready access to it via smartphones and other devices that, despite great opposition, many haredim use.

“The haredim built huge fences to prevent the population from knowing what happens outside of it, and now the Internet allows every haredi person to know exactly what is happening,” Ilan said. “You cannot now prevent an 18- or 19-yearold haredi boy from knowing that secular or national-religious boys of his age are risking their lives for the country.”

Ilan also expressed optimism that the haredi experience during the war would lead to an increase in haredi enlistment.

Yisroel Cohen, a journalist with the Kikar Hashabbat haredi news website, said there was no doubt that the community had reacted differently to Operation Protective Edge than to previous conflicts. He cited the publication of pictures and biographies of fallen soldiers in the haredi online news media, and the unprecedented decision to delay the end of the yeshiva semester so that the students could continue praying and studying as a merit for the soldiers.

“It’s possible now that the leadership feels that a balance must be brought about, though,” Cohen said regarding the Yated editorial. “The rabbis perhaps feel that too much of a connection has been made, and that needs to be rebalanced out with this kind of message.”

Cohen also noted the impact of a series of articles in a rival haredi daily, Hapeles, which warned that the real enemy are those who wish to harm the spiritual well-being of the Jewish people, meaning secular Israeli society and those who seek to draft haredi yeshiva students into the army.

Hapeles is the mouthpiece of the hardline Bnei Torah political movement which has in recent years competed with Degel for influence and control over the non-hassidic haredi world. Cohen said that the uncompromising attitude of the newspaper and the Bnei Torah movement even during the war could have dragged the mainstream leadership into a more hardline position resulting in Thursday’s editorial.