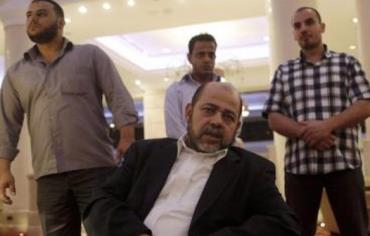 Palestinian negotiators will leave Cairo on Sunday unless Israel agrees to return to Egyptian-mediated negotiations.

Senior delegation member Moussa Abu Marzouk said the decision would be made after a meeting on Sunday with Egyptian mediators, who have met separately with each party about at least three times this week.

Delegation head Azzam Ahmed told Al Arabiya television the Palestinian factions in Cairo for the negotiations would leave “if it is confirmed to us that (Israel) will not return except with conditions.”

On Saturday night, senior Israeli diplomatic officials announced that they will not send a team back to Cairo to discuss a cease-fire until Hamas rocket fire ceases, and will respond forcefully to all Hamas attacks.

The officials said if there was a continuation of the rocket fire that began at 4 a.m on Friday, and intensified four hours later with the end of the 72-hour cease-fire, then Israel would consider “all options on the table” and was not limiting itself to striking back from the air.

The officials said the Israeli team that was in Cairo negotiating with the Egyptians over a longer-term deal returned to Israel at 7 a.m. on Friday when it became apparent that Hamas was not going to extend the cease-fire.

An Islamic Jihad spokesman responded to Israel’s departure from Egypt negotiations. “If Israel does not comply with the conditions, then life will not go back to normal for the residents of the Gaza border communities.”

Senior Hamas official Ismail Radwan said that the Palestinian delegation will not wait much longer before they retaliate.

It was also made clear that Israel would not conduct any type of negotiations under fire.

The full cabinet is scheduled to meet Sunday in Tel Aviv to discuss the developments.

Communications Minister Gilad Erdan, a member of the eight-person security cabinet, said in a Channel 2 interview Saturday night that while no one has a formula for ensuring that one day “it all ends,” the government is determined and has made commitments to the Israeli public that “what was, is not what will be, and we will stand by that promise.”

It is possible, Erdan said, that Israel might send its ground forces back in to Gaza.

“A wide ground incursion and the toppling of Hamas is being discussed,” he said.

Economy Minister Naftali Bennett said on Friday after the firing restarted that this was a test for Israel’s deterrence that would have ramifications for years. As such, he said, the response needed to be “hard and painful.”

He said Israel needed to decisively win this battle, whether UN Secretary- General Ban Ki-moon “likes it or not. Operation Protective Edge is not over, Hamas has not yet been defeated, and Israel’s citizens need to be strong and prepared for what comes next.”

Another security cabinet member, Justice Minister Tzipi Livni, said Hamas should not get anything it is asking from Israel that applies to a possible final agreement with the Palestinians, such as a safe passage – which they are demanding – from the Gaza Strip to the West Bank, an airport or a seaport.

“I support continuing firing toward Hamas,” she said. “We should not pay Hamas for quiet. Hamas’s fire will not bring it to better achievements.”

Hamas, meanwhile, warned over the weekend that it would continue to attack Israel as long as its demands are not fulfilled.

The warning came as a Palestinian delegation representing various groups, including Fatah, Hamas and Islamic Jihad, continued discussions with Egyptian security officials about achieving a long-term cease-fire with Israel.

The Hezbollah-affiliated newspaper Al-Akhbar quoted Hamas sources as saying that the movement would attack Tel Aviv on Sunday if its demands were not met by then.

The sources said the Palestinian delegation has informed the Egyptians that its members would leave Cairo on Sunday if no progress is made in the cease-fire talks.

However, the head of the Palestinian delegation, Azzam al-Ahmed of Fatah, said on Friday that the team would not leave Cairo until an agreement is reached that complies with all Palestinian demands, including giving the Gaza Strip its own airport and seaport.

“We haven’t asked for anything new and that’s why Israel has no right to say this is permitted or that it not permitted,” the Fatah official said. “We have told the Egyptians that we will stay in Cairo until we reach an agreement to end the bloodshed and lift the siege on the Gaza Strip.”

Hamas spokesman Fawzi Barhoum said, “There is no going back and the resistance will continue with full force. There will be no concessions on the demands presented by the Palestinian delegation in Cairo. Israel’s intransigence and foot-dragging won’t benefit it.”

Izzat al-Risheq, a Hamas member of the delegation, claimed that Israel used Saturday as an excuse to stay away from indirect talks [with Hamas] in Cairo.

“Its army is continuing its aggression and shelling of the Gaza Strip on Saturday,” Risheq said. “This excuse is silly.”

Hamas spokesman Sami Abu Zuhri said his movement would not make any concessions regarding its demand to have a seaport in the Gaza Strip.

“Such a port would be the Palestinian gate to the outside world,” he said.

“The weapons of the Palestinian resistance will stay as long as Israeli occupation exists on our occupied land,” Bahr said. “The painful strikes of the resistance on Israel will drive the Israeli negotiator to accept all the demands of the resistance. This is the only language of negotiations they understand.”

Meanwhile, a Palestinian official told AFP that Egyptian and Palestinian delegates have reportedly reached a new agreement on a draft cease-fire proposal that will be submitted to Israel.

According to the official, the deal would see the Palestinian Authority and the government in Cairo render control of the Rafah border between Gaza and Egypt.

Israeli officials told The Jerusalem Post that Israel already accepted the idea of Palestinian Authority security officials manning the Rafah proposal, when it was presented in Egypt’s initial cease-fire proposal some three weeks ago.

In addition, under the reported terms of the new proposal to be presented to Israel, Hamas would in effect enact a unity deal signed in April with the PA, entrusting the group’s demands for a port in Gaza to the Ramallah-based government for negotiations at a later point with Israel.

In a related development, Netanyahu gave interviews over the weekend to three leading US, French and German television stations.

In the interview with both Fox News and France’s ITV, the prime minister responded to criticism of civilian casualties by underlining an incident that happened during World War II.

Netanyahu told ITV that in 1944, “the British Royal Air Force sets out to bomb the Gestapo headquarters in Copenhagen. A legitimate target.

Okay? But the British pilots miss. And instead of the Gestapo headquarters, they hit a children’s hospital nearby, right next to it, and some 83 children, I think, are horribly burned to death.

That’s not a war crime. And that’s not a massacre. What that is, is a terrible tragedy of war that accompanies every legitimate action.”

In a related development, US President Barack Obama and British Prime Minister David Cameron on Saturday called for an immediate cessation of hostilities in Gaza and pressed for action that would lead to a permanent cease-fire.

“On Gaza, they condemned the resumption of rocket fire and called for an immediate cessation of hostilities leading to a sustainable ceasefire,” the White House said in a statement about the call between the two leaders. “President Obama and Prime Minister Cameron reiterated support for Israel’s right to self-defense while emphasizing the need for all sides to minimize civilian casualties.”