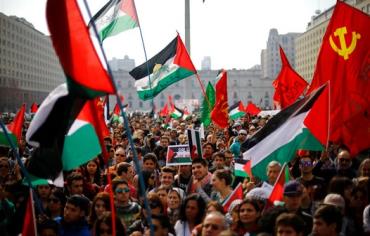 Supporters and members of the Palestine community attend a rally for peace in Gaza, in Santiago, August 9, 2014. Photo REUTERS

Some 5,000 people marched through the streets of Santiago on Saturday, to call for the Chilean government to break all ties with Israel.

Palestinian descendent Uasim Barros participated in the march and said that Chile’s continued ties with Israel would mean it is being an accomplice to the bombardment of the Gaza Strip.

“We are present at this march to demand that the Chilean state, once and for all, break all types of relationships with Israel. The government would be acting as an accomplice to this huge massacre that Israel is carrying out against Palestine,” he said.

Another Palestinian descendent also pleaded for Israel to stop the destruction and killings of his people.

“What they (Israel) is doing today is a genocide. They are killing the civilian population and I, as a daughter and granddaughter of Palestinians in Chile, I rise up here in Chile with the whole country to bring an end to this genocide,” said the woman, Stefany.

The protest was organized after Israel launched more than 30 air attacks in Gaza on Saturday, killing five Palestinians, in response to terrorist rocket fire at Israel as the conflict entered a second month following Hamas’ refusal to extend a three-day cease-fire that ended Friday morning.

The violence seemed to delay any progress in talks brokered by Egypt aimed at securing a permanent truce. Israel had no plans to send negotiators back to Cairo “as long as the shooting goes on”, an Israeli official said on condition of anonymity.

Egypt is meeting separately with each party. Israel and Hamas deny each other’s legitimacy, with Hamas rejecting Israel’s right to exist and Israel rejecting Hamas as a terrorist organization.

Gaza officials say the war has killed 1,880 Palestinians. Sixty-four IDF soldiers and three civilians have been killed in the conflict.

Regional neighbors such as Brazil, Peru and Ecuador have recalled their ambassadors in Israel amidst the violence. 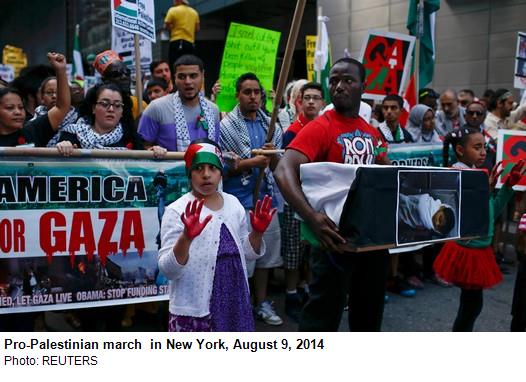 Meanwhile in New York, thousands of people took to the streets on Saturday to protest against Israel’s offensive in the Gaza Strip.

Waving Palestinian flags and ‘Gaza ‘ signs, some called for an end to US aid to the country.

In New York, the crowd marched through the bustling evening streets of Midtown Manhattan chanting “Free, free Palestine!” and “1,2,3,4, stop the killing, stop the war!”

The rally was organized by a coalition of groups that came together as “The World Stands with Gaza! International March to the UN.”

Also on Saturday, large-scale demonstrations in solidarity with the people of Gaza were also held in London and Cape Townwith tens of thousands of people participating in marches in both cities.