Tensions over the Israeli-Palestinian conflict are increasingly playing out in the microcosm of college campuses across the United States. 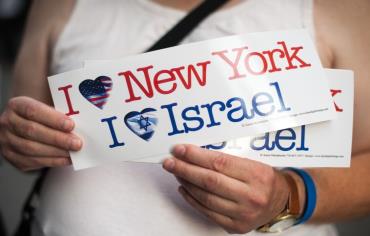 NEW YORK – Tensions over the Israeli-Palestinian conflict are increasingly playing out on college campuses across the US where student union leaders and activists on both sides act as local proxies in the global debate over war in the Middle East.

The latest episode at the collegiate level unfolded at the end of July, when a Florida student-government rejected a last-minute resolution proposed by a pro-Palestinian group on campus – which demanded the university divest from Israel.

The resolution, which called for the Florida Atlantic University’s Board of Trustees to “divest from companies which profit from the perpetuation of the prison-industrial complex and the Israeli-Palestinian conflict,” was proposed by Students for Justice in Palestine, just before the 5 p.m. Wednesday deadline for that week’s vote calendar.

The timing was intentional. The goal was to give the opposition as little time to read it as possible, said Didier Ortiz, who was SJP’s chapter president until his graduation last Tuesday.

Brett Cohen, the college liaison for the national pro-Israel advocacy group StandWithUs, noted that SJP seems to strike when pro-Israel students are least likely to be prepared.

Their actions, Cohen said, often seem to coincide directly with Jewish holidays, when pro-Israel students are most likely to be away from campus – at home celebrating.

“It’s a major tactic of SJP to try to catch the pro-Israel community off guard so there’s no opposition to what they want to do,” said Cohen.

However, in the day-and-a-half between SJP filing the resolution and the vote, StandWithUs mobilized, preparing pro-Israel students to speak before the House during Friday’s meeting.

“We were able to come in, work with the students, help them to prepare their arguments and practice their speeches,” Cohen said.

In American colleges Pro-Palestinian groups are staging protests using anti-apartheid walls, eviction notices and die-ins – protests in which participants lie down to symbolize dead bodies – Cohen said. Stand- WithUs is on call, ready to act at a moment’s notice, and come to the aid of Israel’s supporters around the country.

As a counter measure to SJP’s actions, StandWithUs provides pro-Israel campus groups with installations that rival the apartheid walls – covered with literature about Hamas, Jerusalem, refugees, diversity within Israel and more.

Cohen asked: “If we can’t have peace on campus between an anti-Israel and pro-Israel group, then what hope is there in the Middle East?”

SJP’s divestment resolution had two stipulations. The first was that the House of Representatives at FAU’s Boca Raton campus ask the university’s Board of Trustees to divest from companies profiting off the conflict, and the second called for investment in companies conscious of their carbon footprint.

Cohen called the wording of the proposed resolution deceptive.

“What kind of college student is going to say no to a bill supporting human rights?” On August 1, the University of California’s statewide student-workers union – which represents graduate student-teachers, teaching assistants, and other student employees – published an open letter urging its members to support a Boycott Divestment and Sanctions resolution recently passed by the union’s Joint Council.

Though student groups and union chapters at individual UC campuses have been involved with BDS efforts in the past, this marks the first time that the Uniting Academic Workers 2865 has collectively taken a side in the Middle East conflict, said Alborz Ghandehari, the union’s recording secretary.

With the passage of the BDS resolution, the union joins a growing list of UC campus groups calling for divestment, which include the University of California Student Association and the student-governments at UC San Diego, UC Irvine, UC Santa Cruz, UC Berkeley and UC Riverside.

The UAW 2865 resolution’s passage was a direct response to the latest surge of violence in the escalating conflict, according to Ghandehari.

“The timing of this open letter has everything to do with Israel’s attack,” he said.

At Florida Atlantic University last week, StandWithUs rallied students to get the divestment resolution nixed. But, Ortiz said that regardless of their action, he hadn’t expected it to pass.

Proposing the resolution was meant more to gauge the temperature of the House of Representatives and the campus as a whole, he said.

Oritz said he is confident that his SJP successors will continue pushing FAU’s student-government to consider divestment, and that the upcoming year will be one of action for pro-Palestinian groups on his alma mater’s campus, and around the country.

“From the outrage that we all feel, there’s no way this isn’t going to be a super active year,” Ortiz said.

Student governor Kathryn Edmunds, who spoke on behalf of FAU’s Boca Raton campus, said that student-government is not a place to make statements about a geopolitical conflict.

However, bringing resolutions unrelated to the students on FAU’s campus is not unprecedented, Edmunds said. In March 2012, after George Zimmerman shot and killed Trayvon Martin in Florida, FAU’s Broward Campus passed a resolution in support of repealing the Stand Your Ground laws that allowed Zimmerman to walk free.

“We only have so far of a reach. I don’t think that what’s going on in politics always belongs in student-governments. We don’t have the authority or the ability to make that kind of change. That’s not our place. Our place is to protect the students,” Edmunds said.