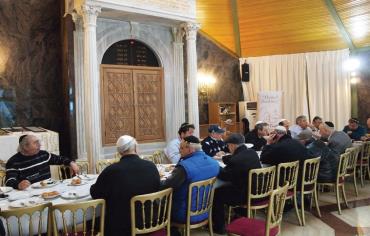 “He said he thought they were tapping his phone,” an Israeli businessman said.

A wholesale distributor of dietary supplements, “Alef” had recently been contacted by a Jewish pharmacist from Istanbul who was interested in buying a quantity of a herbal supplement but had said he did not feel safe speaking with an Israeli by phone. Could they speak by Skype instead, he was asked.

Alef waited for the call but it never came.

Despite a recent series of high-profile statements by Prime Minister Recep Tayyip Erdogan and other government figures blasting Israel and demanding Turkish Jews denounce the Jewish state’s actions in Gaza, the local community and its constituent members have been largely silent.

“I talked with our Jewish citizens’ leaders… and I stated that they should adopt a firm stance and release a statement against the Israeli government. I will contact them again, but whether or not they release a statement, we will never let Jewish people in Turkey get hurt,” Erdogan told the Daily Sabah.

The official policy of the Turkish Jewish community has long been one of studied silence. Last year, this reporter visited Istanbul and spoke with congregants at one of the city’s synagogues.

They expressed a strong affinity for Israel and stated they intended to celebrate Independence Day.

Standing behind the thick steel doors of the synagogue, protected by guards, those who spoke with The Jerusalem Post denied feeling any fear in Turkey but declined, to a man, to allow themselves to be quoted by name.

The official Jewish communal bodies declined to speak, either in person or by phone, and soon after publication, they contacted this newspaper through an intermediary to request the article on their community be taken off-line.

Asked for an interview for this article, over a year later, a spokesman again reiterated the community’s policy, stating “we are not giving interviews for the time being” and encouraging a perusal of press releases on their website. The emailed reply was simply signed “the Jewish Community of Turkey” without any name attached.

Erdogan’s recent statements have engendered harsh criticism from Jewish groups abroad if not at home.

His assertion that he would continue to protect the Jewish community while demanding its censure of Israel, Anti-Defamation League National Director Abraham Foxman wrote in The Huffington Post that the Turkish leader’s words implied he believes “the Jewish community would be better off – and safer in their own country – if they condemned Israel’s actions outright.”

“Asking the Jewish community to speak up about Israel reeks of anti-Semitism,” Foxman accused, blaming an increase in anti-Semitism in Turkey on “harsh comments about Jews and Israel made by Erdogan, other officials in his government and influential journalists” as well as the government’s close ties with Hamas.

Sixty-nine percent of Turks harbor anti-Semitic attitudes, according to a recent ADL poll.

Earlier this month, the head of the Insani Yardım Vakfı (IHH), the group responsible for the 2010 Gaza flotilla, was reported to have told Turkish television that “Turkish Jews will pay dearly” for Operation Protective Edge.

Turkish Jews have a “policy of silence,” said Rafael Sadi, a Jewish university chum of Erdogan’s, currently living in Tel Aviv. Blaming his former classmate for the rising anti-Semitism in the Muslim nation, Sadi said the mass media has “become a free platform for anti-Semitism” and that many Turks see Jews as less than equal citizens.

“The Turkish Jewish community will prefer to keep their mouths shut because of their public safety, and they are right to do this.”

Sadi also claimed to have been spied on by the government, stating that the Milli Istihbarat Teskilatı, or National Intelligence Organization, had opened his mail and tapped his phone.

“Everyone is scared,” but not necessarily of physical harm, he explained.

“There are other kinds of violence than the physical,” including the use of tax audits and other scare tactics.

Turkish Jews keeping their heads down is not a new phenomenon, explained Nimrod Goren of the Israeli Institute for Regional Foreign Policies.

“Almost a decade ago in 2005 there was a report done on levels of anti-Semitism in Turkey and the community itself did not want it to be published” because it “would encourage it further,” he said.

While Jews facing anti-Semitism in Europe may feel free to speak out because their governments do, the Turks perceive themselves to be a small and weak community that cannot respond in the same way.

There is a “very clear interest in keeping quiet about it,” he added.

Turkish Jews are “probably in panic,” Dr. Anat Lapidot-Firilla of the Van Leer Institute responded when asked about claims of government spying by Jewish figures.

“Many Turks including non-Jews told me the same things. It will not surprise me if they are right. Turkish authorities have zero tolerance to criticism.”

While aliya from the approximately 20,000-person community spiked between 2007 and 2011, with more than a 100 Turkish Jews coming to Israel annually, the level of immigration to the Jewish state has actually gone down over the past few years.

Those who do come, Sadi said, are usually younger, university-age Jews searching for an education and a better life abroad.