Five die and several others seriously wounded after Hamas tries to dismantle IDF missile, only to end up detonating it. 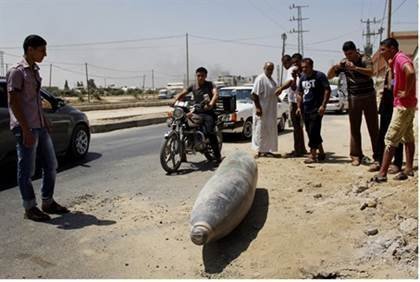 Hamas sources in Gaza report that a dud IDF missile exploded on Wednesday, killing five including an Italian journalist, after Hamas terrorists clumsily tried to dismantle the missile.

Hamas emergency services spokesperson Ashraf al-Qudra stated that in addition to the five dead, there are several more who are seriously wounded.

“A number of explosives experts were killed while dismantling a missile in Beit Lahiya. Among them was a foreign journalist,” Hamas Interior Ministry spokesperson Iyad al-Buzam told AFP.

The Italian government shortly thereafter named the dead journalist as Simone Camilli, a cameraman for Associated Press. AP confirmed the 35-year-old Italian had worked with them since 2005, and that AP photographer Hatem Moussa was also badly wounded in the explosion.

“Simone Camilli’s death is a tragedy for his family and for the country. Once more a reporter pays the price for a war that has lasted too many years,” said Italian Foreign Minister Federica Mogherini.

Muayin al-Masri, a spokesperson for Kamal Adwan hospital, stated earlier that the five dead included four Gaza residents and a foreign national. He added that five others were wounded, three of them in critical condition.

Camilli was reporting on the dismantling from the scene; his fixer was likewise killed, and another local journalist working with him, apparently Moussa, was badly wounded in the blast, according to an AFP correspondent in Gaza.

The IDF has not struck the Hamas terror enclave of Gaza since the current 72-hour ceasefire went into effect on Sunday at midnight, meaning the missile would have been sitting in Gaza at least two days.

The Italian journalist’s death hints at a wanton disregard for human life by the terrorist organization, given that in dismantling the missile casualties among those not involved in the actual dismantling, such as journalists, could have been avoided by distancing the public from the missile.

This fact may be unsurprising to many, given Hamas’s extensive and well-documented usage of human shields, and abuse of foreign journalists.

Illustrating the danger Hamas places foreign journalists in, an Indian TV crew last week captured footage of how Hamas planted a rocket launchpad adjacent to their hotel, “bang in the middle of what is a residential area full of hotels and apartment buildings.”

The rockets were launched hours later after the terrorists had cleared the area, in a clear strategy to tempt the IDF to conduct an airstrike response to take out the launcher and in the process kill civilians, even foreign journalists, so as to inflate casualty figures.