Three Jewish visitors to the Temple Mount on Tuesday were met by a throng of rabidly chanting Muslim visitors, who attempted to intimidate them off the holiest site in Judaism, and succeeded in forcing police to close Jewish access to the holy site.

Towards the start of the video from the incident, which was uploaded by the Joint HQ for Temple Movements, one of the Jews is observed approaching the police, arguing that the raucous chants constitute incitement.

The undaunted Jews continued their tour heedless of the threatening and incessant chants of “Allahu akbar,” with one sarcastically remarking “look, three Jews, how many Arabs; they are calling to G-d, they are praying to G-d because of us, it’s wonderful. You see what we did?”

Sizable police forces are seen in the video proving themselves unable to stop the mass mob of Muslim visitors from pursuing the three Jewish visitors, as they showered insults, curses and words of incitement against them for roughly 20 minutes.

After police were unable to separate the Muslims from the Jews, they decided to close the holiest site in Judaism to Jewish visitors almost as soon as it was opened for the day. Half an hour later, police also closed entrance for tourists of other religions, even as Muslim entry continued unchecked.

Can the Interior Committee change things? 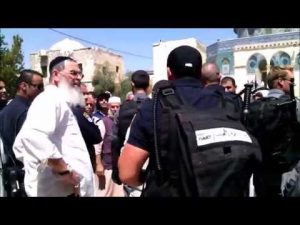 The incident comes just as the Knesset’s Interior Committee is set to discuss the police’s management of the holy site on Wednesday.

In light of the total collapse of religious rights for Jews at the site, the Joint HQ for Temple Movements announced it would demand a complete separation of Jews and Muslims at the Temple Mount during the Interior Committee meeting, citing the model of the Cave of Machpelah in Hevron.

The Joint HQ expressed its hopes that such a move would be taken “before G-d forbid a tragedy occurs at the site.”

It is worth noting that this is far from the first time that Muslim mobs have succeeded in forcing police to close the site to Jews; rioting Muslims threw objects and closed the site to Jews three days in a row in June.

More recently, Muslims burned and looted a police station on the Temple Mount last month in a shocking breakdown of law and order.

As for whether the Interior Committee will be able to change the situation, back in June the Committee’s sub-committee on Jewish prayer rights at the Temple Mount issued a report which surprisingly recommended maintaining the status quo at the Mount.

MK Zevulun Kalfa (Jewish Home) slammed the recommendations for in his words leaving the Mount in the hands of Hamas, even though they were made by members of his own Jewish Home party.

In particular, he noted the suggestions left the Jordanian Waqf (Islamic trust) with de facto rule, giving them the power to charge tourists money to visit the site. Further, the constant riotous Arab violence against Jewish visitors to the site would continue to end in a ban on entry for Jews under the recommendations.