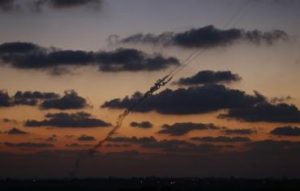 A smoke trail is seen as a rocket is launched from the northern Gaza Strip towards Israel July 16, 2014. Photo: REUTERS

One rocket launched by terrorists in the Gaza Strip struck open territory in the Sha’ar Hanegev Regional Council, the IDF confirmed. No damage or injuries were reported.

At around 9:45 p.m., more than two hours before the end of the 72 hour ceasefire, rocket sirens sounded in Ashkelon and surrounding areas, including towns and moshavim in the Yoav Regional Council, Lahish Regional Council, Hof Ashkelon Council, and elsewhere.

A Hamas spokesman denied on Wednesday any rockets had been fired from the Gaza Strip at Israel, after a rocket launched from the territory landed in southern Israel.

Spokesman Sami Abu Zuhri said Hamas “denies there was any rocket fire at the occupation this evening”, referring to Israel.

Meanwhile, the Palestinian delegation to the Cairo cease-fire talks was scheduled to hold a press conference at 9:30 p.m. to reply to the Egyptian proposal to extend the truce by another 72 hours.

However, the press conference was postponed until further notice, apparently at the request of the Egyptians.

Palestinian sources said the Egyptians were exerting heavy pressure on the Palestinian team to accept the proposal so as to allow more time to achieve a long-term cease-fire.

Earlier, the sources said that the Palestinian delegation might lave Cairo in wake of the failure of the cease-fire talks.

The sources quoted members of the Palestinian delegation as saying that little progress has been achieved so far in the last three days.

Meanwhile, a Hamas website reported that talks in Cairo had hit obstacles and Palestinian delegates were preparing to leave.

According to Israeli media reports, the Israeli team returned home earlier Wednesday evening from the indirect negotiations in the Egyptian capital.

Former Hamas Prime Minister Ismail Haniyeh said Wednesday that a any permanent cease-fire with Israel should include the lifting of the blockade on the Gaza Strip.

“The sacrifices of our people don’t allow for compromises on the rights and demands of the Palestinians,” Haniyeh said.

He expressed support for the Palestinian team in Cairo and urged its members not to “succumb to blackmail.”

Haniyeh’s statements were broadcast on Hamas’ Aqsa TV station shortly before the expiration of the cease-fire at Wednesday midnight.

Also on Wednesday, the United States said it wanted a long-term cease-fire secured between Israel and Hamas in Gaza, but will settle for an extension of the current, short-term truce if a larger accord cannot be reached tonight among negotiators in Cairo.

US President Barack Obama spoke to Prime Minister Benyamin Netanyahu by phone on Wednesday to express that message, urging the Israeli premier to seal a deal that would end the violence, after a month-long war led to extensive destruction in the Gaza Strip.

Ben Hartman, Jpost.com Staff and Reuters contributed to this report.

← HUGE PRO-KURDISH RALLY IN TEL AVIV, ISRAEL
Of All the Epic Robin Williams Quotes, this One is by Far the Greatest →