Following an international outcry this morning over a striped children’s shirt embossed with a yellow Star of David, fashion company Zara began removing the product page from its websites. While the statement from parent company Inditex was circumspect – explaining that the shirt was “inspired by classical Western films” and saying it was no longer available – the comment offered by Zara’s Israeli office went to greater lengths:

The item in question, part of the Cowboy Collection for babies, was inspired by the character of the sheriff in Wild West movies. The word ‘Sheriff’ is visible on the star at the front of the item. Nevertheless, we can understand the sensitive context and connotation that was created.

The item does not exist in Israel and as soon as the issue became clear, it was decided the product will be removed from shelves across the world and exterminated.

We sincerely apologize if, as a result, we have offended the feelings of our customers. 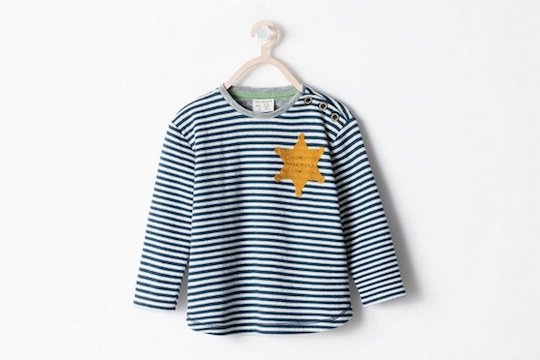 The exact Hebrew word is “ויושמדו.” While it can also be translated as “will be destroyed,” hashmada is the exact word used to describe the Nazi genocidal practices – for example, Mahanot haHashmada, extermination camps. And since this is the precise issue on which the apology is being offered, few Israeli readers would miss the connotation. You’d think Zara would take the time to thumb through a thesaurus, or something.