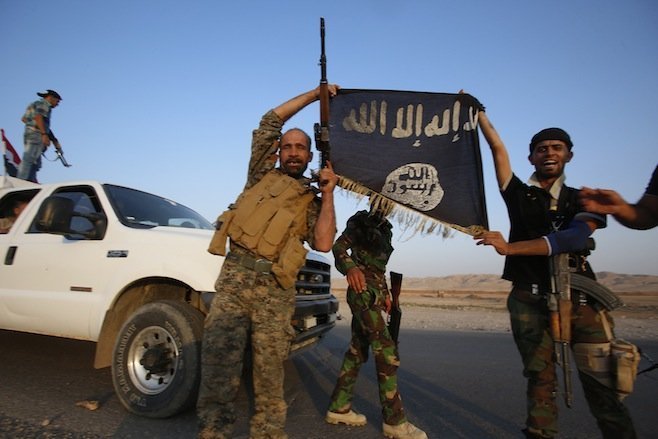 Members of the Islamic State, a violent group of extremists presently terrorizing Iraq and Syria, have released a video threatening President Vladimir Putin and vowing to wage war in Russia’s restive North Caucasus.

A video released by Al Arabiya and reportedly filmed in a seized airport in the Syrian province of Raqqa features an Islamic State fighter seated in a military jet, saying: “This message is for you, Vladimir Putin! These are the aircraft you sent to Bashar [Assad], and we’re going to send them to you. Remember that!”

The voice of a Russian speaker can also be heard in the video, describing the jets seized by Islamic State fighters. “This is Russian technology,” he says.

The Islamic State has openly declared war on the U.S., driving its point home by having beheaded two U.S. journalists in as many weeks. This is the first time members of the group have personally taunted the Russian president.

“We will with the consent of Allah free Chechnya and all of the Caucasus! The Islamic State is here and will stay here, and it will spread with the grace of Allah!” a fighter is shown saying in the video, which is available on YouTube with Russian subtitles.

Addressing Putin personally, the fighter added: “Your throne has already been shaken, it is under threat and will fall with our arrival [in Russia]. … We’re already on our way with the  will of Allah!”

Syria and Rise of IS

Russia has provoked condemnation from the Islamic State for seemingly having shielded the Syrian regime through the course of the country’s civil war. In the new video, radical fighters vow to destroy Assad, whom they refer to as a “pig.”

The Syrian conflict has thrust the Islamic State into the spotlight, with an estimated 50,000 fighters in the country, according to the Syrian Observatory for Human Rights. In June, members of the group seized control of several cities in Iraq, where there are now an estimated 30,000 Islamic State fighters.

Although no link has been proven between militants in Russia’s turbulent North Caucasus and the Islamic State, Russia’s Federal Security Service has estimated that hundreds of residents of the North Caucasus have gone to fight in Syria.

In the newly released video, members of the Islamic State declare the same goal as Russia’s domestic militant group the Caucasus Emirate — a development that is sure to alarm experts in Russia who have warned of radicalized fighters returning from Syria to Russian soil.

Chechen leader Ramzan Kadyrov took to Instagram on Wednesday to provide the first reaction by a Russian official to the Islamic State’s warning, referring to it as a “childish threat.”

In a statement posted alongside a heavily-filtered photo of himself wearing a T-shirt emblazoned with Putin’s face, Kadyrov said the Islamic State fighters were “saying only what their masters in the West’s security services were telling them to say.”

“These jerks have nothing to do with Islam. They are the blatant enemies of Muslims all over the world. Naive people decided to threaten Chechnya and all of Russia with two aircraft. They can sit in 2,000 aircraft and still not make it to Russia,” Kadyrov wrote.

“I declare, with all responsibility, that whoever gets it into their heads to threaten Russia and speak the name of President Vladimir Putin will be destroyed as soon as he says it,” he wrote, adding: “We won’t even wait for him to sit at the helm of a plane.”

On Tuesday, prior to the video’s release, Russia’s Foreign Ministry condemned the group’s “horrific crimes” in an official statement, calling for China and Western countries to join forces in helping bring an end to the group’s reign of terror.