Access ramp for non-Muslims to Judaism’s holiest site torn down in controversial decision to cave to Jordanian pressure. 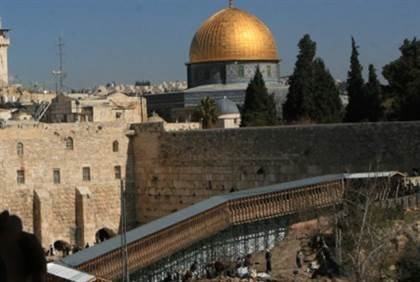 Israel on Wednesday dismantled a newly erected wooden access ramp to Jerusalem’s Temple Mount compound that would have increased access for non-Muslims but which angered Jordan, according to AFP.

The half-built structure was erected by Israel in the midst of the Gaza conflict in early August, triggering outrage from the Jordanian government, which oversees Muslim sites in Jerusalem.

It ran alongside a bigger wooden structure – the Rambam (Mughrabi) ramp – that leads from the Western Wall plaza up to the Temple Mount compound in Jerusalem’s Old City. The ramp is the only access to the Temple Mount for non-Muslims, including Jews – an arrangement which has angered many Jewish groups given the fact that the site is the holiest place in Judaism.

Apart from only being allowed one access point (compared to several for Muslims), Jews are also controversially forbidden from praying or conducting any forms of worship on the Temple Mount in an attempt to appease Muslim leaders who have regularly threatened violence if Jews are granted the freedom to worship there. Despite several court rulings stating such practices are illegal and discriminatory, Israeli police and Waqf authorities continue to enforce the prohibition on Jewish worship, with those who disobey facing arrest.

Jewish groups are also sometimes harassed by Islamists on the Mount, which today is the site of several Islamic mosques and shrines built atop the ruins of the Jewish Temples.

Last week, Israeli Prime Minister Binyamin Netanyahu ordered that the new structure be removed, saying its construction was “illegal” and had never received the proper authorization, a government source said.

But a senior Israeli official said that the construction of the temporary bridge was done by local officials, and was known to the Israel Antiquities Authority (IAA) and the Western Wall Heritage Foundation, but not the Jordanian Waqf Muslim Authority – and without the Jordanian government’s approval.

When the Prime Minister’s Office (PMO) learned of the establishment of the temporary bridge – from protest from the Jordanian government and royal family – it began investigating the legal ramifications of the issue with the Jerusalem Municipality and the Western Wall (Kotel) management.

That move was hailed by Jordan and by Wednesday afternoon most of the new ramp had been taken down, the AFP correspondent said.

The ramp’s construction is a politically charged issue because each side claims authority over it. Israel argues that because the ramp is located outside the Temple Mount compound, it should oversee the construction; Jordan insists that since the ramp leads to the Mount, it should manage or at least be consulted over any new construction plans.

The Jordanian Waqf has had de facto rule of the Mount since the 1967 Six-Day War, and jealously guards its control over the Temple Mount and its activities. As such, Amman has threatened action several times over what the Waqf and other groups claim is the “Judaization” of Judaism’s holiest site.

The Israeli government has traditionally sought to acquiesce to Jordanian demands over the Temple Mount, as it considers the Hashemite kingdom a key regional ally.

In April, Jordan summoned the Israeli ambassador to the country to protest the “Israeli provocations” on the Temple Mount. This took place after Israel closed the Mount to members of the Waqf as a result of riots by Arab youths. Several days earlier, Jordan urged the United Nations Security Council to end Israeli “escalation” at the Temple Mount after it was opened to Jewish visitors.

Previously, Jordan has threatened to revoke its 1994 peace treaty with Israel over a historic debate in the Knesset about providing religious freedoms and prayer rights for Jews on the site.