It’s hard to miss Mein Kampf on the shelves of India’s bookstores. 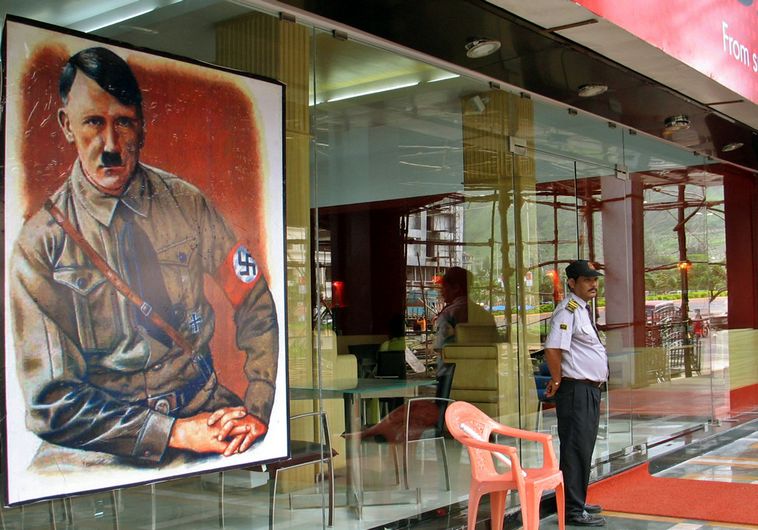 Growing up in India, Rohee Dasgupta didn’t realize the irony on display in bookstores across the country. There, next to the Diary of Anne Frank or biographies of Abraham Lincoln and Winston Churchill, would be a copy of Adolf Hitler’s infamous polemic, Mein Kampf. It was only after spending numerous years in the United Kingdom studying anthropology and Eastern European Jewish history that she was taken aback.

“It was rather striking and odd. It just shows ignorance to display Anne Frank and Mein Kampf on the same shelf,” says Dr. Dasgupta, now a professor of European Studies at O.P. Jindal Global University, a private Indian university north of Delhi.

It’s hard to miss Mein Kampf on the shelves of India’s bookstores. One of the country’s largest book chains, Crosswords, holds four copies of it in a glitzy and Western- infused shopping center in the northern city of Udaipur.

Small book vendors setting up shanty shops on the sidewalks around New Delhi’s upscale Connaught Place display the book prominently. In one of Delhi’s most popular local bookshops, Bahrisons, they always make sure to have two copies in stock.

“It’s a classic for us, we have to sell it,” said Mithilesh Singh, Bahrisons’ floor manager. When I first approached Singh to talk about the book he grinned.

“At least once a year someone from the West asks me questions about this book.”

He said on average the store sells up to 10 copies each month, and that those who buy it come from all walks of life.

Overhearing my conversation with Singh prompted Bahrisons patron Renuka Narayanan to add, “It’s curiosity about a really sick and evil mind. We read it the way you read [Karl Marx’s] Das Kapital.” Curiosity, at least in one part, stems from the fact that Hitler, and the book, “had such an impact.”

It doesn’t take long to realize that Hitler’s legacy in India greatly differs from that in the West. More removed from the traumas associated with World War II and the Holocaust, Indians approach Hitler from a distance not possible in societies where war veterans, Holocaust survivors and education about the war and its legacy are part of the national psyche.

When it comes to historical traumas that hit closer to home, however, the Indian approach displays a heightened awareness toward protecting individual and collective sensibilities. In August, India’s film classification board blocked the release of a film that allegedly glorified the two Sikh bodyguards who assassinated prime minister Indira Gandhi in 1984 – an act motivated by extremist Sikh nationalism.

Asked if she saw any irony in a society that views Hitler as a curious historical figure to be studied but blocks the release of a film providing a contentious perspective on a national historical event, Narayanan says no.

Dr. Dasgupta roots this apparent contradiction in emotional distance between Indians and historical global events. Indian education pays little attention to global events that aren’t focused on nationalism or freedom struggles. World War II is given only cursory treatment in schools. When she decided to pursue studies on Eastern European Jewry, where the Holocaust figures prominently, she realized she lacked any foundation in the subject from her schooling in India.

“I had to start from scratch,” she said, adding that as a result there is a gap, “an ignorance of history.”

This ignorance, according to Jael Silliman, a member of Calcutta’s once-sizeable and prominent Jewish community, is what allows Indians to limit their opinion of Hitler to what they see as his positive attributes and discuss them without any of the stigma that surrounds Hitler in the West. Silliman believes that those Indians who admire Hitler do so because they view him as a post- World War I patriot who tried to rebuild his nation.

“Those who like Hitler, I know it has nothing to do with me and other Jews. It doesn’t bother me. I just think, oh God, you’re so ignorant.”

Growing up, Silliman’s education in World War II and the Holocaust came because she heard stories first-hand from Jews who’d escaped Europe and settled in Calcutta.

But even this was limited and it was only when she spent time abroad that she learned the true totality of what Hitler had perpetrated.

Most Indians, however, do not have the exposure that Silliman and Dr. Dasgupta have. To them, according to Dr. Dasgupta, Hitler is “just a leader.”

The different attitudes that have given Hitler his unique Indian afterlife can surprise those from the West who are confronted by them.

Philipp Franz is a German exchange student from Munich studying law at O.P. Jindal Global University for the fall semester. Since leaving Germany – where Mein Kampf is banned and where he was raised and educated about the horrors of Nazism, he estimates he has had conversations with 25 different people, Indians of all ages from across the country, that invariably wind up being about Hitler. After discussing the recent World Cup, he says it’s the next subject to come up, and one he certainly wasn’t expecting to have come up in the way it has.

“They say ‘I like his kind of leadership.’ And the older people who say this, they know what happened. The 17-year-old in my hostel in his first year of university, okay, he might not know.”

Philipp’s impression, which Dr. Dasgupta confirms, is that there is a willingness to overlook Hitler’s most heinous acts, and be impressed by his “strength” as a leader.

“They are fascinated by the pomp and circumstances – the celebrity image of Hitler.”

In a country where many Indians want to believe a strong leader can transform a society for the better, images of tens of thousands of Germans standing at attention before their Fuhrer seems to speak to them, despite the evil that those rallies gave birth to.

One of Philipp’s greatest challenges has been to try and dispel the notion that any good came from those displays of force and power. Instead, it is a struggle to impress upon Indians the fact that one should not weigh the pros and cons of Hitler – “it’s not appropriate.”

Still, one concern that doesn’t come up when talking about the ubiquity of Mein Kampf throughout India is the existence of, or potential for, anti-Semitism.

Bahrisons bookstore, according to Singh, is confident that Mein Kampf’s message is not being taken to heart by those who read it. When asked if reading Mein Kampf might instil in readers negative attitudes toward Jews, Narayanan asked if I was kidding.

Stillman agrees. Anti-Semitism, she says, isn’t a factor at all in Hitler’s Indian popularity. She has never seen or experienced any form of it in India.

“I feel supremely secure in my Indian-Jewish identity. I feel beloved as a Jewish person in Calcutta.” She added, “Even when the Left here is being critical of Israel, there’s no element of anti-Semitism to it.”

In fact, her biggest concern over Mein Kampf’s popularity has nothing to do with anti-Semitism or Jewish identity.

Instead, she fears the book’s message can be abused by India’s rising Hindu nationalist movement. “[Mein Kampf] can be used to support a purist Hindu India where Muslims are persecuted.”

Such a sentiment, however, is not shared by the majority of Indians; they feel confident that their more benign approach to Hitler should be of no concern. In Bahrisons, Singh seemed almost amused by the continued interest Westerners display toward Mein Kampf in India.

Narayanan too, was taken aback by our whole conversation and the fact that Indian attitudes and approaches to Hitler would be at all unusual or controversial, and said, “I never thought twice about it.”

The author is an international lawyer based out of Toronto, but is currently spending a semester as a visiting law professor with a private university in India north of Delhi. His articles have appeared in Slate, OpenCanada, The Toronto Star, Huffington Post, The National Post, Embassy and The Jerusalem Post.