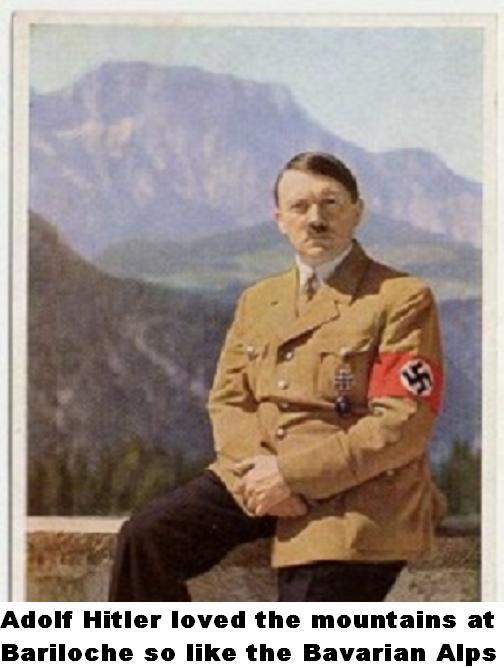 March 5th, 2012…Did Hitler live to old age here in Argentina? Sun Newspaper investigates mountain haven for Nazi war criminals.  STANDING beside his log chalet in the Argentine mountains Jorge Priebke happily reminisces about the Third Reich’s most evil men. Pointing to the next street, the old man revealed in a heavy German accent: “That’s the Hotel Campana where Dr Mengele stayed for a time. 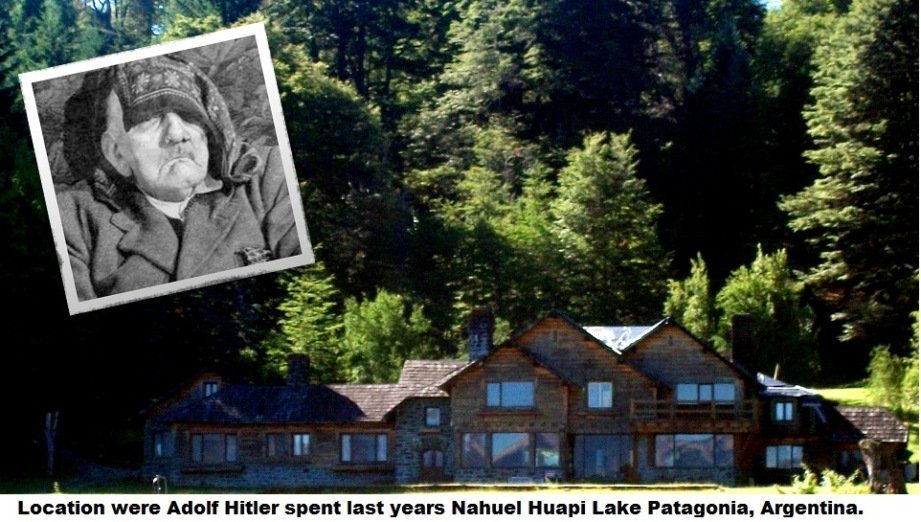 Investigator claims Nazi leader fled to Barcelona instead of committing suicide in Berlin bunker. Nazi leader Adolf Hitler spent a month in Spain before fleeing Europe for South America, according to an Argentine investigator. Abel Basti claims to have found an FBI document, which states Hitler did not commit suicide in his Berlin bunker. Instead, he flew to Spain with lover Eva Braun and 13 high-ranking Nazi officials. “Eichmann passed through here too. I worked with him for a year at the Mercedes Benz factory up in Buenos Aires but never met him here in Bariloche.  “He was very quiet.” The men so casually dropped into conversation by Priebke are Auschwitz concentration camp’s grotesque “Angel of Death” Dr Josef Mengele and Adolf Eichmann, coldly efficient architect of the Holocaust. 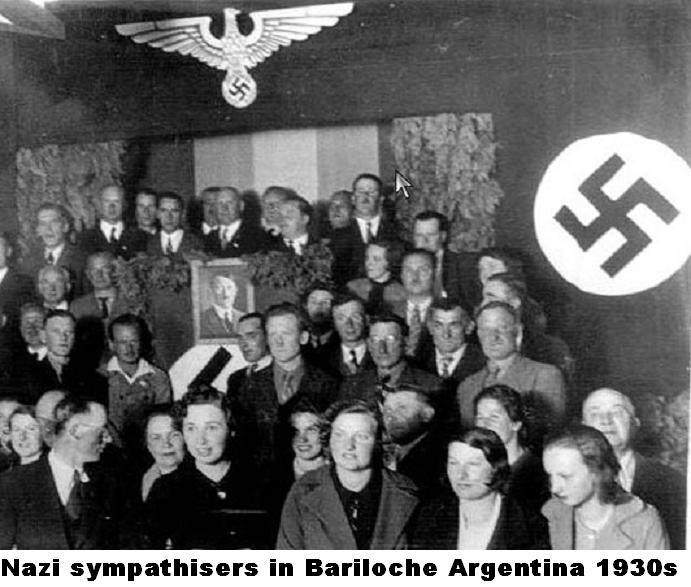 Nazi sympathisers in San Carlos de Bariloche Argentina; Bariloche made headlines in the international press in 1995 when it became known as a haven for Nazi war criminals such as the former SS Hauptsturmführer Erich Priebke. Priebke had been the director of the German School of Bariloche for many years. 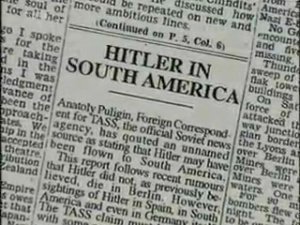 On July 16, 1945, the Chicago Times carried a sensational article on the Hitlers having slipped off to Argentina.

In his 2004 book Bariloche nazi-guía turística, Argentine author Abel Basti claims that Adolf Hitler and Eva Braun and their children lived in the surroundings of Bariloche for many years after World War II. A book published by British authors Gerrard Williams and Simon Dunstan in 2011 proposed that Hitler and Eva Braun hid at Hacienda San Ramon, six miles east of Bariloche, until the early 1960s. 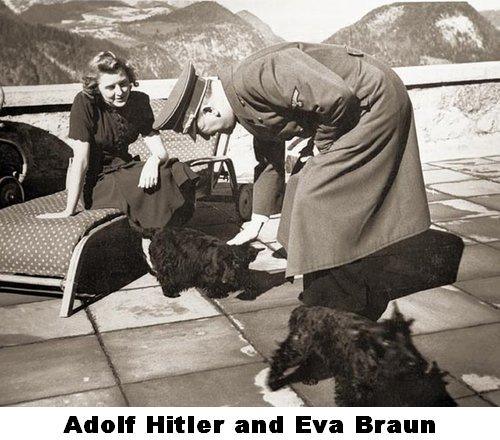 867 pages of files copied from FBI Headquarters in Washington, D.C., and archived on CD-ROM covering matters investigated in the United States by the bureau related to Adolf Hitler. Files contain approximately 350 narrative pages. Files document the FBI’s treatment of a wide variety of “alive” sightings of Hitler after the war. The bureau maintained files relating to sightings in Argentina. Contains FBI lab reports on authenticating Hitler’s marriage certificate, will, and other political documents.

Grey-haired Jorge Priebke’s Heidi-style cabin shrouded by the snow-tipped Andes is in the Bavarian-style ski resort of San Carlos de Bariloche, some 600miles south of Argentine capital Buenos Aires.  Built by German immigrants in the late 19th Century, today Bariloche’s fondue restaurants and lonely mountain trails are a haven for backpackers and hikers from all over the globe. 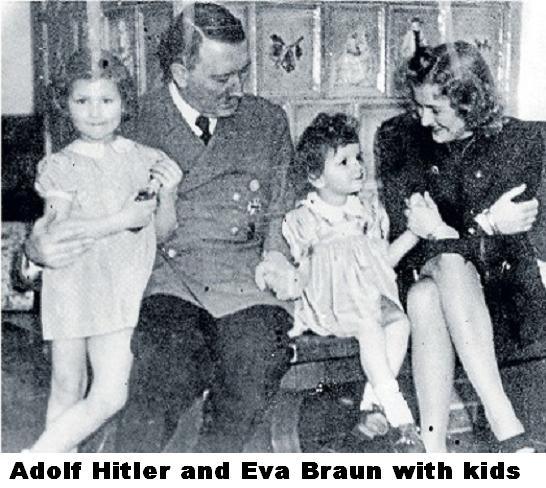 Controversial book; Grey Wolf, The Escape Of Adolf Hitler, by British authors Gerrard Williams and Simon Dunstan, published in October 2011, describes how Hitler and wife Eva Braun even had two daughters who were still alive around a decade ago. The mountains around Bariloche — so like the Bavarian Alps beloved by the Nazi hierarchy — were a home-from-home for a Nazi on the run in the late Forties. The secluded little town had long had Nazi sympathisers in its midst such as Adolph Eichmann who lived in Bariloche for years in the open. 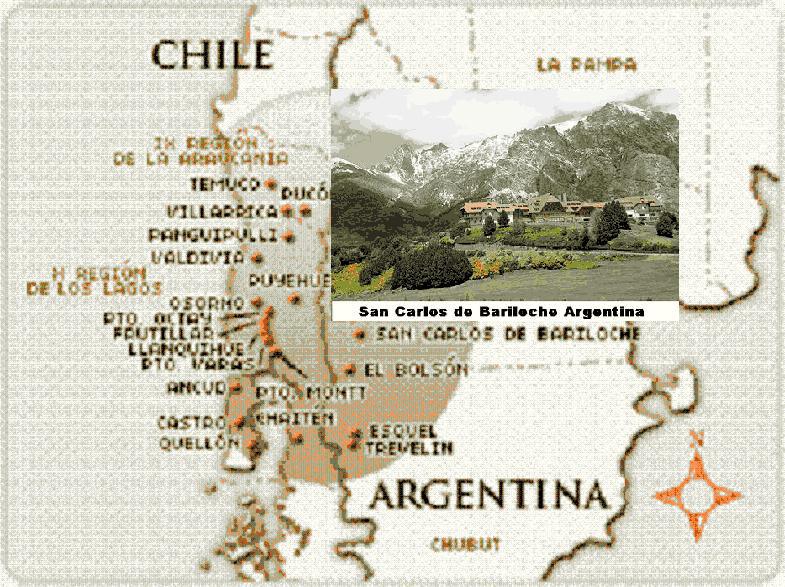 They insist Hitler and Braun escaped the bunker in a secret tunnel and were replaced by doubles who committed suicide.  And they claim it was the burned bodies of these doubles that were discovered by the avenging Red Army.  In what the authors call “the greatest sleight of hand in history” Hitler and Braun then escaped to Argentina in a submarine before setting up home in a remote hideaway close to Bariloche. Here, so the theory goes, the tormented Fuhrer spent his time plotting the emergence of  a Fourth Reich before dying at 73 in 1962, his remains cremated and scattered. 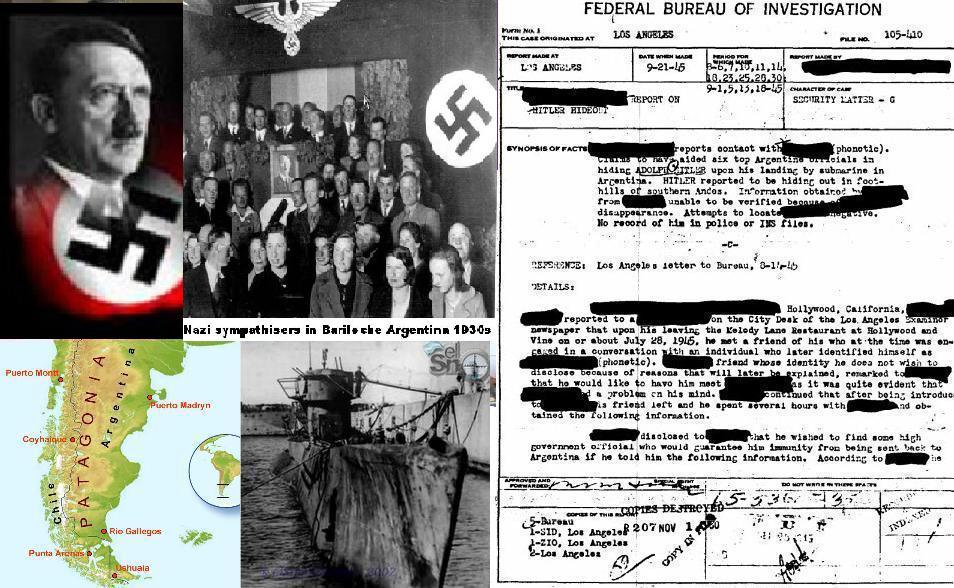 9/21/1945 FBI Los Angeles Report on adolf Hitler in Argentina, see above CLICK ON IMAGE TO ENLARGE.  U-boat U-977 arrived at Port of Mar Del Plata of Argentina on August 17, 1945, Hitler was to be on board.  What if Adolf Hitler was able to fly out of Berlin GR on April 27th 1945, after his phony suicide plot, with lover Eva Braun and their two children, girls. 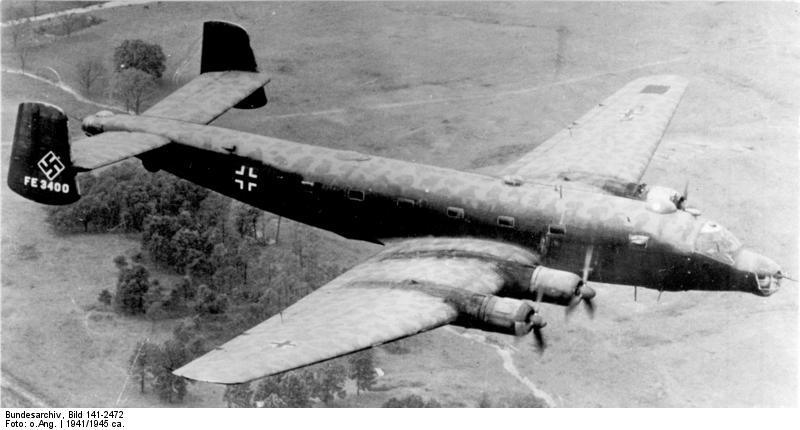 “They took off from Berlin and landed in Barcelona on April 27, 1945, via Linz in Austria,” claims the journalist, who is investigating post-World War II Nazi activity in his native Argentina. The FBI paperwork claims the Nazi leader and his party travelled in a Junkers 290 aircraft, which had the serial number 0163. In the summer of 1945, Allied forces discovered this plane in the Travemünde airbase, close to the German city of Hamburg.

Using its flight documentation, the military traced the aeroplane’s movements to Spain. In 1947, the US army searched for the Führer, but the Nazi leader had long gone. “Hitler used Spain as a ‘trampoline.’ He spent a month in the country before escaping to South America by submarine.  “By the time, US soldiers started their search for him, Hitler was in Argentina,” Basti claims. Germany was an close ally of General Franco, the right-wing dictator who ruled Spain following his victory in the Civil War in 1939 until his death in 1975. The Germans supplied Franco’s rebellion in the first days of the Civil War with supplies, such as ammunition, weapons and military intelligence. 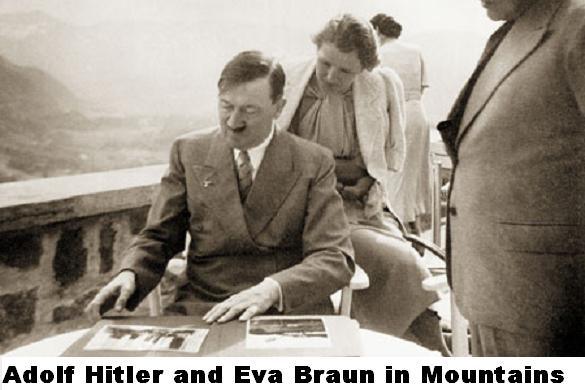 The German Air Force – the Luftwaffe – is claimed to be behind the bombing of the Basque town, Guernica, in 1937. Basti, who will soon publish Destino Patagonia. Cómo Escapó Hitler – his third book on Nazi movement in Argentina, believes the accepted suicide of Hitler was “a ruse,” so that the leader of the Third Reich could escape the advancing Allied soldiers.

The Germans left the body of Hitler’s double in the Bunker. The Nazis also left unknown corpses, which had in their pockets the paperwork of the hierarchy that escaped with the Führer. This deceived everyone into thinking they had all killed themselves. Basti believes that Hitler, Braun and the 13 officers arrived in Argentina, “between July and August 1945. He then moved between the provinces of Buenos Aires, Córdoba, Mendoza and La Rioja.” The 51-year-old journalist claims Hitler died in the South American country in 1960. Aribert Heim – the Austrian doctor know as the Butcher of Mauthausen for his vicious experiments on prisoners in Nazi concentration camps – also spent time in Spain before fleeing to Chile. 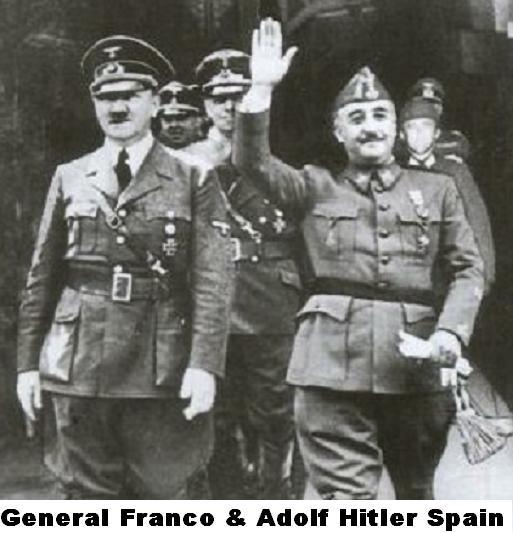 Thanks to a Spanish neo-Nazi network reminiscent of Frederick Forsyth’s partly-fictitious Odessa organisation, Otto Ernst Remer was living in a rented villa, thought to be paid for by Spanish neo-Nazis, overlooking the Mediterranean. He ws new here in 1994 but there are thought to be around 40 senior Nazi officers living prosperously in Spain, mostly along the Costa del Sol, around Barcelona, or on the Balearic Islands (same place Mohamed Atta and other Al-Qaeda members met in 2000).

While hundreds went on to Latin America after the war, partly the theme of Forsyth’s Odessa File, those who stayed here have been protected by an Odessa-like group called the Spanish Circle of Friends of Europe, known by its Spanish acronym, Cedade. The group is registered as a cultural association and is the hub of the European neo-Nazi movement’s propaganda network, printing neo-Nazi books, magazines and leaflets openly in Barcelona. 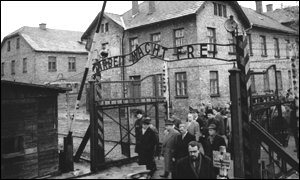 ‘This man should be extradited. I feel like I’m living under Franco again, in a country that remains a paradise for Nazi refugees,’ said Violeta Friedman, a 82-year-old Jew living in Madrid who survived Auschwitz but saw her parents, grandmother, brothers and sisters and other relatives gassed there. ‘The trouble is that the Spanish judicial system remains riddled with old Franquistas (Franco supporters).’

It was largely as a result of Mrs Friedman’s efforts that the Spanish parliament made the Auschwitz Lie illegal. Mrs Friedman won a long court battle against another former Nazi, Belgian SS General Leon Degrelle, several years ago after he, too, denied the Holocaust in a Spanish magazine interview. Degrelle spent the post-war years in Spain, protected first by Franco, then by the neo-Nazi network and died in Malaga this year, aged 87. Although he is theoretically under house arrest, there are no policemen outside Remer’s villa in Marbella and he has been seen, in a wheelchair pushed by friends, in the city centre. He does, not, however, receive a welcome from Johanna van Dalen, the Dutch owner of the villa next to his. Her Jewish husband died in Auschwitz in 1943.

← My ISIS boyfriend: A reporter’s undercover life with a terrorist
A More Religious, “Frummer” Megillat Esther? →