Rabbi Berel Wein giving a lecture on the origins of the ZOHAR (Book of Splendor, published in 1290 by Rabbi Moshe DeLeon in Spain). The lecture took place at Yeshivas AISH HATORAH.

In 9 Minutes, Rabbi Wein brings down R’ Yaakov Emden, the Chida, and R’ Elazar Falakish. It starts with R’ Moses DeLeon publishing the book in the 1400’s (not 1290) claiming that it was written by R’ Shimon bar Yochai (note: this is factually incorrect since R’ Moshe de Leon lived from 1240-1305 – https://en.wikipedia.org/wiki/Moses_de_Le%C3%B3n). Since a Sephardic Jew published it, it makes sense why most Ashkenazim didn’t adhere to the Zohar as they simply didn’t have the book.

R’ Yaakov Emden, who also owned a printing press and produced many great works (very controversial in his own right in trying to straighten out the world which pushed back), writes that he has no doubt that Zohar is not authentic. The writers introduced so many things that even if R’ Shimon bar Yochai produced such a Sefer, the Sefer that we have is not that Sefer. Later on, many people added to it. The printers, copyists added to it. It then became more and more and more. He can prove it: his book Mitpachas Sfarim which is devoted to this topic. There are ideas of R’ Shimon bar Yochai but it wasn’t written by him. Therefore, it’s not authentic.

The Chida accused R’ Yaakov Emden of Heresy on the basis of all the great Rabbis using it, that the Kabbala is based on it, etc.

The Chasam Sofer defended R’ Emden in the 1800’s. He said that if we could sift the book and keep only what R’ Shimon Bar Yochai kept, it would be a very very thin book. You would only have a few pages.

R’ Elazar Falakish (Talmid of the Noda B’Yehuda) stated that the Zohar is a forgery with many things added that never came by R’ Shimon bar Yochai. Anyone with a little Sechel would notice that. People after his lifetime are listed. Pieces of Rashi and Tosafos are listed there.

Here’s the kicker: the wife of R’ De Leon herself stated that her husband wrote it! When asked why, Mrs DeLeon said that a book written by an author such as Rabbi Shimon sells much better. Further, Mrs DeLeon justified her husband by saying that they desperately needed the income from the book in order to pay their rent and this is the reason why Rabbi Moshe DeLeon claimed that the true auther was Rabbi Shimon.

From Wikipedia (sourced by the Jewish Encyclopedia):

A story tells that after the death of Moses de Leon, a rich man of Avila named Joseph offered Moses’ widow (who had been left without any means of supporting herself) a large sum of money for the original from which her husband had made the copy. She confessed that her husband himself was the author of the work. She had asked him several times, she said, why he had chosen to credit his own teachings to another, and he had always answered that doctrines put into the mouth of the miracle-working Shimon bar Yochai would be a rich source of profit. The story indicates that shortly after its appearance the work was believed by some to have been written by Moses de Leon. (Jacobs, Joseph; Broydé, Isaac. “Zohar”. Jewish Encyclopedia. Funk & Wagnalls Company.)

However, Isaac (of Acco) evidently ignored the woman’s alleged confession in favor of the testimony of Joseph ben Todros and of Jacob, a pupil of Moses de León, both of whom assured him on oath that the work was not written by de Leon. Over time, the general view in the Jewish community came to be one of acceptance of Moses de Leon’s claims, with the Zohar seen as an authentic book of mysticism passed down from the 2nd century.

The Chabad website has an article authored by Rabbi Moshe Miller that gives the entire story in detail. Basically it was Mrs. de Leon’s word against her husbands’, who swore under oath shortly before he passed on, as well as other leading Sepharadi Rabbis. Rabbi Yitzchak of Akko naturally found the story hard to believe since her husband swore under oath which is a capital offense if done falsely.

The same article also offers the best possible reconciliation. The original Zohar might have been authored by R’ Shimon bar Yochai, though it was added on by other scholars over the years. In that respect it can be compared to the Talmud which went through various editions before ultimately being authored by Ravina and Rav Ashi. These two scholars also didn’t make up the Talmud “from scratch.” The fact that Mrs. De Leon said that her husband made it up from his head is unsettling indeed.

It’s therefore interesting in that most people today take it for granted that the Zohar was authored solely by Rashbi. The real answer is that it’s a Machlokes. 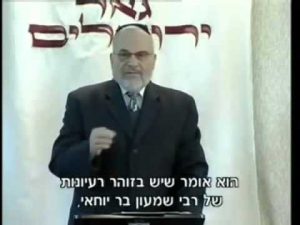 Also, for those that asked for it, here is the full speech: