What brings a young man born in modern, communist China to move to Israel and convert to Judaism? In a black hat and suit, Aaron Waldman talks about his long search for the truth and his family’s difficulty accepting his metamorphosis.

The guy sitting in front of has all the characteristics of an ultra-Orthodox person: A hat, a suit and a beard. His name is Aaron Waldman, but his parents, his grandparents and their grandparents were not born in Europe and likely never set foot in Israel.

Like Abraham, the father of the Jewish people, Chai left his homeland of China in favor of the land which was promised to a different people, far from everything he knew. Chai – “firewood” in English, “vald” (woods) in Yiddish – chose the name Waldman, “man of the wood.”

He see himself as a “rootless tree,” as “in modern China we were not educated with tradition. We were cut off from the root. I feel the spiritual emptiness.”

So what brings a young man born in modern, communist China to the State of Israel and to Hasidic Judaism? In fluent English (he also speaks “biblical Hebrew”), Waldman talks about his long search for the truth and his family’s difficulties accepting his metamorphosis. 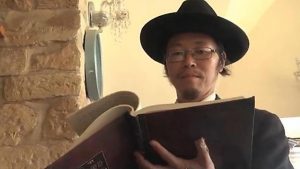 Aaron Waldman. ‘Judaism has the whole piece. So I made the choice that I want to live this way of life’ (Photo: Orot)

“When I was young, communism was the truth. After the research, I realized that it cannot be. At the end of university, I was approached by this English teacher who was a Christian missionary in disguise. He told me that a man who died on a cross, he was the truth. Who’s telling the truth?”

‘When I came to Israel, my parents were furious’

“In 1995, I started to research Christianity,” Waldman told Ynet and Orot TV. “I read maybe 10 versions of the Bible. English Bible or Chinese Bible are all translations. To know the truth, I have to read the original text. So in order to know, I learned Hebrew, biblical Hebrew. After a while, maybe five years, I could read the Bible in Hebrew.

“Who’s telling the truth? Check the Bible. Hashem is one, and they say Hashem is three. There’s no three there. You should keep Shabbos. The Christians don’t keep Shabbos.

“Five years later, in 2000, I reached the conclusion that Christianity was wrong. Judaism has the whole piece. So I made the choice that I want to live this way of life.” 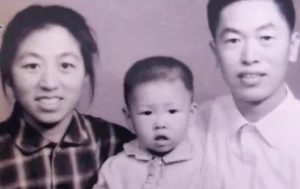 Chai as a child with his parents. ‘They thought that I joined an evil cult and I went to an evil country’ (Photo: Orot)

That was when Chai began intensive Judaism studies. “In China I couldn’t, there was no synagogue when I decided. How can I keep kashrut? So I decided I have to go away. I felt that the Land of Israel is my homeland. I found home. This was what I was looking for: A sincere, honest, devoted life,” he says.

“When I came to Israel my parents were furious. The media isn’t friendly to the Jewish people. We ‘occupied Arab lands,’ we ‘slaughtered or massacred the Arab people.’ So from my parents’ point of view, they thought that I joined an evil cult and I went to an evil country. Now I think they reconciled somewhat.”

Waldman likes to joke about the similarity between Judaism and the Chinese culture. “I wear a suit, I have a hat, and now I have a beard. But think about it, it isn’t such a big difference. This suit is made in China. It’s a Chinese suit. I have black shoes made in China. Also this hat, which they call a haredi hat, is also from China. So everything I have is made in china. So what’s the difference?”