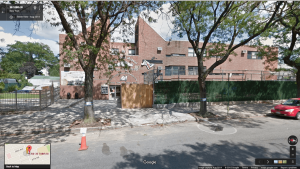 15. You have shut the classroom lights while a teacher was either pretending to conduct class or has given up the charade and was just playing guitar in starting the band Gefilte Fish.

14. You have not paid full tuition and fairly often went home midday due to a teacher strike.

13. You know how to use a killa’ bees baton and dis someone’s mom in one sweep.

12. You believed that air conditioner vent holes were synonymous for garbage pail.

11. You have eaten “salad surprise,” but the surprise was usually rather unmentionable, kind of like the thick slime in the hot chocolate.

10. You have had at least five high school math teachers, none of which were actually screened for qualifications before being hired, all of which are still waiting to get paid (though Mr. Epstein was pretty good).

9. You have spent many school periods doing other things aside from learning, often with the teacher’s participation.

8. You have witnessed more fights then a WWF referee, but as far as the teachers were concerned, you saw nothing.

7. You have kept your own roll of toilet paper in your locker.

6. You were completely oblivious to the idea that no matter how much Ebonics you spoke, you were still a Jewish kid with a Yarmulke in an all-boys yeshiva.

4. You have yet to see a win by the appropriately named school teams- the X-Cons (named after Rabbi Kahn) adorned with Malcolm X hats as uniforms and the orange-and-black-attired Flamers.

3. You still owe money to Lou, the 4-foot foul-mouthed Guatemalan ice cream truck guy who was kind enough to extend credit to OTI students that could not find change for a $100 bill.

2. You had a beeper, rainbow colored Hilfiger shirts and keys to the school.

1. Despite the years that have passed, you still have OTI/MOT friends that you are in contact with; often these were people you picked on or who picked on you. Go figure.