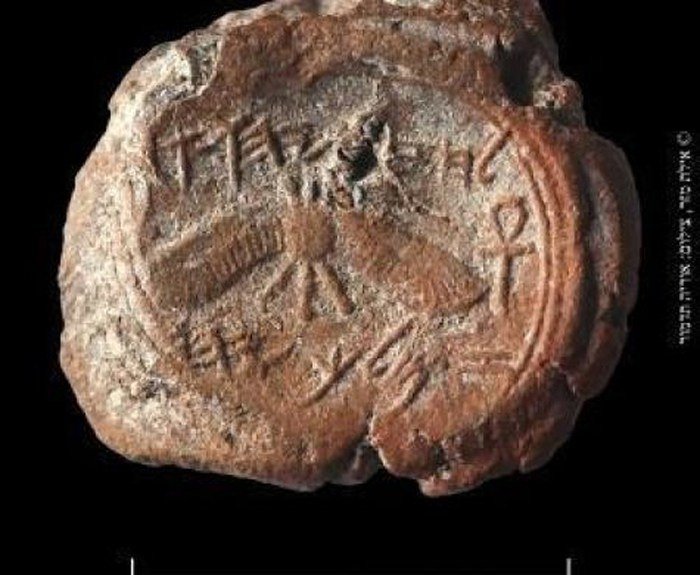 (JNi.media) The City of David excavations of the Jerusalem Hebrew University on Mount Ophel, at the foot of the southern wall of the Temple Mount compound, have yielded a sensational discovery: a seal (bulla) with the name of King Hezekiah (727-698 BCE). This external evidence further establishes the veracity of the biblical account of the nation of Israel’s empires going back some 3,000 years.

The seal is oval, with the dimensions of 8.6 by 9.7 mm, impressed on soft clay (Bulla) of 12 by 13 mm, about three millimeters thick. The bulla was used originally to sign a document written on papyrus and kept rolled and tied with thin twine whose subtle marks can be seen on the back of the bulla. The seal was discovered along with many pottery shards and various figurines and seals.

King Hezekiah’s bulla was discovered in a garbage heap that was dumped during or shortly after Hezekiah’s time, from a royal building that was used to store food. This building is part of a series of buildings, including a gate and towers, which were built in the second half of the tenth century BCE (the time of King Solomon), as part of the Ophel fortifications of the new government complex that connected the city of David with the Temple Mount. 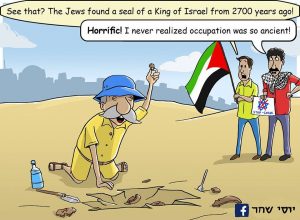 Another imprinted 33 seals were unearthed along with the bulla, some of them bearing Hebrew names, marked in their backs by coarse canvas and thick wires, which apparently were used to seal sacks containing food products. Each seal is surrounded by a sunken border left by the seal’s frame. The Hezekiah seal bears the inscription: “Hezekiah (son) Ahaz King of Judea,” with an emblem of the sun emblem with tilted down wings and two icons of the Ankh (symbol of life).

According to Dr. Eilat Mazar, “despite the fact that seals bearing Hezekiah’s name have been seen on the antiques market since the 1990s, some with the symbol of a winged scarab (dung beetle) and some with a winged sun symbol, this is the first time that a seal of a King of Israel or Judea was found in a scientific archaeological excavation.”

The discovery of a royal seal at the Ophel archaeological excavations brings to life in a direct way the biblical stories about King Hezekiah and the national affairs that took place in his days in the Royal Borough of Jerusalem.

The seal was discovered via a process of wet sifting of the layers of soil from the excavation, which was conducted at the sifting facility at Tsurim Valley, run by Dr. Gabi Barkai and Tzachi Dvira and sponsored by the Israel Nature and Parks Authority and the City of David Fund. The seal was found by Efrat Greenwald, a member of the Ophel team who was responsible for screening the excavation soil. Reut Ben-Arie, who prepared the Hebrew bullas from the Ophel excavations, was first to recognize that the seal belonged to King Hezekiah.

The following is an account of Hezekiah’s life from Kings II, 18, translated by Chabad:

2 He was twenty-five years old when he became king, and he reigned twenty-nine years in Jerusalem, and his mother’s name was Abi the daughter of Zechariah.

3 And he did what was right in the eyes of the Lord, like all that his father David had done.

4 He abolished the high places, and smashed the monuments, and cut down the asherah, and crushed the copper serpent that Moses had made, for until those days the children of Israel were burning incense to it; and he called it Nehushtan.

5 He trusted in the God of Israel there was none like him among all the kings of Judah who were after him, nor were there before him.

6 He cleaved to the Lord; he did not turn away from following Him; he kept His commandments, which He had commanded Moses.

7 Now the Lord was with him: in everything he ventured he succeeded; and he rebelled against the king of Assyria and did not serve him.

8 He slew the Philistines up to Gaza and its boundaries, from watchtower to fortified city.

← Evolution of Chassidic Dance
Top 10 Most Annoying People in Shul →