My Memories of the Rav
Abba Bronspigel 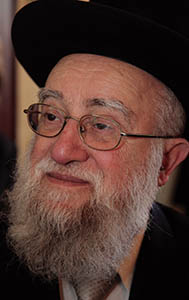 During my ten years studying under our revered teacher, Rav Yasha Be’er Soloveitchik, I developed a close relationship with him. Through his pure and intense attitude toward Torah study, he became my rebbe muvhok [distinguished teacher {above all others}] and the source for most of my Torah learning. He was a Talmudic innovationist par excellence, the caliber of which I have not seen since my time spent with him.

The Rav was always a very demanding teacher. However, by the time I entered his shiur, the Rav had already mellowed somewhat. Still, if a student was unprepared for shiur, the Rav would get very visibly upset. For instance, there were times when the Rav would ask students if they had prepared the commentary of the Ba’al Meor in anticipation for shiur. Many times, if the student reported that he had not prepared, the Rav would shout “I was up until three in the morning and you cannot have even the decency of looking at the Ba’al Meor?” The Rav controlled himself as much as possible, but he could not tolerate or understand students who neglected their learning.

In the late fifties, the Rav switched from giving shiur in Yiddish to English. At the beginning, he was very adamant to keep the shiur in Yiddish. This was due to the fact that when the Rav first accepted to teach at Yeshiva, he firmly wished to pattern his shiur after the way in which his father—whom the Rav effectively replaced as maggid shiur at Yeshiva—delivered his. When administrators would approach the Rav to switch the shiur to English, he refused by explaining that his father gave shiur in Yiddish and he planned to continue in the same style and tradition. Even when some suggested to him that switching to English would encourage more students to attend his shiur, the Rav still declined on the grounds that he was his father’s son and would therefore not deviate from the format already established at Yeshiva by his father many years before. Nonetheless, once students began to complain to the Rav that they might be able to gain more if he switched languages, he agreed to deliver shiur in English from that point onward.

The Rav spoke an excellent Yiddish and terrible English. To clarify, the Rav spoke a highly advanced English and used words that none of the students could understand. Not even Rabbi Aaron Lichtenstein—who had a PhD from Harvard in English—was completely familiar with the Rav’s English vocabulary and therefore was forced to frequently refer to a dictionary. The difficulty in understanding the Rav’s English stemmed from the fact that the Rav himself learned English from reading the dictionary and not from common speech. He therefore used fancy words and complex terminologies instead of a more commonly spoken vernacular.

Very often I was tempted to raise my hand and ask the Rav what a particular word meant. On one occasion, the Rav became flustered with a question I had asked during shiur and as a result called me a “Mexican jumping bean.” I wanted to at least know what that meant and began to raise my hand to ask “Rebbe, what does that mean?” but I thought better of it and kept quiet.

Aside from the regular shiur which he delivered at Yeshiva, the Rav customarily addressed various institutions with which he had affiliated himself. Specifically, the Rav delivered a number of addresses in front of the Mizrachi audience in support and praise of the State of Israel. Although the Rav was very much in favor of Israel, he was not afraid at times to openly criticize the State in the same way that one might expect the Satmar Rav might have. On one occasion, the Rav told a number of his students “We need Neturei Karta. For if not for them, who knows where we would be—they keep us grounded.” Every year the Rav would donate $500 from the charity fund he was appointed to allocate, to the leaders of the Neturei Karta. This is not to say that the Rav agreed with the group’s political positions, but he believed that their survival was essential for maintaining his own more central outlook on Zionism. It should also be noted that toward the end of his life the Rav quieted his public praise for Israel after witnessing how drastic the State’s shift was toward the left.

A point that should be made regarding the content on which the Rav lectured: he never publicly discussed secular education or Torah u-Madda on an ideological level. Privately, the Rav told several students to further their higher education; he advised me to attend Harvard for graduate school where I could study with his son-in-law, Dr. Isadore Twersky. It is true that the Rav promoted the notion of becoming a highly educated person for purposes of reaching a certain occupational plateau, but I never heard him speak specifically about Torah u-Madda or secular education.

The other European rabbis in America during the mid-twentieth century respected the Rav but strongly disagreed with him about such things as secular education. These rabbis held the Rav responsible for being the mentor of the Modern Orthodox rabbis—which is true. In later years, he was privately critical of the directions taken by both Yeshiva University and the Modern Orthodox community in general. Furthermore, there was a declaration by eleven roshei yeshiva prohibiting official dialogue between Orthodox and non-Orthodox rabbis. The Rav was also asked to sign this document but refused. From that point onward, many of the more influential American rabbis, including Rabbi Aharon Kotler, severed political ties with the Rav. Still, when great rabbis such as Rabbi Shneur Kotler and Rabbi Shlomo Razovsky fell ill, they demonstrated their personal respect for the Rav and sought medical advice exclusively from doctors referred to them by him

The Rav and Rabbi Moshe Feinstein were very close. Aside from being cousins, the two would meet very often. Rav Moshe understood that the Rav was special and was therefore apolitical about the debates surrounding the Rav and other rabbinical forces. Very often the Rav would refuse to answer halachik questions and would insist that we direct our question to Rav Moshe. In such a case where the Rav was aware of how Rav Moshe determined a particular halakhah, very often he would answer our questions based on the position and reasoning of Rav Moshe. This was by no means a general principle the Rav held to in determining halakhik decisions, but it does represent the great respect the Rav had for Rav Moshe’s brilliance.

At the present time, the legacy of the Rav has been distorted. The Rav was a very great person, but both the left and the right have unfortunately misrepresented the man that he was and his teachings. The Modern Orthodox presented the Rav as their mentor, who taught them to be exactly as they are. Specifically, they emphasize his abilities as a scholar and his philosophical expertise instead of focusing on his greatness in the realm of Torah. Unfortunately, the more rightwing yeshiva crowd has judged the Rav based on these students. The Rav had a great variety of students. He had students who were tremendous Torah learners as well as others who did not understand his shiurim and world outlook. This can be seen as the root of the confusion surrounding the legacy of the Rav today. As a result, two distinct sets of students were produced among those who attended the Rav’s shiur: There were those who were “learners,” and those who obtained smikha but were essentially preachers. My peers and I always assumed that the ones who would tell over the Rav’s Torah would be the former, but instead, the other group has published and told over the Rav’s so-called philosophies.

It is true that there were a few times when the Rav was asked to deliver a shiur at a secular university or someplace of the sort and would aim those shiurim at college students or irreligious people. It was in this setting that the Rav spoke a different language from the one more familiar to his students. On such occasions, the Rav would put down his Talmudic texts and review philosophies and the sciences he had learned during his training at the University of Berlin.

To be sure, one cannot state that those who claim that he was very knowledgeable in philosophies are truly wrong. Nevertheless, the Rav was essentially a learner whose main philosophical ideas were derived from his studies of the Talmud and Rambam. This is how the Rav’s students remember him.

Like any teacher, the Rav would state something that could be interpreted and construed in several ways. This applies in respect to both halakhah and hashkafa [philosophy]. To this end, the more modern students sitting in the Rav’s shiur interpreted his words for what they wanted their appointed mentor to say; they used them for their own ideological support.

For instance, the Rav was opposed to reciting hallel on Yom HaAtzma’ut [Israel Independence Day] and said so publicly in a yahrzeit shiur for his father. Nonetheless, the public now remembers the Rav as an advocate for such a practice. I remember being approached many years ago by several of my students at Yeshiva who claimed that the Rav did in fact say hallel on Yom HaAtzma’ut. I approached the Rav to ask if he had changed his halakhik decision on the matter. He answered that when he davened at Yeshiva on Yom HaAtzma’ut, in order to avoid commotion, he would hold his siddur to his face and make believe that he too was reciting hallel in accordance with the custom of Yeshiva. While this distortion is not as severe as others, it is an example of the way in which current public rabbinical figures have warped the way in which the Orthodox community remembers the Rav. It represents a trend which has continued since the Rav’s passing.

It bears mentioning that what the yeshiva world has done to the Rav is equally disturbing. They have stripped him of his Torah genius. While some of these individuals have simply adopted the version of the Rav as presented by the Modern Orthodox community, others who either knew the Rav or were aware of his Torah stature choose to ignore it and diminish his greatness. Still, I cannot argue with this particular group because the development of the Rav’s left-wing students hurt any serious attempt to refute their yeshiva world.

The Rav had an uplifting influence on thousands of students. However, owing to the diversity of Yeshiva and the Orthodox community, the essence of the Rav, the study of Torah through the traditional lens of his father and grandfather, has been shattered into varied shapes and sizes.

From Mentor of Generations.

← Letters to the Editor — By Rabbi Abba Bronspigel, Rabbi Yosef Blau, Yoni Graber, and Ira Kukin
How Indigo was made →