Techeiles is a Mitzva explicitely stated in the Torah to integrate with Tzitzis. Strangely, this faded out of practice for 1,300 years, as the precise identity of the Chilazon and method of dyeing was lost. Over the span of the last close to 200 years, the murex/hexaplex trunculus sea snail/shellfish was discovered to produce blue (starting with Bartolomeo Bizio in 1833), researched extensively by Chief Rabbi Yitzchak Halevi Herzog, and even further researched and developed from 1969 until today by organizations like Keren HaTekhelet (run by Dr. Israel Ziderman), Ptil Tekhelet (initiated by R’ Eliyahu Tavger and today run by Baruch Sterman), and others. One of the items Dr. Ziderman mentioned earlier was that the snails fished across the Mediterranean are from other countries which at a whim can easily cut off their snail supply tomorrow. In Israel these snails are considered a protected species and cannot be fished en masse. So how does a Jew get these snails produced en masse for possibly fulfilling this mitzva of Techeiles?

Dr. Ziderman mentioned that his colleague Prof. Muki Shpiegel received a government grant to start breeding these snails internally using tanks. This breeding, known as mariculture, is normally used for human consumption as food, but in this case it’s for the dye. On December 23rd Dr. Ziderman and his son Chanan visited Prof. Shpiegel at his laboratory at Haifa University, with some promising updates. 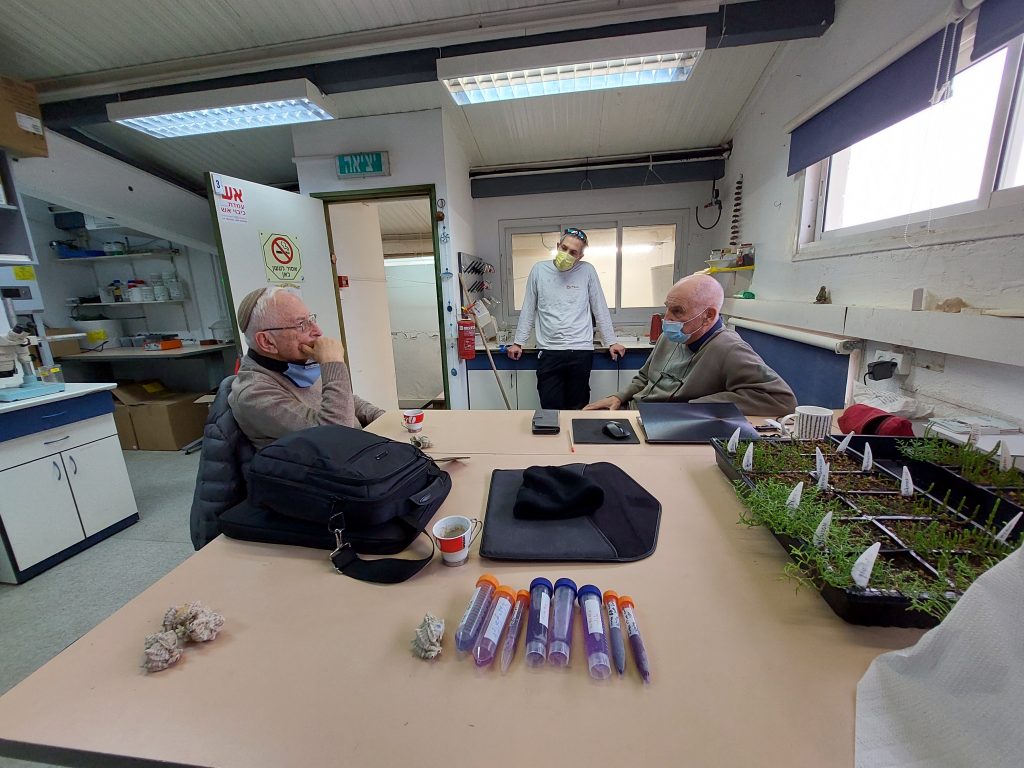 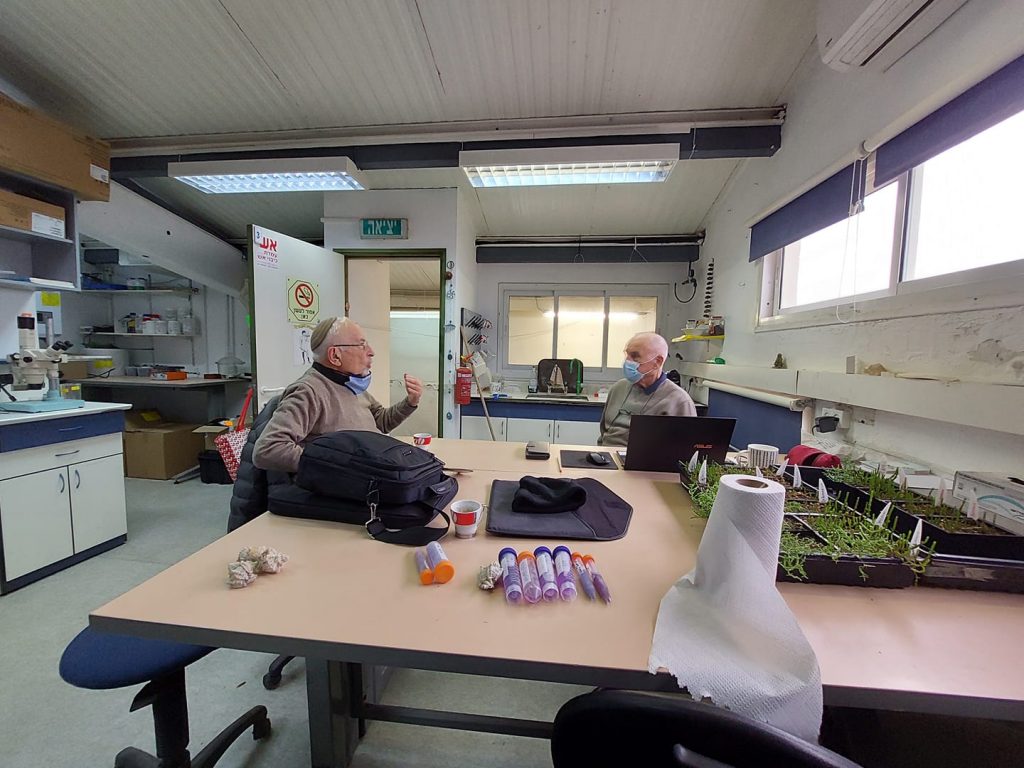 First of all, Professor Shpiegel and his team received a grant of $600,000 for 3 years, spread across 3-4 people to work on it. They are presently growing snails, and monitoring variables like what they eat and the temperatures they thrive in. It takes these snails four years to get from 1-2 cm to a reasonably large size – 6 cm or 1.5 inches. The snails in the accompanied pictures are colored differently from “sea fouling” that has zero influence from external pollutants like petrol etc. What’s interesting is that a snail in its environment that’s white after being dead retains a violet tinge, also known as coralline algae, a form of “sea fouling.” 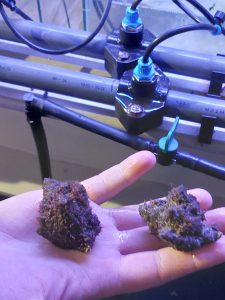 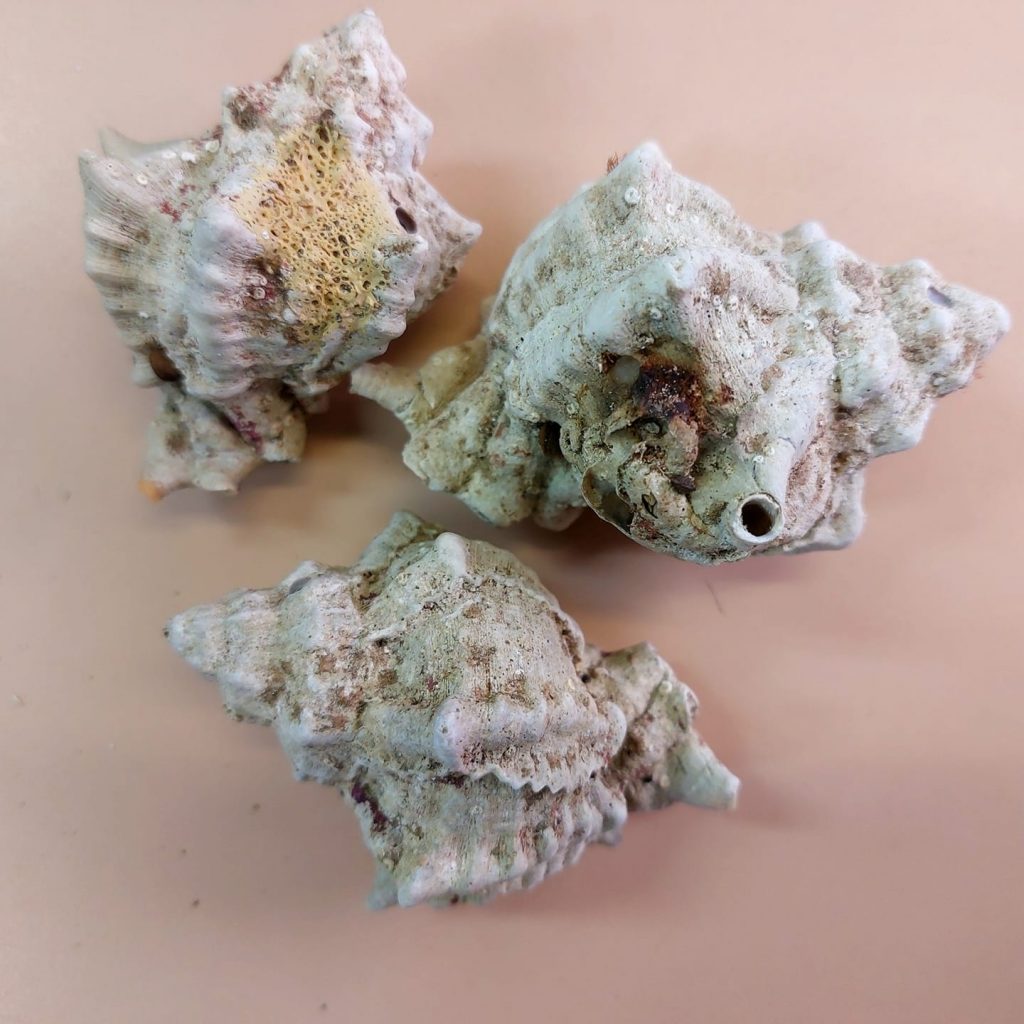 The holes drilled here are from other snails that killed them, since the murex species is carnivorous and even cannibalistic.

Different colors have been proven to be produced by variables such as exposure to light, snail size, and the food they eat. They are also separated into separated tanks so they won’t eat each other. This can further isolate different colors within the “blue” range. The Techeiles-blue that Ptil presently gets is from thousands of snails of all types and conditions, thereby producing a mix which produce the blue we all identify with today.

These are dye colors extracted from different murex trunculus snails Some are greenish-blue, some violet purple, and some are violet-blue. One thing that Israel Ziderman and Baruch Sterman agree on is that all these colors are Kosher for Techeiles as long as it stems from the murex trunculus, though Baruch Sterman admits that he’s aiming for sky blue as per the Rishonim and Acharonim, as well as by guidance of R’ Eliyahu Tavger. 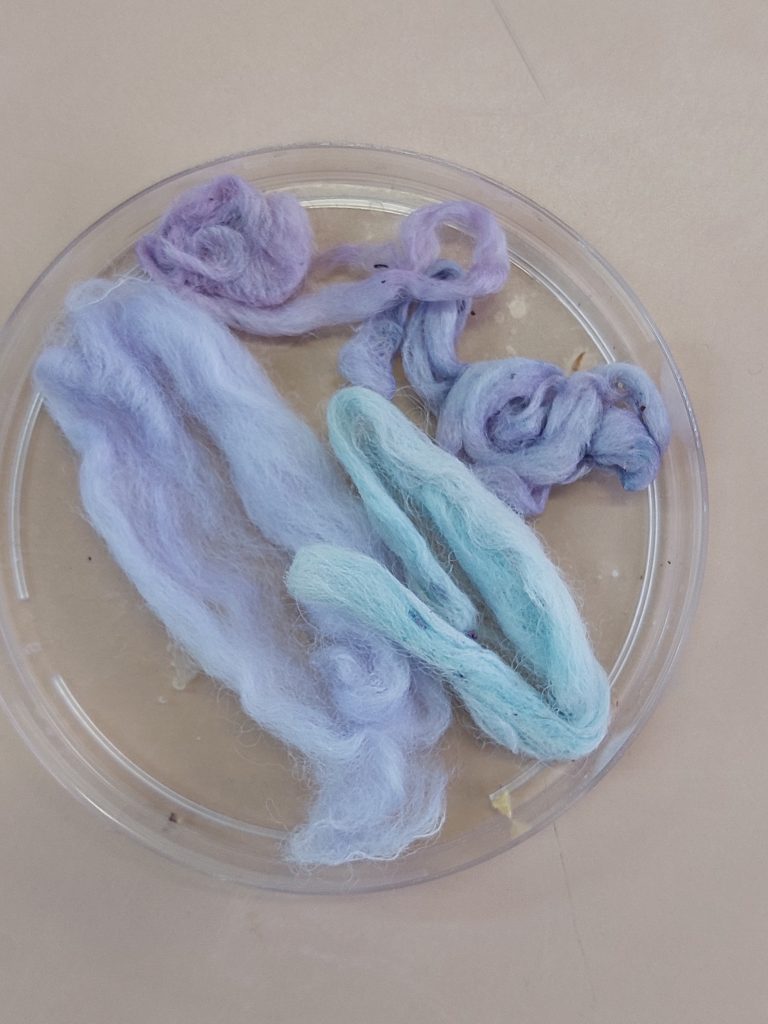 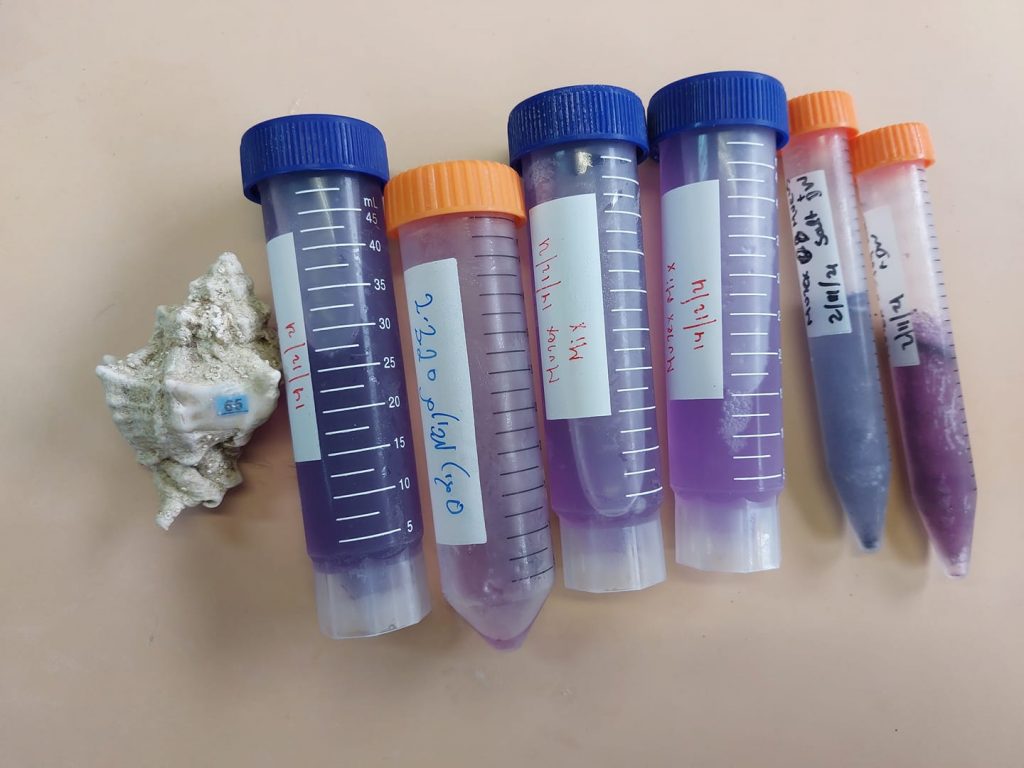 In the two years since starting this projected Muki Shpiegel has also researched a business plan to grow snails and further develop how they eat, as well as write a book how to build such a plant in Hof Dor-Hadera. Israel Ziderman sees this progress on religious/academic grounds, and Chanan Ziderman sees this as an extravagant way to educate people. 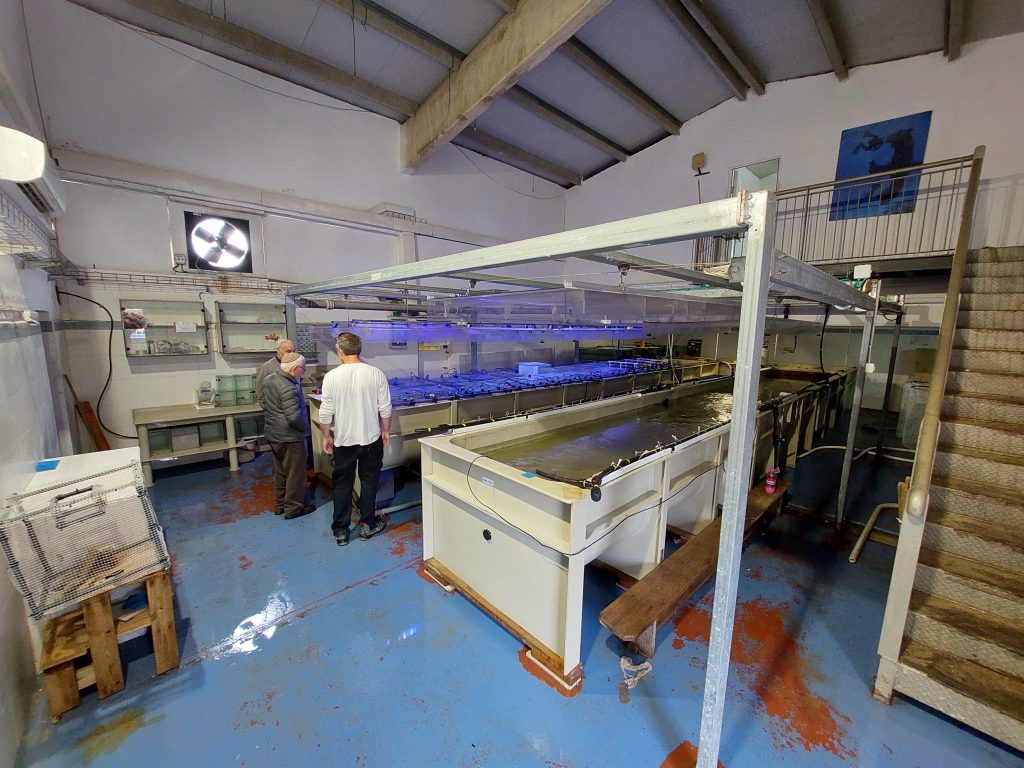 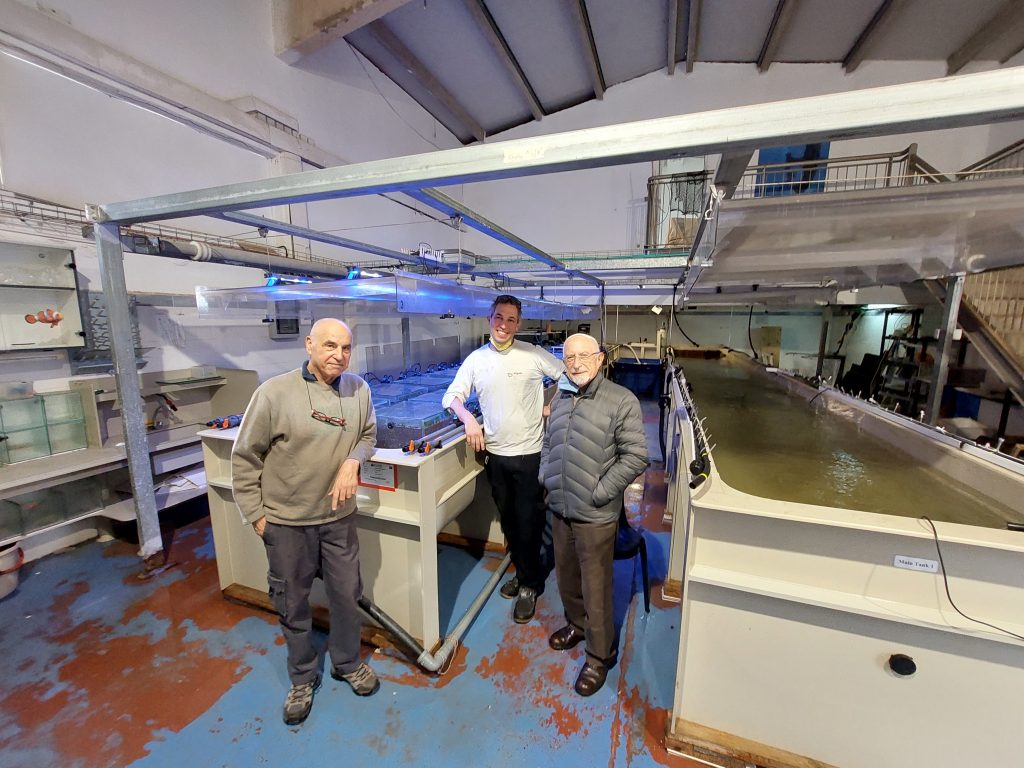 The goal is strictly philanthropic: the Zidermans want to distribute this otherwise expensive commodity for free (or a suggested donation of 50 NIS). Clearly if people could donate further to the cause it would significantly drop the cost of production. They’re presently looking to raise $40 million USD which the Israeli government would give half to. Chanan Ziderman is confident he can raise this sort of capital, since Jay Schottenstein himself donated less than $10 million USD to start the Artscroll Gemara translation revolution we have today.

To reiterate, these snails will be grown and produced like agriculture – get them to 6-8 cm, placing them in small saltwater baths and constantly feeding them, such as growing mushrooms. This is an expensive yet important endeavor.

Another development Muki Shpiegel has stated is that he has now developed a technique to milk these snails for their dye without killing them. This is important because their lifespans can improve without worries of where to get more of these snails.