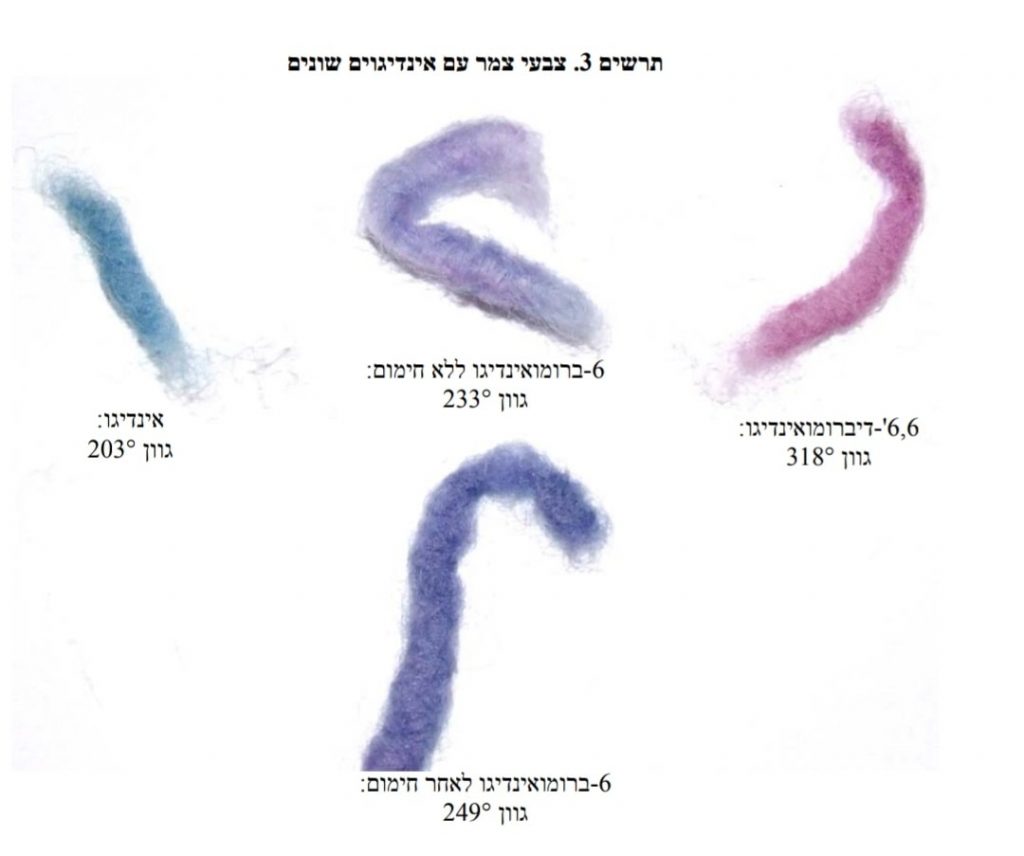 The root of argaman seems to be comprised of five letters: aleph-reish-gimmel-mem-nun. When writing about four- (quadriliteral) or five- (pentaliteral) letter roots in Hebrew, Ibn Ezra asserts that such atypical words are either compound roots comprised of multiple roots fused together, or are loanwords borrowed from a language other than Hebrew.

Scholars like Rabbi Dr. Ernest Klein (1899-1983) and Dr. Chaim Tawil see the Hebrew argaman as borrowed from the Akkadian argamannu. The famous American archeologist William Foxwell Albright (1891-1971) argued that the Hebrew word argaman cognates with similar Hittite and Ugaritic words that mean “tribute/offering,” and thus evoke argaman as an expensive dyed cloth that was often paid as tribute.

In detailing the laws of the Temple and its paraphernalia, Maimonides (Laws of Klei HaMikdash 8:13) writes that argaman refers to wool that was dyed red. In his commentary to the Mishnah, Maimonides (to Kilayim 9:1) again defines argaman, this time using the Arabic word laca. Bartenuro (there) uses the same word, but also clarifies that argaman was wool dyed red. The word lac is also an English word and refers to a “red resin”; it comes up more often in the English terms shellac and lacquer, which refer to red coloring. Maimonides’ approach that argaman refers to something dyed red is echoed by later authorities, including his son Rabbi Avraham Maimuni (to Ex. 25:4), Rabbi Tanchum HaYerushalmi (to Dan. 5:7), and Torat HaMincha (Parashat Titzaveh).

Explaining argaman as red does not preclude explaining argaman as orange, for orange is a shade of red mixed with yellow. What is clear, though, is that none of these sources see argaman as a mixture of red and blue/green. This omission seems to obviate the notion that argaman refers to what we call purple. Moreover, all the commentators agree that argaman does not actually denote a color but refers to woolen fabric dyed a certain color.

Maimonides’ famed interlocutor Rabbi Avraham ben David of Posquieres (1110-1180), also known as Raavad, disagrees with his position. He asserts that argaman refers to something comprised of two or three colors woven (arug) together. As Rabbi Yosef Kurkis (circa. 1540) and Rabbi Yosef Karo (1488-1575) clarify, Raavad understood the word argaman as a portmanteau of the triliteral root aleph-reish-gimmel (like in arigah, “weaving/tapestry”) and the word min (“species/type”). Thus, he understood argaman as reflecting a sort of panoply of colors rather than a specific color.

The Midrash (Bamidbar Rabbah §12:4) states that argaman alludes to the sun, which prepares (oreg, literally “weaves”) different forms of “sustenance” (manna). Alternatively, argaman is a reference to G-d who “weaves (oreg) together the world, so that each thing brings out its species (min), and one species will not mix with another.” Similarly, the Zohar in Idra Rabbah (141b) seems to understand that argaman refers to a hue of red that includes other shades as well (see also Zohar Terumah 139a).

Rashi (to Ps. 68:28), based on Machberet Menachem, seems to explain that argaman is derived from the triliteral root reish-gimmel-mem, which usually means “gathering” or “stoning somebody to death.” As Rashi explains it, that root is, in turn, related to the root reish-kuf-mem (possibly via the interchangeability of kuf and gimmel) which usually refers to embroidery. Although Rashi does not explicitly make this point, the common denominator between all the meanings of reish-kuf-mem and reish-gimmel-mem is that they refer to a gathering, whether of multiple stones to kill a person or multiple threads for needlework. This perhaps suggests that Rashi follows Raavad’s understanding of argaman as consisting of multiple shades joined together.

Like Rashi, Ibn Ezra (to Prov. 26:8) seems to understand argaman as a derivative of the root reish-gimmel-mem, but here referring to “exalted” things, with argaman meaning an “exalted” kind of dyed fabric.

Even though Raavad, Rashi, and the others do not explicitly identify argaman as red, that does seem to be their understanding, with argaman including multiple shades of red. Professor Athalya Brenner-Idan sees argaman as a general term that includes various shades of red ranging from pink to violet/dark purple. She supports this position by noting that the Temple Scroll (found within the Dead Sea Scrolls) uses the expression argaman adom (“red argaman“), implying that argaman alone can also include shades not typically considered strictly “red.”

In some cases it is fairly clear that argaman does not refer to purple. For example, Rashi (to Song of Songs 7:6) implies that argaman is a color sometimes found in women’s hair. Yet, as Brenner-Idan first pointed out, it is unsatisfactory to understand argaman as referring to purple in that case, because no natural hair is purple. In that instance, she supposes that argaman may not refer to a specific color but rather serves as a stand-in for any expensive or rare item. (See also Targum Onkelos (to Gen. 49:11) and Rashi (there) who write that argaman resembles the color of wine, which again seemingly precludes argaman as referring to purple.

That said, the Septuagint translates argaman into Greek as porphyra, which is the antecedent of the Latin purpura, and, ultimately, the Old English word purpure. The Modern English word purple derives from those earlier words, but did not always refer exclusively to the red-blue combination with which most English speakers are now familiar. Rather, in several languages the word purple means “red,” and the word for what we call “purple” is actually violet. The same was true in English until relatively recently.

The Midrash (Bamidbar Rabbah §12:4) states that argaman is the most esteemed of the different fabrics used in the Tabernacle and Temple because it represents the garments used by royalty.

In 1894, Yechiel Michel Pines introduced a new word for purple: segol. This word seems to be influenced by the English word violet, which was originally the name of a purple-colored flower, and then became the word for the color itself. The Talmud (Brachot 43b, Shabbat 50b) mentions a plant called a siglei, which Rashi (there) explains is a reference to the three-petaled “violet” flower.

Another Modern Hebrew term for the color purple is lilach. Just as segol primarily refers to the violet flower and was later extended to refer to the color, so too was lilach (“lilac”) a term originally used for the lilac flower and later extended to mean the color. The same is true of the Modern Hebrew words for “lavender” and “mauve,” which are also recognized by the Academy of the Hebrew Language as different words for “purple.”

For more information about the meaning of argaman, see Kuntres Merkavo Argaman by Rabbi Yisrael Rosenberg of Lakewood. Many of the ideas and sources discussed in this essay were inspired by that work.