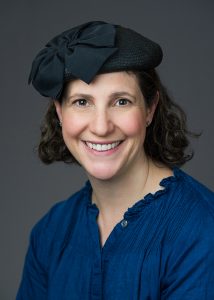 Recently I came across a post which mentioned that Female Orthodox “Rabbah” Sara Hurwitz, recently ordained by Modern Orthodox Rabbi Avi Weiss, “is the first Orthodox female rabbi and is a part of the Rabbinic staff at the Hebrew Institute of Riverdale.” While she may be unique and radical in being a “female Orthodox Rabbi,” she’s certainly not the first.

Regina Jonas of Germany was before her, in East Berlin in 1935, and was the first publicly done. To quote an article, “A forgotten myth” by Aryeh Dayan in HaAretz:

“Regina Jonas was born on August 3, 1902 in a poor neighborhood in Berlin, many of whose residents were religious Jews who had arrived in Germany at the end of the 19th century from Eastern Europe. Like the others, her parents also came from there, had a hard time making a living, and lived an Orthodox lifestyle. Wolf Jonas, Regina’s father, was a not particularly successful merchant, who died in 1913 and left his widow Sarah and their two children, 11-year-old Regina and 13-year-old Abraham, penniless. Elisa Klapheck, editor of the Jewish monthly Juedisches Berlin, recently published a book about the life of Regina Jonas (“Fraulein Rabbiner Jonas: The Story of the First Woman Rabbi,” 2004). Klapheck discovered that the funeral for Jonas’ father, who was buried in one of the Jewish cemeteries in the city, was paid for by the neighborhood Jewish community. 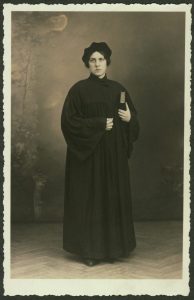 The death of Regina’s father forced her mother to move to another neighborhood with the children. In the new apartment, next to a small Orthodox synagogue not far from Alexanderplatz, Regina’s life changed. She was attracted to the atmosphere of the synagogue and the rabbi, Dr. Max Weil, who was one of the first in Germany to conduct bat-mitzvah ceremonies for girls, took her under his wing. He was the one who paved the way for her studies, first in a Jewish school and afterward in the Hochschule (high school). In 1930 she was certified there as a teacher, and began to support herself and her mother as a Judaic studies teacher.

All of Jonas’ teachers praised her dissertation, but none of them agreed to ordain her for the rabbinate. Rabbi Prof. Hanoch Albeck, her Talmud teacher, explained his refusal by saying he wasn’t willing to ordain a woman. Prof. Leo Baeck, on whom Jonas had pinned great hopes, also refused to ordain her. Baeck was then already the head of the National Representation of Jews in Germany, and attributed great importance to preserving the unity of all the branches of the community with regards to the recently established Nazi regime. Although he admired Jonas and encouraged her in her studies, he was not willing to risk this unity for her sake.

Two years later, when a rabbi was finally found who agreed to ordain her, Baeck hastened to send her a letter of congratulation. In 1942, a short time before both of them were sent to Theresienstadt, he added his signature to her ordination certificate. Even after she was ordained, and in spite of the fact that the Nazi persecutions caused the Jewish communities and the spiritual leadership in Germany to dwindle steadily, she was unable to find a congregation that was willing to hire her as a rabbi. Until she was sent to Theresienstadt she fulfilled rabbinic positions only in old-age homes and hospitals of the Jewish community.

Jonas was in Theresienstadt for a little over two years, and in October 1944 was sent with her mother to Auschwitz. Her main occupation in the ghetto, as part of Dr. Frankl’s staff, was excruciating: She greeted the trains that arrived from Germany and prepared the arrivals, all of them among the best minds of German Jewry, for the terrible reality awaiting them.

In Theresienstadt she once again met Prof. Baeck, the Reform leader who 10 years earlier had refrained from signing her ordination certificate. Unlike Jonas, Baeck survived; but until his dying day in London, in 1956, he avoided mention of Jonas’ activity in the ghetto.” 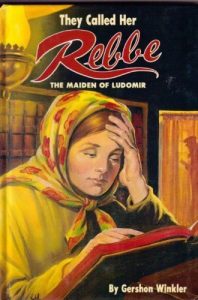 As well, there have been Frum female Rabbis in the past. Look at Rashi’s daughters who all wore Tefillin. Better yet, there was actually a female Chasidic Rebbe–yes, Rebbe–in the 1800’s. She was known as the Maiden of Ludmir. 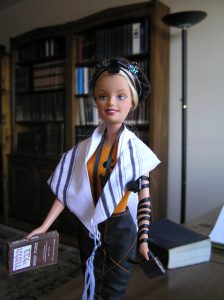 This makes one wonder what can and can’t be done. While a female is not allowed to be part of a Kehilla as a Kehilla (congregation) invokes the Shechina, and the Shechina rests on 10 men [, and not women] (source: Gemara), she STILL can do Mitzvos Aseh She’Zman Grama even though she won’t be getting the same reward as a man who’s commanded to do so. So while unusual, a woman can technically be a rabbi of an orthodox congregation. Of course, her roles would be severly reduced, and there’s always the chance she would feel bad about segregation in shul so she might combine both, thereby making the shul conservative. Also, most just aren’t ready to accept something this innovative.

Personally, while this may have been a part of our history and can be technically correct, I still find doing this offensive and a means in which it cheapens our religion. To quote a friend of mine, “We have seen enough deterioration in our beliefs and destruction of our sacred religion. when will people learn that any idea the conservative or reform movement has, just leads to a profanity of Judaism and adds to intermarriage. We have learned time and time again that an idea like this will never lead to a greater sanctification of G-d’s name which is the true purpose of a Orthodox Jew, male or female. This is just wrong on so many more levels.”

According to another friend of mine, “There is a halachik problem with women assuming authority positions. The source is the sifri (medrash) on the posuk “tasim alecha melech” (place before you a King). The sifri says melech (King) and not a malka (Queen). I think the Rambam quotes this medrash also.”

I agree with both opinions. Keep in mind though that German Orthodoxy was the most assimilated of its time in all of Europe, such that when Reformed (deformed) Judaism came out in Germany, there was a fine line between that and German Orthodox Jewish practice. Most people didn’t wear Yarmulkes in public, Rabbi Shamshon Refael Hirsch’s focus was on making people “mentchen” (law-abiding citizens) first and foremost, rather than “Yidden,” etc. Yes, RSRH was combating the Reform movement, but I’m only trying to stress the level of Frumkeit in Germany in general. No longer is a Jew defined by doing mitzvos as technically as possible. If Hashem wanted that He would have made us robots without free will. We also have to “know” by using our neshama/sechel to discern what’s “just plain wrong.”

What’s next, Barbie putting on Tefillin? That exists too!

Please let me know if I’m off on anything.