This post was taken straight from Lazer Brody’s blog without any edits.

The Midrash Tanchuma tells the story of how the Yetzer Hara (evil inclination) tried to tempt Rebbe Mattia, who sat all his days in the house of study occupying himself with Torah. The Midrash says the splendor of his countenance shone like the sun’s radiance of the sun, and that he was as handsome as an archangel. Never in his life had he raised his eyes to look at a woman.

Once, Satan passed by became full of envy when he saw Rebbe Mattia. The Satan asked, “Is it possible that there is a righteous man entirely without sin in the world?” He instantly flew upstairs,stood before Hashem and asked, “Master of the universe, Matia ben Heresh: what sort of man is Mattia ben Cheresh in Your sight?”

Hashem: “He is totally righteous.”

Satan: “Give me permission, and I will tempt him.”

Hashem: “You will not prevail over him.”

So Hashem gave him permission. The Satan went found Rebbe Matia imbersed in Torah. So he appeared to him in the guise of a beautiful woman, the like of which there had not been in the world since the days of Naamah, Tubal-Cain’s sister, on account of who even archangels went astray.

Satan (as a gorgeous woman) stood in front of Rebbe Matia, who refused to look and turned his back.

Satan went around and again stood in front of Rebbe Matia. When Rebbe Matia turned his face to still another direction, Satan was once more in front of him.

When Rebbe Matia saw that Satan [in the woman’s guise] turned up on all sides, he said to himself: “I’m afraid that the evil inclination is about to overcome me and cause me to sin. So then what the tzaddik do? He summoned one of his disciples, who acted as his attendant, and said to him: “My son, go and bring me fire and nails.”

After the pupil brought them, Rebbe Matia passed the nails through the fire, then plunged them into his own eyes.

When Satan saw this, he was shaken, all but knocked out, and left Rebbe Matia.

In that instant, the Holy One summoned Raphael, the angel of healing, and said to him, “Go and heal the eyes of Mattia ben Cheresh.”

When Raphael came and stood before him, Mattia asked, “Who are you?”

Raphael answered, “I am the angel Raphael, whom the Holy One had sent to heal your eyes.”

Mattia: “Let me be. What happened has happened.”

Raphael returned to the Holy One and reported to Him, “Master of the universe, thus-and-thus did Mattia ben Ceresh answer me.”

Hashem said, “Go and tell him: From this day and henceforth, fear not. I guarantee you in this matter that, throughout your days, the evil inclination will have no control over you.”

When Mattia ben Cheresh heard Hashem’s guarantee from the angel, he was willing to accept the angel’s healing and was healed.

Rebbe Mattia’s holy gravesite is on the outskirts of the village Aiblin in the Central Galilee, pictured below. May his holy memory protect us, amen! 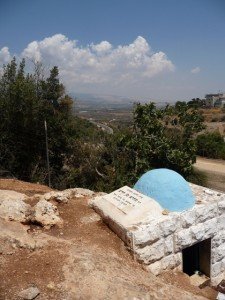