“Rabbi Judah says: Whoever does not teach his son a trade or profession teaches him to be a thief. (Talmud – Kesubos 29a)” That’s because the son won’t have any other means to support himself but by standing at crossroads and mugging people (Rashi).

People today lament that we don’t have Gedolim like in the past. Today’s Rabbis don’t reach a fraction of our past generations with regards to learning, sincerity, and piousness. Not only that, but our biggest Gedolim had side jobs, demonstrated here: 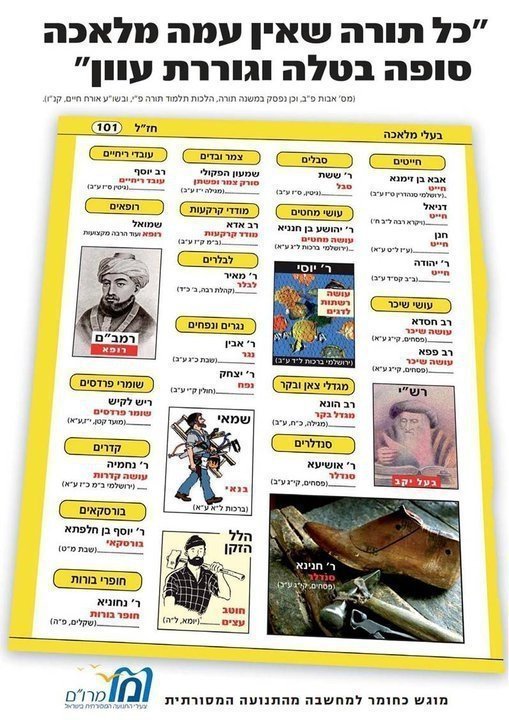 However, the traditional answer here is that the Chachamim today are for our generation, which is on a lower level than previous generations. Moshe Rabbeinu would survive here were he alive today. People wouldn’t be able to relate to him! Therefore it makes sense that we don’t have Gedolim like yesteryear.

What do we say about having no business learning if we can’t support our families?

There is something though to be said about ones learning in place of the working person who doesn’t have the time to. Yissachar used to be financially supported by Zevulun while he learned. The working person supporting the learner therefore gets a share in the learning.

However even with staying in the Torah sphere, there are many honest professions. You can teach, write Sefarim, be involved in Kiruv, perform Shchita and circumcisions, etc.

What about Kollel Guys? How do we respond to their alleged mooching?

We all work very hard whether it’s through study or work. Very rarely is there such a thing as a free buck. And to make the wives work!

We see how Rashi was a wine dealer and the Rambam was a doctor. Our Rabbis in the Gemara were tailors, blacksmiths, etc.

On the other hand, not many people know that the Rambam himself was a Kollel Avreich until the age of 35. He was financially supported by his brother David a la Yissachar-Zevulun, and only when his brother fell off a ship and drowned did the Rambam attend medical school and become a doctor.

How Kollel is compatible with our Yeshiva educational systems of today, whereas it wasn’t as needed in the past

Also, we need to look at the educational systems of yesteryear compared to today. The Yeshiva educational systems of old revolved around Torah from a very early age, and only the best of the best got in. Others grew up to be bnai Torah by family influence, not like today. In any case, those that were in “Yeshiva” learned Torah almost exclusively, giving relatively minimal importance to secular studies compared to today. Therefore their “Kollel” studies started at an early age.

Today, Yeshivas aren’t what they once were. In high school, one is lucky if one gets 5-10 pages of Gemara the whole year! It’s true.

The biggest question I see is how much time should be spent in Kollel. Rav Aharon Kotler was once quoted as saying that 3 years should be enough (source: Reb Zundel Berman, who founded Berman’s Books). Rav Hutner reportedly said 5 years (source: a relative of Dr. Yitzchok Levine who was a lifetime Chaim Berliner). But never did they say that one should stay in Kollel ones entire lifetime! That’s foolish.

Some Ways How Some Kollel Guys Abuse the System

A number of Kollel guys have undoubtedly abused the system in order to avoid getting a real job. Only in America can you make a living without working! Here are some cases without saying names:

I will end with a classic Kollel guy joke:

A young, engaged woman brought her Chosson home to meet her parents. After dinner her father asked the young man into his study for a chat. “So, what are your plans?” he began.
“I’m a beis medrash/kollel guy,” the young man replied.
“Admirable,” the father said, “but what will you do to provide a nice home for my daughter?”
“I will Shtaig/learn and Gd will provide,” he explained.
“And how will you afford to raise children?”
“Gd will provide.”
The men left the study and the mother asked her husband, “How’d it go?”
“He has no money or employment plans,” the father said. “But on the other hand, he thinks I’m Gd.”