This article was originally posted in the blog Revach. 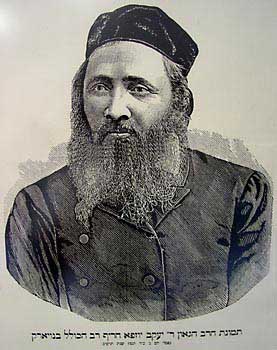 While the idea of a single Chief Rabbi worked well in the Shtetlach of Europe it did not fair as well in the great melting pot of New York circa 1890.  The difficulty of conducting a successful Chief Rabbinate is dependent on the common interests of a broad constituency, who are ready to subjugate themselves to the authority of a Rov.  New York at that time was a diverse metropolis with its Jews having diverse geographical backgrounds and a wide ranging level of torah observance.  Not to mention various financial interests that guided their opinions.  It was to this impossible situation, that the Gaon and Tzadik Rav Yaakov Yosef left the old world of Europe to come to America in 1888.
Rav Yaakov Yosef was born in 5601/1841 in Lithuania.  He learned under the Netziv in Volozhin where he was known as Rav Yaakov Charif for his sharp mind.  He was also said to have been a Talmid of Rav Yisroel Salanter and he learned in Kovno for a period.  He spent the next years as Rov of a number of towns until he ended up in Vilna as a Magid and Posek.  He was known throughout Europe as one of the Gedolei Torah.

In the late 1870’s the various Shuls in New York banded together and decided to hire Rav Meir Leibush also know as the Malbim to become the Chief Rabbi of New York.  Although he accepted the position, the Malbim passed away before coming to America.  After that, the need seemed to go away until once again in 1888, after the passing of the leading Rov in New York, the various Kehilos decided to join forces to hire a leading Gadol from Europe to become the Chief Rabbi.

After considering a list of Gedolim, it was decided to offer the position to Rav Yaakov Yosef.  Although not very eager leave Europe to go to the Treifeh Medina, heavy debts and pressure from the Gedolei HaDor including Rav Yitzchok Elchonon Spector, The Bais HaLevi of Brisk, and Rav Eliyahu Chaim Meisel of Lodz, persuaded Rav Yaakov Yosef to accept the position and set sail to the shores of the New World.

While Rav Yaakov Yosef had limited influence on the overall level of Yiddishkeit in New York due to the unbridgeable gap between his great tzidkus and the mindset of the Tzibbur, he did have influence in one of the key areas that he was hired to mend, kashrus.  Finding the kashrus situation in the slaughterhouses far below a minimum acceptable level, Rav Yaakov Yosef hired new shochtim and mashgichim.  However even in this area he did not fair very well.  Aside from the attacks he faced by the anti-religious elements of society, Rav Yaakov Yosef was brought down by the weightiest issue of the world’s biggest capitalist society, the almighty dollar (or penny in those days).  The extra cost of Kosher Shechita led to opposition by the business owners and the public.

This issue caused enough of a rift that two other opportunistic rivals were able to use this as a way to declare themselves Chief Rabbi of New York.  After this fiasco the title became meaningless.  In time the organization behind the Chief Rabbinate stopped paying Rav Yaakov Yosef’s salary, but it was taken on by the kosher butchers that he represented.  Rav Yaakov Yosef went from being a Chief Rabbi to a salaried Mashgiach.  A few years later in 1895 even the butchers stopped paying his salary.

Penniless and broken hearted, Rav Yaakov Yosef suffered a debilitating stroke that left him paralyzed while still in his mid fifties.  He lived his last five years paralyzed and in wretched poverty.

Rav Y.M. Stern in his sefer Gedolei HaDoros tells the following story about his final Drasha.  Before his death Rav Yaakov Yosef asked the people to bring him to shul against his doctor’s wishes, to give a drasha after a long period of silence.  They carried his chair to the Bimah where he mustered all his strength and started speaking.  In barely audible tones he began, “The Rambam says in Hilchos Tshuva” and then fell silent, not being able to remember the Rambam.  He tried again two, three, four times to no avail.  After a few minutes of sitting with a terribly pained look on his face he them broke into a loud voice, screaming with terror and said, “I forgot what the Rambam said.  I, who was once a Baki in all of the Torah can no longer even remember a Rambam in Hilchos Tshuva.  Look and see what is the end of a person.  I am a living example.  Learn Mussar from what happened to me and do tshuva while you can still fix yourself” and then he began to cry.

This event made a deep impression on the people of New York.  In fact Rav Yaakov Yosef received more honor after his Petira then he ever received in lifetime, with each Kehilla fighting over the privilege of burying him in their plot and offering large sums of money to his widow for the honor.  Sometimes a single person must be Moseir Nefesh and live a bitter life in order to be Misaken future generations.  New York and all of America owes a great deal of Hakoras HaTov to the Gaon and Tzadik Rav Yaakov Yosef.  Yehi Zichro Boruch!