Hey Yankel- how are you doing?
Thanks a lot for the pics you sent me. You and your son really look well fed and robust.

However, since you asked me how I am doing, I have no choice but to be honest.

Jake, oh sorry, I meant Yankel- I have known you all of my life; after all, you are my older brother.

I have always worshipped the ground you walked on and attempted to emulate all of your ways and movements.

After all, why not? While I went off to live in ‘treif America’ you settled in the land of our fathers’: Eretz Yisroel.

While I chose to use English as my spoken language, you kept to the ‘mama loshon’ and insisted on exclusively speaking Yiddish.

While I dressed in more ‘Western style dress’, you were obsessive in maintaining what you were emphatic was ‘authentic Jewish dress’.

I admired you for both of these traits.

And while me and many of my friends had no issue in using our ‘goyishe names’, you always insisted that we refer to you as Yankel and nothing else.

Although sometimes I kidded you for you obstinacy in the maintenance of these three cardinal traits of Jewish identity, in truth I envied you for what certainly seemed to me at the time as your authentic and ‘more Jewish’ lifestyle.

You are living in Meah Shearim; you have the freedom to teach your kids the way you want to; you are protected by the State; and for the most part no one- and I mean no one- interferes with your life at all.

When I came on my frequent visits to you- I was constantly amazed and happy by your financial stability and the growth of your neighborhoods.

You now have air conditioning and cell phones, beautiful Shabbos clothes and thank Hashem you purchased apartments for all of your children when they married.

In short, you were blessed by He whose blessings count and I was happy for you.

Even though you complained sometimes about all of the Americans who came through your neighborhood, privately you admitted to me that only because of those American dollars which pour through the shops and collectors of your streets were you able to make beautiful and wonderful weddings for your children.

I remember how at the last wedding of your daughter you had two video-people- one for the women and one for the men. It did make me wonder why you needed that – after all, I (the Modern American) had no video person at my son’s wedding while you had two! However, I let it pass and was happy for you.

When you came to visit I took you around and helped you raise money for your apartments with a smile and with a feeling that ‘at least there are still authentic Jews’ living an authentic Jewish life in Yerushalayim.

When the incidents occurred in Beit Shemesh, I believed what I read in the Chareidi media that this was not indicative of the feelings of most ‘authentic Jews’ and that this was the work of a ‘fringe group’. Perhaps I did not ‘really’ believe this, however, I so wanted to believe that this was true so I let it pass.

I decided not to contact you about those incidents; after all, you do not live in Beit Shemesh and after all you are a member of the Edah Chareidis an ‘official and respected’ organization.

All that was before Motzei Shabbos; on Motzei Shabbos I turned on the computer and there you were with your son- my nephew- Yossele!!!

My own brother Yankel in the middle of the melee!

Look at your smile Yankel as you proudly set your eyes on your son that you have manipulated to raise his hands in a grotesque, sickening and revolting pose which imitates that which is truly holy and pure. 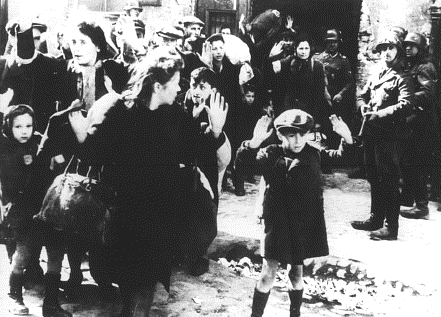 Yankel, I am sending you a copy of the ‘authentic’ (as I know you always want that which is authentic) original photograph of the scared and frightened little boy.

That boy is terrified; not knowing what life has in store for him.

Look at the other people in the photograph (I know most of them are women, however, let’s be honest Yankel, you must have studied this photo intently before you ‘offered your son’ on the alter of hate) – they are petrified and to be pitied.

Look now at you Yankel and at the other people in the picture. All of you are well fed, dressed in your Shabbos finery; having just eaten a big Shalosh Shiddush and a big Melave Malka. None of you in the picture appear truly frightened or scared.

Yankel, what did you say to little Yossele before you sullied him with the badge of hate?

What words of ‘chizuk’ did you offer to his pristine Neshama as you told him to pose in that position of mockery and as a caricature of contempt and as a parody of sarcasm.

Yankel, you know and I know it; you have benefited from the ‘Zionist State’ more than the majority of secular Israelis!

You have protection from the Arabs; dollars streaming in from tourists and students and you do not have to give back a dime.

However, after the events of Motzei Shabbos- and you have pointed this out to me- no one can claim that you are just a ‘few fringe people’.

Yankel, I must admit that you are correct, just as you have told me so many times before- you are not a fringe group.

There were hundreds if not thousands of people involved in the planning and execution of this Motzei Shabbos ‘rally’.

You had women sewing the Concentration Camp uniforms.

You had technical assistance in surfing the web to get the best Holocaust pictures.

You had printers and translators printing and translating your signs into Hebrew and English.

You had choreographers and script writers planning and practicing this complicated cavort of callous insensitivity.

In short as you had told me time and time again, you are no fringe group and you are not a few individuals as others would have us believe.

There were hundreds if not thousands of people involved in the planning and the execution of this demonstration!

And as you have pointed out to me many, many times; although we have seen rabbinic bans and protests against concerts and books; against women rabbis and against individual authors, there has never been a single signed pronouncement appearing with the names of any prominent Chareidi Rabbis who have protested or denounced your actions!

I guess Yankel you are correct. If ‘shtika K’Hodaa’ (if silence is akin to agreement) then I guess you are right, as sad as it may be.

However, Yankel, with that being said, the reason I am writing to you is really because you are my brother and I do love you dearly.

I love you with you all my heart and soul and I so cherish the good and wonderful and spiritual times we spent together singing and discussing Torah.

I remember fondly you telling me about how happy you were when you found solace and peace in the teachings of the Baal Shem Tov.

How happy you were with his love of each and every Jew and how he accepted all Jews no matter who they were and what their standing was.

You told me how he started a movement wherein each and every precious Jew could be counted and loved, irrespective of how learned he was or how he dressed.

You told how the Baal Shem Tov himself dressed as a simple Jew as he went around sharing his love for each and every Jew irrespective of their level of observance.

You told me that Hashem looks into the heart of every precious Jew and forgives their lapses.

However, that was before you sent me the picture of you and Yossele.

That was before I saw my nephew forced to pose with his hands held upright in ridicule of that which is pure and pristine.

You told me about love and now I see hate.

You told about compassion and now I see cruelty.

You told about sanctity and now I see sacrilege.

Yankel, I know you are my brother; however, Yankel I must ask you:

Often I can no longer recognize you anymore.

With all my love,

Your brother who loves and misses you.