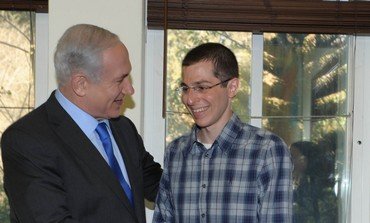 A while back YNet exposed the fact that Gilad Schalit, the MIA who recently was redeemed in exchange for 1,027 “Palestinian” terrorists last Sukkos on a Tuesday, opened up a Facebook account. His account is private and unsearchable. People (like me) would like to be his “friend” on Facebook, but the reality that everyone must realize is that he, especially he, needs his privacy.

On a different note, recently there was a clip on YouTube about Gilad Schalit visiting Israel P.M. Binyamin Netanyahu and keeping him updated. Gilad looks good – he put on 6 kilos of weight. He also went to the United States to see the NBA All-Star Game. Gilad Schalit and his parents then gave Netanyahu a large picture book with a nice poetic paragraph along with their signatures – a common gift in Israel.

Binyamin Netanyahu then wished Gilad a “Chag Herut Sameach” (a joyful freedom holiday) which not only applies to Pesach but also his own personal freedom in being liberated from Gaza.

I for one am glad that Gilad Schalit is alive and well and wish him only the very best moving forward.

← In the Court of the Tsadik
Internet Asifah – Hypocrisy? →