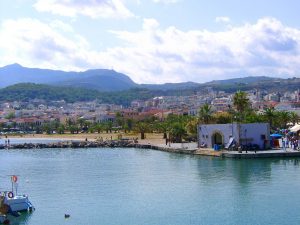 In biblical times this island was known as Kaftor. It had close relations with the Philistines, who already swelled in the Land of Canaan when the Jews migrated in, and this Kaftorland is conceivably the Philistine homeland. This cultural connection is confirmed by excavations in Palestine, and not only in Philistine regions either, but also in purely Jewish territories. Objects of the culture of Crete, such as barrels, tools, and jewelry of all kinds have been found.

One of the largest islands of the eastern Mediterranean, Crete became a destination for Jewish migration in Hellenistic times. In the Crete-ish city of Gortyna, there appears to have been a Jewish community as early as 140 BCE. In any event, when the Romans occupied Crete in 67 BCE, they definitely found Jewish settlements. The false messiah Alexander, who pretended to be a son of King Herod, was able to find followers and financial support on Crete. The (Jewish) philosopher Philo mentioned that Crete was heavily populated with Jews.

Under the rule of Venice in the 13th century there was a Jewish rural population and communities in the capital Kandia, and in Retimo, and in the Fortress Bonifazio. The Jews occupied themselves with leatherworking and butchery, and also in the production of very famous clothing and veils. Their occupations were agriculture, trade, and banking.

At the end of the 14th century the indigenous Jewish population received an influx of Jews from Spain (1391) and Venice (1394), followed by another strong wave of Sephardic Jews from Spain in 1492. Jewelry from the synagogues was sold off in order to pay ransom for captive Jews and buy passage on ships to bring them to Crete.

As is the case of so many of the other islands of the eastern Mediterranean Sea, the ensuing centuries saw a decline in the Jewish population. In 1897, there was a total of 1,150 Jews on Crete, who lived mainly in Kanea; by 1930 there were scarcely 600.