Torah scholar Zechariya Brashi was born in 1900, and recently celebrated his 112th birthday. He spoke to Arutz Sheva about health, diplomacy, and his hopes for the future.

The secret to long life, Brashi said, is proper eating. “Eating just enough,” he said. “One should wake up early and eat a slice of bread with water, only water. Even if he isn’t always hungry in the morning.”

In addition, he said, “one should take care with foods he enjoys, and be careful not to eat his fill.”

When asked if Israel will make peace with the Arab world, Brashi said, “I don’t think so… There’s no chance. There will never be peace between Esau and Yaakov.” 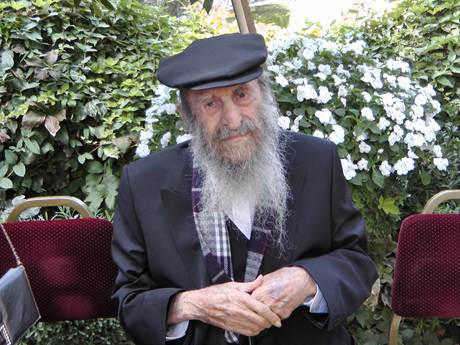 He added that he hopes for peace in Israel’s future. “That would be wonderful,” he said. However, he added, “Prime Minister Netanyahu says our hands are extended in peace, but among the Arab countries there are those who do not want to hear us… Many years have passed and we remain in the same situation.”

Brashi was born in Kurdistan, and came to Israel in 1936. He has lived in Jerusalem ever since. He spends his days studying Torah and writes books about the Jewish mystical text the Zohar. Brashi has many descendants, and is often visited by his grandchildren and greatgranchildren.

← Simpsons – Dreidel – Son, They Call It a Droodle
Sun or Moon →